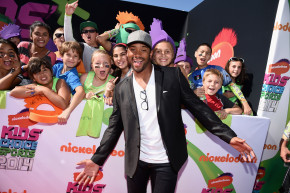 Russell Wilson Rubs His Brand All Over The Seattle Arena Scam

Russell Wilson, recent sex-haver and professional football player, has decided to lend his star power to the investment group that wants to build a brand new arena in Seattle.

I'm excited to announce I've partnered w/ the Sonics Arena Group to help bring the @NBA & @NHL to the best fan base in the world.

Roll the happy, shiny statements that provide no actual information about what Wilson will actually do or what chunk of his estimated $42 million dollar net worth he’ll be ponying up. Via the Associated Press:

“I’m blessed and excited to partner with Chris, Wally, Pete and Erik, and the greatest fans in all of sports to bring the SODO arena to our beloved city; there is no place like the Emerald City,” Wilson said. “The positive impact sports has on our kids and many generations to come, and bringing different cultures and people together is what motivates and inspires me.”

Try to imagine a more Russell Wilson-ish press release than that one right there. Sports are an a priori good, you see, just ask the very wealthy men that Wilson has developed such a close, personal, and not at all financial bond with that he can’t help but refer to them by their first names There’s a tinge of religiosity but nothing overt, a hand wave to the rabid, self-aggrandizing “12th Man” crowd, and a progressive-sounding bit about inclusiveness, just to make sure all the necessary boxes have been checked.

Anyway, Chris Hansen, the public face of the attempt to revive the Seattle SuperSonics ever since the prior owners lied about their desire to bolt town, is also really, really happy about landing a new business buddy (also via the Associated Press):

“We couldn’t be more thrilled that Russell is joining our partnership and continued efforts to bring the NBA and NHL back to Seattle,” Hansen said. “As you are all aware, we have always kept our focus on doing this for the right reasons — our love for our city, our love of basketball, and our belief that pro-sports has the ability to positively influence our youth and bring communities together in a way very few things in this world can.”

So, why was Russell Wilson enlisted? We’re speculating here, but Team Hansen’s fabulous palace will not get built in the Sodo district unless they can convince one city council member to change her vote. Still, it’s hard to see how Wilson appearing for a photo op here and there might move anyone’s internal needle, especially considering local beloved baseball man Felix Hernandez was already on board, but hey, if you’re waging a a public relations battle, every square inch of positive coverage counts, and Seattle sports enthusiasts do dig Russ.

For Wilson, there’s little downside, unlike his investment in and public endorsement of a sham ‘recovery water’ that he claimed — and then denied he’d claimed — had “miraculous” curative powers, including preventing concussions. If the arena becomes a reality, he’s got a (probably tiny) stake at a time when NBA teams are raking in profit. If not, well, gosh golly, he gave it his level best.

Also, Hansen might be getting nervous about the competition. You see, the good old KeyArena is still sitting there, and for a mere $285 million it could be upgraded to serve as the home of an expansion NBA and/or NHL team, thus removing Hansen from the picture. That alternative plan has some wealthy backers as well, including Irving Azoff, former AEG CEO Tim Leiweke, and some current AEG bigwigs, if fewer celebrity athletes. They want in on the action, and they’re readying their own proposal to be put up for a vote, possibly as soon as January 2017.

To be clear, they too will want some form of tax breaks and other publically-gifted goodies, no matter how much Leiweke claims, “We understand that the private sector is going to have to do the heavy lifting here.”

Which gaggle of billionaires and millionares will win out? Stay tuned!