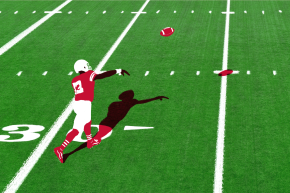 Why Do NFL Teams Suck At Sacks Now?
By Joe Lemire

Why Do NFL Teams Suck At Sacks Now?

When Peyton Manning ran the Indianapolis Colts offense, the mantras governing play-calling were “move the sticks” and “get the ball out,” offensive line coach Howard Mudd said.

Taking the lead of Bill Walsh’s famed West Coast offense, Manning’s Colts as well as Tom Brady’s Patriots have revolutionized the NFL, embracing the short-passing game and inspiring virtually every other play caller to follow suit.

The impact on the sport has been enormous: passing yards, touchdowns, and completion percentage are at record highs, and scoring is a half-point per game shy of 2013’s record pace.

Despite defenses facing more passing downs than ever before, pass rushers are having an historically hard time reaching the quarterback despite the extra practice and the lessened element of surprise. Sack rates are at an all-time low, with defenses wrapping up the passer behind the line of scrimmage on just 5.8 percent of all attempted passes. (The gross total number of sacks is projected for a moderate year-end amount, owing to the unprecedented volume of pass plays.)

“It must be that the offensive line is just unbelievable, right?” Giants center Weston Richberg said with a smile.

Not necessarily. In fact, paradoxically, some argue an opposite evaluation: offensive line play may be the culprit.

“Offensive line play, I believe, is deteriorating,” ESPN analyst Louis Riddick, a six-year safety who then scouted and worked in player personnel for a dozen years, said. “I think the athletes that are rushing the passer are as good as ever. Then why aren’t people getting to the quarterback? It’s because offenses have changed. Offenses are very much quick-strike offenses, meaning shorter drops, a lot more wide receiver screens.”

Short passes, he added, will not necessarily translate to a better chance of scoring because such drives require so many consecutively successful first downs. “It’s more and more out of necessity,” Riddick said. His colleague Bill Polian, a Hall of Fame executive, has called the worsening line performance an “epidemic” and a “sad state of affairs.”

Whatever the motivation for the shortening of the passing game—there is also value in getting the ball to playmakers quickly, safely, and with space to create—it stands out as the single primary reason for the reduction in sacks. The line doesn’t have to do its job for as long as it used to.

The average NFL pass, as of late last month, traveled only 7.95 yards past the the line of scrimmage, “by far” the shortest distance in the 11 years ESPN has tracked the data, Riddick reported. Relatedly, the average time from snap to throw has declined yearly, from 2.78 seconds in 2013 to 2.65 in 2016, according to Pro Football Focus’ analytics director Nathan Jahnke, who said that “doesn’t seem like much, just a point-one-three difference, but it’s still significant considering how fast passing plays occur.” (The Patriots are ahead of the trend, having declined to 2.26 seconds last season).

“That’s the goal, to see if we can get the ball out quickly and get it into our playmakers’ hands,” Giants quarterback Eli Manning said. “You’ve got to mix it up—obviously you’ve got to hold the ball some—but our goal to see if we can get it out fast and get it out quickly and don’t put that offensive line in a bind where we’re doing a lot of seven-step drops.”

The Giants are a good case study. They are among the sport’s top-five offenses for protecting the passer yet in the bottom-five defenses for sacking opposing quarterbacks.

They have allowed a sack on just 3.6 percent of pass attempts, but it’s worth noting they also rank in the bottom-10 for shortest passes, with the average reception just 5.7 yards downfield. That distance-at-reception stat has been compiled by STATS, LLC for the last 25 seasons; the NFL’s eight shortest yardage measures have all occurred within the last nine seasons.

“It gives us an advantage [if] they want to set up a stunt game or a twist or something like that,” Giants tackle Will Beatty said. “By the time it takes them to twist around, the ball’s gone. You’re still in your pass rush, and the ball’s gone.

“The shorter game gives you that lesser time to maintain the pocket.”

At the same, the Giants’ use of the shotgun—which, of course, sets Manning back a few yards from center and increases the distance pass rushers must cover—has more than doubled in the last decade. In 2006, New York ran 32 percent of all plays from the gun; that figure is now 75 percent in 2016. That approximates the league-wide deployment: in 1998, the first year for which Pro-Football-Reference has snap data, 9.8 percent of all plays were in the shotgun, which doubled to 19.4 percent in 2006 and escalated to 61.6 percent last season.

So why are there still so many quarterback injuries? They’re still getting hit at a high rate. That a passer’s release is a fraction of a second quicker is turning sacks into what the league tallies as QB hits. The NFL averaged 2,500 QB hits from 2009 through 2014 before it jumped to 2,864 last season and is on pace for 2,816 this season.

“Saying that the sacks are down doesn’t necessarily mean that the quarterback isn’t bothered more,” Mudd said. “He has less time today than he did 30 years ago.”

The Giants lavished one of those top contracts on Olivier Vernon, yet the team entered Monday Night Football with only 11 sacks, the fewest in the league. “We say it all the time, really: Stats are for losers,” Giants coach Ben McAdoo said recently. (New York had three  sacks during MNF and now rank 30th of 32.)

“They acquire talent for the specific purpose of bothering the passing game by beating the offensive linemen in front of them—superior athletes to the guys that are blocking,” Mudd said. “The phenomenon has been there for a long time, but it’s more prevalent now.”

All of this is in spite of the “Blind Side” phenomenon, in which NFL organizations began valuing offensive tackles who protect a quarterback’s back. Left tackles, who fill that role for right-handed quarterbacks, annually rank among the game’s highest-paid players. Many analysts believe the college game’s increased reliance on quick-hitting plays from the spread offense have hindered skill development for more pro-style passing attacks.

“It’s been consistently getting worse these past couple years,” Jahnke said, noting a leveling off of line play this season. “I think the trend has stopped, but 2016 is still worse than it was two, three years ago.”

Beatty said an uptick in defensive holding penalties against pass rushers for trying to throw linemen to the ground has helped. The league’s enhanced enforcement of pass defense penalties (interference and illegal contact), which followed a dismal passing season in 2003, has helped receivers spring free more easily.

For now, the NFL’s sack race will continue, with richer contracts for meager totals and no end in sight.