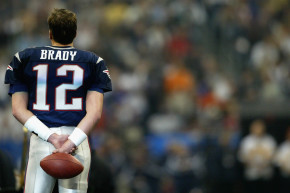 Tom Brady Still Won’t Say If He Voted For Trump, Is A Coward
By Robert Silverman

Tom Brady Still Won’t Say If He Voted For Trump, Is A Coward

Despite committing to publicly sharing his vote, Tom Brady is still trying to stick to sports

During Tom Brady’s weekly appearance on WEEI’s Kirk and Callahan radio show, it was assumed he’d finally let spill who he voted for in the presidential election, but, like a coward, Brady punted.

“I know, I know, but I’m not talking politics anymore,” Brady said. “I’ve got other things to worry about. Just speaking with my family, it’s a bad idea. I know I told you I would, and then after I told you I would I changed my mind.”

What a nice luxury that must be, to be able to concentrate on whatever personal issues or nagging concerns might flit into his mind, like whether or not to finally taste a strawberry. He can just shuck any responsibility he might bear for the acts of hatred committed in the name of his “good friend” in the past week, let alone the cavalcade of horrors that are sure to follow with a white nationalist installed as chief strategist, as if it didn’t happen.

So, did Brady say it was fine for Trump to take the stage in New Hampshire the night before the election and reveal that he’d gotten a phone call from Brady pledging his support? Again, Brady won’t say, dodging the question like some NFL scribe had asked if he thought the Patriots were jobbed by the refs on Sunday.

“I just don’t want to get into it, I really don’t,” he said. “There’s nothing positive that comes of it. There’s been so much negativity over the last week. I’m a positive person and I just want to keep things positive.”

But is Tom Brady happy about all this, Kirk and Callahan wanted to know. That’s what matters, really. Not the dangerously incompetent and disinterested (at best) monster that now has access to the most powerful military arsenal the world has ever known at a time when the executive branch wields near-unchecked powers; what’s important is Tom Brady’s emotional state.

“I don’t want to express any emotions and any feelings,” said Brady. “You know what I am? I’m hopeful and optimistic our country and move forward. I’m happy the election is over. I’m sure a lot of other people are. I’m going to focus on football.”

Uh huh. I bet he does. Especially since 68.7 percent of his colleagues in the NFL are African-Americans, eight of whom told Bleacher Report’s Mike Freeman in the starkest terms possible that if they knew a teammate voted for Trump it is not something that could be wiped away nor forgiven. And no matter how tightly the white dude they line up next to every week screwed himself into a Gordian knot trying to erase Trump’s racism or declare that race wasn’t a factor in his choice, it didn’t matter.

“If you voted for Trump,” an unnamed black player said. “I don’t trust you.”

No, Tom Brady, you don’t deserve their trust. And you don’t get to wipe away the last 15 months’ worth of winking, smirking non-endorsements for a fascist either. This is who you are.

cheers to NBC for using only the most sinister photos pic.twitter.com/7mKUPfnEuX