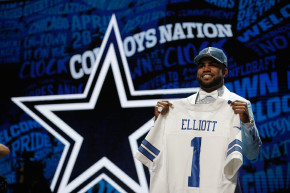 The Cowboys running back, who could be MVP, remains under league investigation for alleged domestic violence

A trio of ESPN headlines in the last week highlight the decision the NFL must make regarding Dallas Cowboys rookie running back Ezekiel Elliott.

Elliott scored three touchdowns in the Cowboys’ comeback win on Sunday and now has more than 1,000 rushing yards through nine games, prompting columnist Dan Graziano (among others) to write that “Ezekiel Elliott deserves to be the league’s MVP.”

Noted within that story, however, is this very 21st-century NFL disclaimer: “Their greatest current fear, as a matter of fact, is that commissioner Roger Goodell might take him off the field,” referring to a weekend report from Adam Schefter indicating that the league is continuing to investigate a pair of domestic violence allegations made by the same woman. One incident allegedly occurred in Florida back in February and the other in Ohio in July; Elliott has denied the allegations and has not been charged in either case. Still, someone close to Elliott told ESPN that the rookie remains “Public Enemy No. 1” for league investigators.

Compounding matters further for Dallas is a reported interaction between Cowboys owner Jerry Jones and NFL special counsel for investigations Lisa Friel. Jones is said to have approached Friel during the league’s recent owners’ meetings and said, referring to her investigative acumen, “Your bread and butter is going to get both of us thrown out on the street,” according to ESPN The Magazine reporter Seth Wickersham, in an apparent effort to dissuade her from pressing matters.

Jones has also told his official team website that he believes he has full information regarding Elliott’s background and isn’t worried about a suspension, “Everything that I know regarding any of Zeke’s behavior makes me satisfied that we don’t have any issue.”

That said, CBSSports.com has also reported that Elliott could face “a lengthy suspension,” pending the outcome of the NFL investigation. That was before USA Today reported the February incident (which was two months before he was drafted) but did include the five alleged counts of domestic abuse from July, for which local authorities declined to press charges because of “conflicting and inconsistent information.”

Robert S. Tobias, principal assistant city attorney in Columbus and director of its prosecution resources unit, wrote an email to USA Today, “For the Ezekiel Elliott matter, I personally believe that there were a series of interactions between Mr. Elliott and [his accuser] where violence occurred. However, given the totality of the circumstances, I could not firmly conclude exactly what happened. Saying something happened versus having sufficient evidence to criminally charge someone are two completely different things. Charging decisions are taken very seriously and we use best efforts to conduct thorough and detailed investigations.”

Remember, charges or a conviction are not necessary for a league ban. The NFL’s personal conduct policy, which was revised in 2014, specifically states, “Even if your conduct does not result in a criminal conviction, if the league finds that you have engaged in conduct [prohibited by the policy], you will be subject to discipline.”

Dallas Morning News columnist Tim Cowlishaw opined that he does not foresee a suspension unless the NFL heeds “a perceived need to take an extraordinarily (and uncustomary) strong stand against domestic violence could slam on the brakes.” Just recently, the NFL took heat for initially banning Giants kicker Josh Brown only one game despite an apparent abundance of evidence that investigators simply hadn’t yet found. No wonder issuing a suspension under the league’s own policy would be an “uncustomary” stand against domestic violence.

Schefter’s sources told him the NFL is being diligent to ensure there are “zero mistakes” made while investigating Elliott, as there famously were with former Ravens running back Ray Rice (and Brown). The question in this case is whether Elliott’s profile will play a role in how the NFL moves forward. All players should be treated equally—in theory—but the fact that Elliott is on track for an MVP season makes the league’s handling of his investigation that much more fraught. Even the slightest whiff of favoritism will bring forth an avalanche of public damnation at a time when the league’s ratings are already declining for reasons that remain unclear.

“Discipline will be imposed if it is warranted,” NFL spokesman Brian McCarthy told the Washington Post. “The review is ongoing under the personal conduct policy.”

The league’s definition of “warranted” has, to date, been lacking.