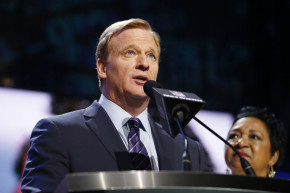 NFL commissioner Roger Goodell does not have a LinkedIn page and thus we can only speculate on this, but a list of his endorsed skills would likely not include self-awareness.

This much has been evident for a while but especially rang true on Thursday when Goodell addressed Donald Trump’s commentary about women while appearing at the New York Times’ Dealbook Conference.

“Listen, it makes my job harder at home, too. I have twin daughters and a wife and so I have to explain that to them. So yes, on that front. Does it make it harder publicly?

“Listen, I think our country has to have more respect for one another and we have to unite. I saw some very positive signs of that yesterday with our current president, Hillary Clinton’s comments publicly and others coming together and saying, ‘We have to get together, we have to unite, we have to address some of the issues and work together.’ President Trump is our president so let’s get behind him.”

We’re listening, Roger, but are you? The biggest stain on your tenure as commissioner is how the league has responded to domestic violence incidents: Ray Rice, Greg Hardy, Josh Brown. The initially light punishments for each made it awfully hard for millions at home to reconcile watching Hardy and Brown play after arrests for assault. Hardy played Week 1 before his deactivation on the commissioner’s exempt list while Brown was handed just a one-game ban, despite a league-mandated six-game suspension for first infractions. (Hardy’s case was later dismissed during an appeal when his accuser did not appear in court; charges against Brown were dropped, although police documents showed that he admitted to abuse.) Rice received a two-game ban at first, which only grew after surveillance video emerged.

It’s no wonder that USA Today’s Nancy Armour recently opened a column (during the league’s pink-wearing publicity stunt for breast cancer awareness) with the line, “There’s not enough pink in the world to whitewash the NFL’s continued disregard for women.” Later, she quotes a report from King County (Wash.) Detective Robin Ostrum, who said of Brown’s wife, “Molly was very upfront that in her experience, the NFL publicly says that they have a no tolerance policy on domestic violence, but the reality is that they do more crisis management and look to cover things up.”

Goodell on Thursday noted the purported success of the revised personal conduct policy that went into effect two years ago, noting that arrests declined 40 percent last year and are down another 30 percent.

“I don’t think people understand the complexity of these issues like domestic violence,” Goodell reportedly said. “People hold the NFL to a very high standard.”

Goodell and the league expended a lot of time and money fighting Tom Brady over silly ol’ Deflategate to ensure that he preserved nearly absolute, authoritarian rule of the NFL and sole discretion for doling out punishment, so maybe it’s time he held himself to a higher standard in using that power.