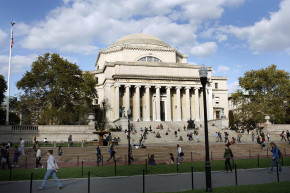 Columbia Wrestling Team Under Investigation For Being Awful
By Robert Silverman

Columbia Wrestling Team Under Investigation For Being Awful

Screenshots from a messaging app, allegedly sent by the team, were published by a campus blog

Here are some words that the men — scratch that. Here are some words the fragile, hateful, bigoted, sexist, racist, homophobic, loathsome, and stupid little boys —  of the Columbia University wrestling team said, according to reports. They said them to each other, thinking they were alone and that their words would never be heard, protected by an online a safe space. They snickered and chortled while unleashing a torrent of disgusting dreck, because this is what men who are still stuck in perpetual adolescence do when they’re left alone.

Screenshots purported to have been taken from a mobile group messaging app used by the senior members of the wrestling team over a two-year period were sent by an unnamed source to a Columbia campus news site, Bwog which published them on Thursday. Though Bwog did not state how or whether they verified that the images they received were accurate, the University has launched an investigation and cancelled this weekend’s opening match, scheduled to be held at Binghamton University

These words were written during the protests in Ferguson: [all quotes sic]

“Yo [redacted] did u see any of those nigs in North St. Louis protesting that teenager getting shot by cops”

“There such fucking nigs dude, so far the only places that have been looked was a rim shop and a pawn shop.

“Haha he’s such a nigger though that’s all he is.”

“When I think of nigs stealing shit from pawn shops and liquor stores I think of him.”

These words were written in a conversation about time as an abstract concept:

“time is for pussies”

These words were written about women:

“you fucked a bald black girl so you came out like two months ago, basically”

“Ya that was a just a joke, let’s get real. How would I obtain a gf. I barely pull nigs.”

“Dude no lie we would run the town of any state school fuck those feminist bitches.” “They’re not all feminists birchs s”

These words were written when a campus-wide, biannual party was cancelled in an attempt to deal with sexual assault:

“I hope someone actually gets sexually assaulted..”

And this was written apropos of nothing:

“We got a missing faggot no jews back at Claremont”

To date, the team has refrained from commenting, but in a statement the school said, “Columbia University has zero tolerance in its athletics programs for the group messaging and texts sent by several members of the men’s varsity wrestling team. They are appalling, at odds with the core values of the University, violate team guidelines, and have no place in our community.”

Maybe not. But like the Harvard Men’s Soccer Team, whose entire season was cancelled when it was revealed that as a matter of tradition, they can only understand and value women by the degree to which they would like to put their penises inside them, this basic disregard for the humanity of anyone that’s not a white straight male is all-too common.

This is “Locker Room Talk.”