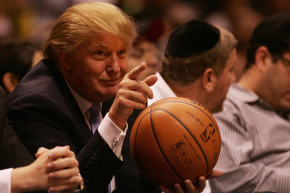 The NBA Is Terrified Of Donald Trump
By Robert Silverman

The NBA Is Terrified Of Donald Trump

Like many Americans, NBA players and coaches were struggling to cope with an election night decision that threatens to plunge the nation head first into a dystopic hellscape.

Stan Van Gundy, the Detroit Pistons head coach and president of basketball operations, saw that his charges were noticeably quiet on Wednesday. His first thought was that they were still pissed about a bad loss the day before, but after speaking with backup center Aron Baynes, he quickly realized what caused the grim collective mood. And then he went off.

“I don’t think anybody can deny [Donald Trump] is openly and brazenly racist and misogynistic and ethnic-centric, and say, ‘That’s OK with us, we’re going to vote for him anyway.’” he said, according to the Detroit Free Press. “We have just thrown a good part of our population under the bus, and I have problems with thinking that this is where we are as a country

“It’s tough when you want there to be some respect and dignity and there hasn’t been any and then you walk into a room with your daughter and your wife, who’ve basically been insulted by his comments, and they’re distraught,” he said. “And you walk in and you see the faces of your players, most of them who have been insulted directly as minorities, it’s sort of shocking. It really is. We talked about it as a team this morning. I don’t know what else to say… I thought we were better than this.”

Steve Kerr — "this is my rant" — for 2+ minutes on the presidential election: "Maybe we should've seen this coming" pic.twitter.com/MJOcSdXxHH

Carmelo Anthony urged people to seek out practical solutions and encouraged grassroots activism. Still, he’s worried. “I talked to kids today and this morning, my family, you can just hear the nervousness, they are afraid and don’t know what to think, and people don’t know what to do at this point,” he said

As I woke up today looking and searching for answers on what has happened this song hit it right on the head! If we continue the faith(as hard as it may be to do so) we will BE ALRIGHT!! Parents and leaders of our children please let them know they can still change the world for the better! Don’t lose a bit of faith! They’re our future and we must remain stronger than ever!! Yes we all wanna lace up the boots, put on the hard hats and strike but that’s not the answer. Love, genuine LOVE and FAITH will be the only thing that can get us through this. Minorities and Women in all please know that this isn’t the end, it’s just a very challenging obstacle that we will overcome!! The man above will never put something in our paths that we can handle no matter how difficult it may feel/be! To all the youth out there I PROMISE I’ll continue to lead u guys every single day without no hesitation!! Time to educate and even more mold my children into being the greatest model citizens they can become in life! They will continue the legacy beyond life! Lastly, Even if whos now in office doesn’t, Know that I LOVE YOU’LL!!!

His teammate, J.R. Smith, also took to Instagram, though he wasn’t nearly as hopeful

How do you explain to this face what happen? You can be a educated women in your field an not get the job because your a women or cause your black? How do you say “go try your best” even though it won’t be good enough. How do I even feel confident sending her on play dates knowing the kids family voted for the racist, sexist person an I don’t know how they will treat her when she’s gone. How? Seriously How? I understand let go and let God! But damn! A photo posted by JR Smith (@teamswish) on Nov 9, 2016 at 7:16am PST

(As always, do not read the comments under James’ and Smith’s postings.)

Tony Allen too expressed some optimism, but like many of us, didn’t seem to want to get out of bed and confront this waking nightmare.

But for David West, the results of the election reveal that not much ‘progress’ was attained over the last eight years. “This whole fairytale about a post-racial utopia that Obama supposedly created is all bullshit,” he said. “This nation has not moved a thread”

David West called the election disappointing: "A lot of the things (Trump) was saying publicly, a majority of this country feels privately" pic.twitter.com/E65ZQXLUiy

As is his wont, Russell Westbrook kept it brief. “I didn’t vote for Trump. I’ll tell you that much,” he said. “So, that’s all I’m going to say.”

Westbrook on the election: pic.twitter.com/hIMgxaccXM

Ballislife.com collected tweets from a wide range of current NBA athletes, and there’s a mix of fear, gallows humor, rage, shock, and one admitted Trump backer.

I knew everyone was lying when they said they weren't voting for Trump. Trump is America's alter ego!

President-elect Trump [visibly twitches] will be visiting the White House today. As long as everyone sticks to the schedule, he’ll miss running into the Cleveland Cavaliers by about an hour.

Odds are, he won’t have the privilege of meeting the champs for the next four years [can’t stop twitching, curls up in fetal ball] either.