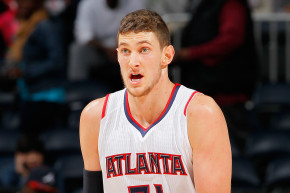 Large Sports Man Dunks And Falls On His Butt

Here's video of the large sports man falling on his butt

Mike Muscala is a 6’11” relatively unathletic forward/center out of Bucknell with a feathery jumper. After being selected in the second round of the 2013 NBA draft by the Atlanta Hawks, he spent a season abroad in La Liga ACB with Río Natura Monbús Obradoiro. Muscala then signed with Atlanta, but received minimal playing time during his first few years, unable to crack a deep, talented Hawks rotation.

That’s who Mike Muscala is, more or less, in case you wanted to know. Anyway, on Tuesday night, the Hawks took on the Cleveland Cavaliers. The ball was pinging around the perimeter before landing in Thabo Sefolosha’s mitts. Isolated against Tristan Thompson, he drove to the rim and fired up an awkward bank shot that caught iron. Muscala, lurking on the weak side and blissfully unaware of what may have been transpiring in the world, soared up and up, reaching heights that heretofore might only have been attainable in his dreams. And as if this scenario had been scripted by the most aspirational chunks of Muscala’s amygdala, there stood LeBron James, the greatest basketball-playing human around, noticeably failing to box out, and serving as a mere spectator to Muscala’s ferocious putback dunk.

Gravity soon took hold and Muscala tumbled down, down, landing squarely on his butt.

He’s fine. In case you wanted to read about a sports thing that happened and might regret relishing in the obvious, giddy delights to be found in a large man smacking his butt against a hard surface, don’t worry. You can. You can also go ahead watch this stupid sports thing, marvel at the high point of Muscala’s career, and still care about sports, even on a day like today. Or not. That’s okay too.

If you’d rather laugh at the not-as-large-as-Mike Muscala-but-still-pretty-big furry blue bear who serves as the Memphis Grizzlies’ mascot stripping off his uniform and grinding and twerking to the song “Pony” by Ginuwine, that’s another sports butt thing that happened. Here it is.

For your viewing pleasure: @grizz dancing to @Ginuwine's Pony. pic.twitter.com/uySCMjagfT