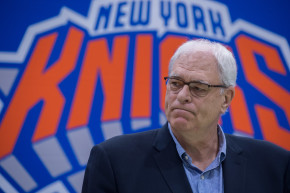 As the would-be guru presses for more of the triangle offense and makes bizarre decisions, the Knicks are left to go on suffering

The Knicks, because they are the Knicks, find themselves enmeshed in some good old fashioned, tabloid-y drama a scant six games into the season.

First, someone who’s been privy to Phil Jackson’s grumbling dissatisfaction whispered to Ian Begley that Big Chief Triangle isn’t thrilled with the lack of geometric shapes in the team’s offense.

Phil Jackson hasn’t been pleased with the New York Knicks’ performance on offense—particularly with the amount of times the team has run the triangle offense—during their 2-4 start, league sources told ESPN.

This should be fun! Before we go any further, if “sources” are blabbing to ESPN, you can be assured that it’s being done so with Jackson’s stated or tacit approval. Whether he’s making a public stink to nudge a head coach that doesn’t doesn’t want to run the triangle qua triangle or to sound a warning to a few Knicks that have rightly questioned his beloved, archaic triple post offense and are tired of hearing about it, that’s usually how this goes. (The whispers from unnamed players in Begley’s article voicing their dislike of the triangle were not a part of some multi-level chess move by Phil, to be clear. They’re just pissed.)

It’s also worth noting that right after New York rang up an impressive 111 points on the Memphis Grizzlies in their home opener, Jackson returned from the astral plane with a sacred parchment of triangle dogma in tow. At the next day’s practice, he made sure a few reporters were around to see him doling out tips to would-be acolytes.

Jackson is right about one thing: The Knicks aren’t running many triangle sets at all. And wouldn’t you know, it’s (kind of) working. They currently rank as the 13th best offense in the league; Kristaps Porzingis has been beasting; and Derrick Rose is starting to figure out where and when to kick the ball out after tucking his head down and barreling to the tin, netting 19 assists over the last two games after recording a mere 10 in the first four.

The problem — as has been the case, ever since Jeff Van Gundy abruptly walked off the job 10 games into the 2001 season — is the defense. Or rather, the complete lack thereof. The Knicks have finished higher than 18th in defensive rating just twice over the last 16 (16!) years, cracking the top five during the lockout-shortened 2011-12 campaign. This year, they’re dead last. And practicing against the triangle every day hasn’t helped.

So, what brilliant tactical maneuver did Phil pull out of his sage-scented, leather saddlebag? He told Kurt Rambis to go fix this.

Jeff Hornacek confirms @ESPNSteinLine's report that Kurt Rambis will coach the defense. He wanted to have one voice coaching the defense.

Kurt Rambis, who Jackson did his level best to install as the empty suit running his Vichy government before finally turning to Jeff Hornacek. Kurt Rambis, who finished 28th and 27th in defensive rating during his two-year stint running things in Minnesota. Kurt Rambis, by any objective measure a downright awful head coach, that’s who. Not that it matters much.

Jeff Hornacek on why he chose Kurt Rambis as opposed to other assistants to take over defense: "It could've been anybody."

On Kurt Rambis being put in charge of Knicks defense: Hornacek, "It could've been anybody." Rose, "It doesn't matter."

Well, that’s a tremendous show of support from Rambis’ co-workers. The most generous reading you could muster is that it’s just a clarification of duties among the staff and shouldn’t be treated as a big deal, let alone a potential threat to Hornacek’s job security or independence.

Less charitably, more and more people employed by MSG are starting to realize that Phil Jackson isn’t actually interested in building a successful basketball team or trusting his coach to install a system that suits the players on the roster. Instead, his well-paid, much heralded return is driven by a desire to craft a totem to his own ego and sticking it to the legion of critics who claim that for all his shiny ringzzz, the game has passed him by. Those critics are only being handed more fuel for the fire.