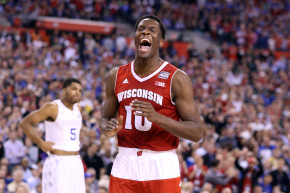 At a Wisconsin home football game on October 29, two attendees donned costumes depicting Donald Trump hanging someone dressed in prison stripes with Barack Obama and Hillary Clinton masks on either side of his head. This, needless to say, was unacceptably racist, morally repugnant, and generally inhuman.

After a weak initial response—the fans were asked to remove the masks but allowed to stay while the school protected their “free speech”—university chancellor Rebecca Blank told the faculty senate, albeit more than a week later, “I am personally very sorry for the hurt that this incident and our response to it has caused. I have heard from students, faculty and community members who are dissatisfied with our response, and I understand why. A noose is a symbol of some of the worst forms of racial hatred and intimidation in our country’s history. We understand this and we should have communicated this more forcefully from the beginning.”

As a student, I demand change from @UWMadison. pic.twitter.com/NZEaqBeevP

It’s no wonder, then, that some members of the university community are demanding stronger action. That some of the voices belong to top athletes—basketball star Nigel Hayes and starting running back Corey Clement—is helping amplify the message of racial equality. The shared letter to administrators reads, in part:

“Our experiences are not shielded by the ‘W’ we wear on our chest . . . We are loved during competition, but then subjected to racial discrimination in our everyday lives too.

“ . . . When we travel and play in other stadiums, fans have told us to get out of their country, or to go back to Africa, but it hurts to receive that treatment at home. It does not end at overt racial issues, but it is also seen through microaggressions.

“. . . Please create real programs, initiate meaningful change and understand that students of color deserve to thrive in this institution just like our peers.”

"…must be of an appropriate nature."

Noose around neck of the image of our black president in a jail suit is appropriate? pic.twitter.com/zfd5C1zr0f