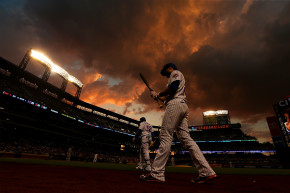 Uncertainty about the CBA will only delay the inevitable: ballplayers getting paid

Baseball’s Hot Stove is off to, well, a slow damn start. Then again, the process for the sport’s free agency has never been as tidy and condensed as, say, the NFL’s, but as baseball negotiations began on Tuesday, front offices and agencies were bracing for an even more drawn-out process than usual.

The culprit: an unsettled labor contract. While no one expects a work stoppage when Major League Baseball revenues are booming—and are expected to reach a record $10 billion—the current collective bargaining agreement expires on Dec. 1, and the going at the end has been slow with more remaining than the formality of making sure all the t’s are crossed and lowercase j’s are dotted.

In fact, according to the Associated Press, a few important sticking points remain: the league is pushing for an international draft, the union is seeking to revise the draft-pick compensation system for elite free agents, and the two sides have yet to agree where the luxury-tax (excuse me, “competitive-balance tax”) threshold should be. As a result, top free agents are unlikely to sign anytime soon.

“There’s certainly uncertainty until they do,” agent Scott Boras reportedly said. “I’m sure they’re going to want to know the impact of it. Why wouldn’t you?”

Baseball has about 160 major league free agents, of whom 10 received a qualifying offer. That is, their current employer has offered a one-year, $17.2-million contract; if the player declines, the team that signs him will have to forfeit a premium draft pick next June. At least that’s what the old rules dictate.

“The one aspect of the collective bargaining agreement that may not be resolved any time soon is this question of draft-choice compensation, which is probably what could change the market one way or the other,” Mets general manager Sandy Alderson said, per the AP. “I don’t think the new rules are going to get more onerous to the players, and it’s not clear whether they’ll be less onerous for clubs.”

In other words, a change to that system would only enhance players’ earning potential by minimizing the penalty on his new team.

That’s not to say that, when the CBA is ratified, the marquee names will all suddenly latch onto new clubs, for no small reason than there are few such talents even available. Of the 10 players to receive a qualifying offer, how many are franchise-changing stars? The Blue Jays’ Edwin Encarnacion and probably the Mets’ Yoenis Cespedes qualify, sure, but no one else does. There are plenty of good players (Ian Desmond, Neil Walker, Justin Turner, Dexter Fowler), there’s an aging star seemingly on the decline (Jose Bautista), there’s a slugger with superlative power and iffy on-base skills (Mark Trumbo), a star closer but one who has exceeded 70 innings only once (Kenley Jansen), and then there’s a pitcher who nearly wasn’t tendered a contract last offseason before being moved in a salary-dumping trade (Jeremy Hellickson).

There are a few other stars who, by virtue of being traded this season, weren’t eligible for a qualifying offer—Aroldis Chapman, Mark Melancon, Rich Hill, et al.—but that list isn’t deep, either. But when a general manager is staring at a black hole in the rear of his rotation with spring training rapidly approaching, someone will talk himself into lavishing life-changing money on Hellickson after all.

The craziest part is that, eventually, banks will still break for these players because there’s been a fundamental shift in the player market that’s taken place the last few years. Television revenue has swelled almost exponentially, which has driven a steep increase in player salaries, which prompted clubs to start signing younger players to more long-term extensions, which has only exacerbated the inflationary free-agent market further. In recent years, this trend has trickled down beyond the nine-figure earners and grown the pool of eight-figure contracts, generally with more guaranteed years, too.

So, fear not, you who are concerned that baseball-playing professionals won’t get paid properly—they will, just later in the offseason. The only one affected by this development? Those on their holiday shopping lists and Uncle Sam because those big bonuses may not come until 2017.