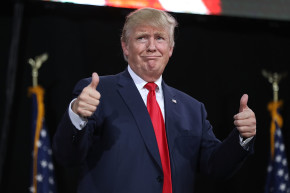 It seems Belichick did indeed endorse Trump, but Brady not so much

During a rally Monday night in New Hampshire, Donald Trump riled the crowd up by clicking off endorsements from some popular local sports men. Because this is Donald Trump, and every single word that drips out of his pursed, venal mouth should be called into question, it’s unclear what parts of this story are real. He began by asserting that Tom Brady had gotten him on the blower and given him the go ahead to reveal how he’d voted.

“Tom Brady, great guy, great friend of mine, great, great champion, unbelievable winner,” Trump said. “He called today and he said, ‘Donald, I support you, you’re my friend, and I voted for you.’”

However, while gabbing with WEEI’s Kirk and Callahan on Friday, Brady said that he had not cast a ballot yet. (Early voting in Massachusetts ended on November 4.) Giselle Bündchen also took to Instagram that same day and loudly denied that she and her hubby had any plans to back a mewling, marmalade-hued infant who is facing down a string of sexual assault allegations.

But Trump wasn’t done. He also claimed head coach Bill Belichick took time off from prepping for his upcoming game against the Seattle Seahawks to write him some nice words of support.

Standing at the podium, Trump then proceeded to read the letter aloud:

“Congratulations on a tremendous campaign. You have to help with an unbelievable slanted and negative media and have come out beautifully. You have proven to be the ultimate competitor fighter. Your leadership is amazing. I have always had tremendous respect for you for the toughness and perseverance you have displayed over the past year is remarkable. Hopefully tomorrow’s election, the results will give the opportunity to make America great again.

The above communiqué was not the original mash note that Belichick sent, mind you. Some chinless lackey working for his campaign contacted Belichick from Trump’s plane two hours before the rally kicked off, asking if it would be okay to recite it during the rally.

In Trump’s version, Belichick said sure, as long as he was permitted make a few changes. Trump was worried that the revised version wouldn’t be as much of a tongue bath, but much to his surprise, “It was much better. It was stronger,” he said.

CSN New England is reporting that Belichick did indeed fire off a letter, but according to The Nation’s Dave Zirin, during his back-and-forth with the Trump campaign, some important details may have been left out.

Very good source: yes Belichick sent the letter. No, he had no idea it would be read out loud. Play with snakes, get bitten.

If revisions did occur, it’s worth noting that the version of the letter Trump recited contains the \4th grade-level syntax and laughably over-the-top adjectives. And it’s not as if a pathological liar, like Trump, has fabricated tales about the content and nature of dialogue with NFL officials before. Oh wait. He has.

Back in July — we were so young then, still able to experience emotions beyond bile-soaked rage —Trump said the NFL had personally sent a letter kvetching about the fact that two of the scheduled presidential debates would be competing for eyeballs with Sunday Night Football. The NFL denied ever doing so, and when questioned, an aide rejiggered the story, now asserting that, “Mr. Trump was made aware of the conflicting dates by a source close to the league.”

The dates were made public as of September 2015.

Further, though he does have a gaggle of bungled and botched jocks by his side, Trump made up out of whole cloth a list of athletes that would speak on his behalf at the GOP Convention, and he falsely insisted that NASCAR as a whole, and not just CEO Brian France, had endorsed him.

So, here we are. Trying to wade through one last muddle of quasi-facts and half-remembed fictions from a candidate that truly has been the howling dumpster fire to end all howling dumpster fires. Oh, and just to throw one more bit of rancid trash into the conflagration, during his speech Trump also gave a shout out to Curt Schilling, who recently announced that he is in favor of lynching journalists.