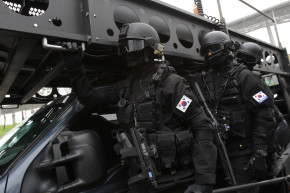 South Korean police reportedly have asked prosecutors to indict 21 people on charges related to a match-fixing scandal in the country’s top baseball league—a group that includes two active and five former players as well as, for the first time, club officials.

The most striking allegation involves Lee Sung-min of the Lotte Giants, who stands accused of walking opposing hitters on purpose in certain innings in exchange for cash. Lee was pitching for the NC Dinos at the time of the alleged incident in 2014 and, according to the news agency Yonhap, the Dinos’ general manager and operation division chief apparently learned of the match-fixing scheme but didn’t report it to the Korea Baseball Organization. They are accused of instead leaking a false rumor, suggesting that “he has good talent, but isn’t serious about playing baseball and doesn’t have a good relationship with coaching staff,” according to the police investigation.

Lee allegedly received 3 million won ($2,626) for purposefully allowing the walk and, according to the Associated Press, later confessed to NC Dinos team officials. Another former NC pitcher, Lee Tae-yang, received a suspended 10-month prison sentence for a similar scheme in August. The other active pitcher reportedly booked in the current investigation is Yoo Chang-sik of the Kia Tigers, who reportedly confessed to his team in July.

“We’d like to issue a heartfelt apology to our fans for damaging the principle of ‘clean baseball,’ which must be strictly honored above all else,” the club said in a statement, per Yonhap, and later adding: “We believe these police findings will force our club to get our act together, and baseball will become an even more trustworthy sport after this. As for the accusations that we face, we’ll find appropriate ways to explain our position, and transparently disclose our findings.”

Those leagues have been beset with several gambling-related scandals in recent years, prompting lifetime suspensions and criminal charges. Some 50 soccer players received lifetime bans from the K-League in 2012, after which the government declared a “state of emergency” over the match-fixing and corruption allegations. The problem hasn’t gone away; 11 basketball players fell under suspicion in 2015. The burgeoning eSports competitions have been susceptible, too, with the Korean prosecutor’s office convicting a well-known Starcraft player, Lee “Life” Seung Hyun in one high-profile incident.

As the Korea Times reported earlier this year, the average KBO salary set a record high of 216 million won this season, which is just shy of $190,000—a good living but hardly the mega-riches of other international sports that seem to have insulated athletes from match-fixing temptations.

While the Korean government does operate one legal sports-gambling operation, Sports Toto, wagers are capped, real names are required, and winnings are taxed—all limitations that have led to “thriving” illegal gaming sites, according to the Korea Joongang Daily. The Korea Times cited an estimate that illicit sports gambling reached 31 trillion won ($27 billion) in 2103.

Police are working to crack down: In fact, just two weeks ago, the Korea Joongang Daily reported that 16 managers of eight illegal sports gambling sites were arrested and 124 more were booked for operating groups that collectively made some $3 billion from approximately 200,000 members.