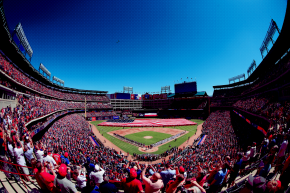 Here’s Why The Texas Rangers Want To Dump Their Stadium

When the Texas Rangers and the City of Arlington announced plans for a jointly funded new stadium back in May, the prevailing question about the deal was simple: Why?

The Ballpark in Arlington where the Rangers currently play is not just an adequate venue for watching a professional baseball game, but an exceptional one. It’s received a number of face lifts through the years, including the addition of a massive video board that rivals the legendary one in neighboring Cowboys Stadium. It has plenty of revenue drivers such as club seating and box suites, the lack of which is usually cited as a reason a team “needs” a new publicly financed stadium.

Not only is the ballpark perfectly fine, it’s only 22 years old. However, because cities across America have decided that giving billionaire sports owners free money for stadiums is good and cool, it was only a matter of time before the Rangers asked voters for another handout. Still, why so soon?

While the team has no shortage of traditional talking points to address this question, the real answer dates all the way back to the Houston Oilers. At the end of the 1995 NFL season, Oilers owner Bud Adams announced he was moving the team to Tennessee after failing multiple times to get the city to help fund a replacement for the Astrodome.

The loss of the Oilers shocked the entire state, and in response the State of Texas passed House Bill 92 in 1997, which granted city and county governments the authority to impose hotel occupancy taxes and motor vehicle rental taxes to be used for the construction of “venue projects” and—here’s the key part—only venue projects. Because the taxes involved effect “visitors” to a city rather than residents, the bill created two lucrative, politically digestible revenue streams to be used for a single purpose: building sports stadiums.

“What the state did was basically gave this enormous open authority to local governments to start imposing taxes to build sports venues,” said Dr. Heywood Sanders, a professor of public administration at the University of Texas at San Antonio. “While it requires a public vote, it made it a whole hell of a lot easier.”

In short, when a sports team from Texas wants a new stadium, the host city issues municipal bonds to raise their portion of the funding, and the hotel tax and car rental tax fund handles repayment of the bonds, which are typically scheduled over 30 years but can be longer or shorter depending on the rate at which the two taxes are generating revenue. So when the bonds are repaid, the city just does away with the hotel and car rental taxes given that they already have a venue, right?

Wrong. They just find new venues to build, however unnecessary! Because the revenue stream is big and “venue projects” is relatively narrow, numerous stadium and arena renovations, performing arts venues, civic centers, and convention centers have been funded in Texas by the hotel and rental car taxes House Bill 92 made legal.

“You can say the public isn’t paying [because the taxes are on “visitors”] but as this case should make clear, once those revenue streams are there, they’re going to keep getting reused,” Sanders said. “It’s a very perverse situation where you put a set of taxes in place, and once they’re in place it’s really easy to say well we’ll keep using them. They almost always get used in another way.”

Which brings us back to the current Rangers stadium proposal. In 2009, Cowboys Stadium opened in the City of Arlington, which used—you guessed it—municipal bonds paid for by hotel and rental car taxes to fund its portion of the cost. The bonds were issued in 2005 and were expected to be paid off over a 30-year period.

But with the Dallas-Fort Worth area doing well economically, hotel and car rental tax receipts came in at a higher rate than expected. With interest rates at historic lows, the city was also able to refinance the bonds to lower the total cost of financing. These two factors resulted in the city’s repayment schedule shrinking by 14 years, with the last check to pay off Cowboys Stadium coming in 2021.

This means there’s an unexpected availability for the hotel and car rental taxes being collected by the City of Arlington. Guess who’s making the play to get that money? The Texas Rangers, who plan on opening their new stadium in—again, you guessed it—2021.

“The better that any of those revenue streams [hotel and car rental taxes] do, the more money there is to spend on new and improved stadiums every year,” Sanders said.

If Arlington voters pass the stadium bill on Nov. 8, bonds backed by those two taxes will raise $500 million, half of the estimated $1 billion cost of the stadium. The team is responsible for the other $500 million and any cost overages, which there inevitably will be (infrastructure and tax loopholes will also inevitably lead to the city paying more than $500 million despite the agreement capping the city’s share, but that’s another argument).

What should concern Arlington voters and Rangers fans is how the team plans on raising their share. The pro-stadium camp makes it sound like the team is writing a $500 million check, but it’s highly probable that the team won’t pay anything upfront or out of pocket.

The stadium proposal states that the team can raise any portion of their share of the cost through “incremental funding,” which they define as taxes on parking and admissions tickets to any event at the stadium, not just Rangers games. Assuming the team chooses to use “incremental funding,” this means the team is merely passing off its share of the costs directly to Rangers fans or patrons of the stadium for some other event.

The kicker? This incremental funding is a tax collected by the city but counts toward the team’s share of the cost. Assuming this funding is used, the city will issue bonds on behalf of the team. Municipal bonds, bonds issued by governments, are tax exempt, which makes them more attractive to buyers. And because the city is issuing the bonds instead of the team, the bonds will have a higher credit rating and lower interest rate, meaning raising money through “incremental funding” is far cheaper than the team doing it on its own.

The agreement simply states the team reserves the right to pay its share through “incremental funding,” and for an unspecified amount, so exactly how much of the cost it plans to pass off to Rangers fans is to be determined, but given that this arrangement is highly advantageous to the team, one can assume it will be a lot.

“It’s not uncommon for teams to look for ways that don’t directly burden them to pay the non-public share, so things like permanent seat licenses to generate their share but shifting the cost to their customers,” Sanders said. “The team owner has a choice between writing a check for a few hundred million dollars or having the city borrow the money on their behalf. Obviously the latter is preferable.”

When you look at the real sources of funding for the proposed stadium, it comes from the public at large (albiet not necessarily Arlington residents) and Rangers fans directly, not the team.

Publicly financed stadiums are scams. It’s corporate welfare at its most brazen.