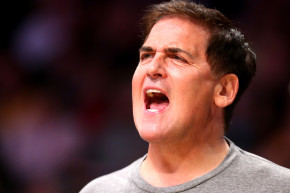 Mark Cuban’s Petty Beef With Journalists Is Getting Worse

Mark Cuban, the billionaire Dallas Mavericks owner who who struck it triple comma rich by putting the radio on the internet, has revoked the credentials of two longtime ESPN basketball reporters, Marc Stein and Tim McMahon. Further, the ban extends to all ESPN.com reporters wishing to cover the team in Dallas. Why the sudden move to throttle ESPN? For the moment, Cuban isn’t explaining himself.

Mavs owner @mcuban to @USATODAYsports on the decision to revoke season credentials of @ESPNSteinLine & @espn_macmahon pic.twitter.com/rgKNQANSck

According to MavsMoneyball.com, McMahon was cut off because his job description had changed, leaving the Mavericks beat for a wider role providing league-wide coverage. That decision didn’t set will with Cuban, again, for reasons unknown. Vocativ reached out to McMahon, but he declined to comment.

As for what sin Stein stein might have committed, though he still calls Dallas home it’s been over a decade since he left the Dallas Morning News, and, in his role as one of pro basketball’s more prominent insiders, hasn’t dropped any hot goss about Cuban or the Mavs of late.

In a statement, ESPN said it remains, “Committed to thoroughly covering the Mavs and the NBA,” despite the now three-day old blackout. Similarly, the NBA didn’t shed any light on what might have caused Cuban to pitch a snit, save that, “We are in communication with both ESPN and Mark Cuban about this matter.”

Cuban’s gotten petty in response, lashing out at another local Dallas reporter, refuting the notion that he’ll have Stein and McMahon thrown out of American Airlines Arena by the scruff of their collars. As long as they pay, that is.

Cuban didn't give reasons for Stein & McMahon media ban: “They’re not banned from the building. They can still buy a ticket.” #ESPN #NBA

So, barring any revelations of serious journalistic malpractice or ethical wrongdoing, yes, Mark Cuban, Ayn Rand fanboy, is once again revealing his general distaste for the media unless it serves his particular purposes.

In 2008, he decided he didn’t want any bloggers cluttering up his nice fancy locker room and post-game pressers, banning the lot of them, after Tim McMahon wrote some words Cuban didn’t dig about a campaign to ditch then-head coach Avery Johnson. (Cuban quickly reversed course after the NBA told him to knock it off, and he got spanked by pretty much the entire basketblogging community.)

Cuban also doesn’t see much value in online sports writing that he himself doesn’t produce. In 2011, he wrote at his personal blog — irony alert! — that while print and TV reporters are still needed for the few poor souls that don’t have internet access, anyone that’s paid to write online is useless, because their interests don’t gibe with the team.

Seriously, he wrote that earning a living in this matter might hurt his bottom line, and therefore should be done away with in favor of team-generated content on Facebook, Twitter, his blog, and Mavs.com. The horde of unpaid bloggers, however, are “welcome in the locker,” because if they spend enough time giving away the product of their work, maybe, someday, in an industry that’s hemorrhaging money, they’ll get hired. By Cuban’s warped logic, though, if the job they secure means writing online, they’re, “The least valuable of all media,” and regardless, in another blog, he wrote that press as a whole are, “the dumbest guys in the room.”

Again, we’ll take this moment to remind you that Cuban loves “The Fountainhead.”

Which is all fine. Cuban and the rest of the billionaires that own pro sports teams are free to hate the way their teams are covered. But Cuban can’t do that while defending some of the lousy, fact-free documentaries his company has backed, like Loose Change and FrackNation, based on his belief that all sides must be heard, because free speech. When asked if he’d give money to films titled “Slavery: It Wasn’t So Bad,” or “The Holocaust: The Jews Deserved It,” he told RealClearPolitics he might, as long as the film was, “well produced.”

Nor can he fret about what Donald Sterling’s banishment from the NBA might mean for the free exchange of ideas.

And for all his dumb trolling of Donald Trump during the last year, he’s never seen fit to call Trump out for the legitimate threat he represents to a free press: his banning of reporters that have dared to print the words he’s said, mocking of reporters who’ve called out his groaning lies, and ongoing promises to sue the hell out of journalistic entities he doesn’t like.