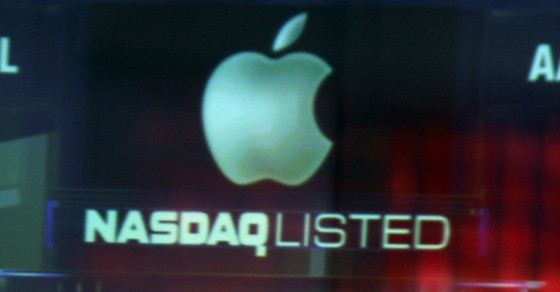 Shares of Apple AAPL closed up 1.9 percent on Tuesday, setting a new record high of $122.02. This pushes the iPhone maker’s market capitalization above $700 billion for the first time—$710.8 billion, to be exact—making it the only U.S. company to have surpassed the $700 billion mark. [Market Watch]

Researchers from the University of Lethbridge in Alberta, Canada, have run a quantum equation that suggests that the Big Bang—the explosive creation of our universe commonly accepted as having happened approximately 13.8 billion years ago—may have never occurred. [Phys.org]

After some very basic back-of-the-envelope math, we computed that the amount of water sitting on all of Boston’s 48 square miles after the blizzard is about 5 billion gallons—or roughly 0.05 percent of what it would take to quench California’s drought. [Vocativ]

The Dubai Mall in the United Arab Emirates is once again the “world’s most visited lifestyle destination,” welcoming over 80 million visitors in 2014. [Emirates 24/7 News]

South Korea’s state-run trade insurer said Tuesday it has signed a memorandum of understanding to set up a formal credit line and payment guarantee arrangement with Cuba that will allow local companies to trade with the Caribbean nation. Under the deal reached in Havana, the Korea Trade Insurance Corp. will provide 60 million euros ($67.9 million) worth of credit line to the Banco Central de Cuba and the Banco Exterior de Cuba, and establish a payment insurance arrangement. [The Korea Times]

The cost of keeping watch on Julian Assange, who is holed up in the Ecuadorean embassy in London, is proving a drain on police resources. London’s Metropolitan Police have been standing guard outside the embassy around the clock to prevent him from fleeing, at an estimated cost of about 10 million pounds ($15 million) since the operation began. [The Guardian]

A French court ordered a maternity clinic on Tuesday to pay 1.88 million euros ($2.13 million) in compensation to two families whose babies were switched at birth more than 20 years ago. [France 24]

Around 45,000 suicides worldwide each year are attributable to unemployment, according to a survey of 63 countries published Wednesday by the University of Zurich. Between 2000 and 2011—a period spanning both prosperity and the aftermath of the global financial meltdown—researchers said 233,000 suicides happened each year on average and 45,000 could be attributed to unemployment. [The Lancet Psychiatry]

President Obama is expected to announce plans on Wednesday to withdraw most of the 1,300 American troops assigned to battle the Ebola outbreak in West Africa and declare that the U.S. military effort has been successful. By the end of April, only 100 troops are expected to remain to provide support for the civilians still battling the disease. [The Wall Street Journal]

Legislators in Puerto Rico are debating a bill that would fine parents of obese children up to $800 if they don’t lose weight. The bill aims to improve children’s well-being and help parents make healthier choices. [El Universo]

Prosecutors in Taiwan’s capital have indicted 119 people over the occupation of the legislature and cabinet offices in a protest against a proposed agreement to loosen trade restrictions with rival China. Those indicted included leaders of the three weeks of protests that broke out last March and attracted hundreds of people. [People.cn]

At least two people were killed and more than 40 injured on Wednesday after a bus started a 100-vehicle pileup on a bridge near Incheon International Airport, South Korea’s main gateway, police said. [The Korea Times]

Authorities believe 19 Gourma elephants have been killed for their tusks in the past month in Mali. There are estimated to be just 350 to 500 of the group left. The Gourma elephants migrate around 370 miles a year to feed. [Press Afrik]

Jon Stewart is leaving The Daily Show behind. The host, who’s been with the show for more than 15 years, announced his departure during his Tuesday taping. [The Hollywood Reporter]

Microsoft just patched a 15-year-old bug that in some cases allows attackers to take complete control of PCs running all supported versions of Windows. The critical vulnerability will remain unpatched in Windows Server 2003, leaving that version wide open for the remaining five months Microsoft pledged to continue supporting it. [Ars Technica]

Brian Williams, the face of the NBC News division and among its most visible personalities for the past decade, has been suspended from his post at Nightly News for six months without pay after being questioned for a false account of a 2003 helicopter incident in Iraq. [The Hollywood Reporter]