How a Viral Car Ad Became a Political Parody in Ukraine 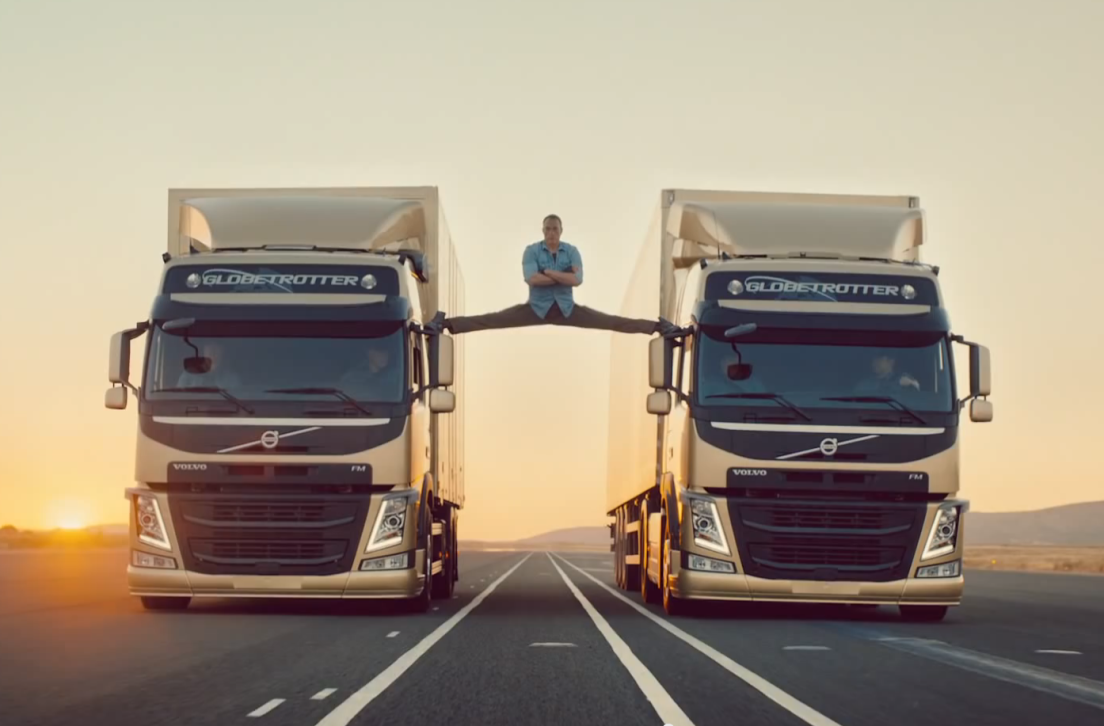 The Volvo truck ad that’s jumpstarted the career of aging action star Jean-Claude Van Damme has spread so widely that it has now been appropriated by the Ukrainian opposition to press their case for closer ties with Europe, and even by some Palestinians to highlight challenging living conditions in Gaza.

In the original ad, uploaded to YouTube a month ago and seen more than 58 million times, a very limber Van Damme, now 53, straddles two Volvo trucks as they slowly pull apart. “The Epic Split Feat,” is how it’s described.

Do think Ukraine should split from Russia? Tweet to us!

A Ukrainian director made his own version of the video. In it, the face of beleaguered President Vladimir Yanukovych is superimposed over Van Damme’s and the flags of the European Union and Russia adorn the front of the trucks. The voice-over says: “Ukraine sits between two big monsters: the EU and Russia. But we’re talking about something else, about which step we will take with the EU and with the Russian Customs Union. We’ve decided.” Text then appears on the screen: “They’ve decided! Have you? Kiev, Maidan, Ukraine awaits your decision.”

Maidan refers to the central square in Kiev where protesters, unhappy with the president’s about-face on promised closer ties with Europe, have gathered for mass demonstrations for more than two weeks. U.S. Vice President Joseph Biden was among several leaders and diplomats who called President Yanukovych Monday, concerned the security forces were preparing a larger crackdown on the protesters.

The video has been viewed more than 642,000 times. Among the more than 1,000 comments accompanying it on YouTube, Ukrainians question their future if the country does not extricate itself from Russia. “If Ukraine stays with Russia, Russia will make Ukraine another puppet satellite province [country] with no laws, corruption and no democracy,” writes one man.  Korg1977 writes, “Ukraine lived with Soviets for such a long time as a whore. It’s time to move to Europe.”

The Van Damme imagery has also been used to illustrate the military power of Presidents Putin and Obama in photoshopped images (see above) that were posted as a response by one Ukraine user.

But it’s not just Ukrainians using the ad to make a point. A group of Palestinian comedians posted their version of the commercial to illustrate the lack of services in Gaza, which is governed by the militant group Hamas. In this video, a man stands on the hoods of two cars and declares:

“I’ve been living in Gaza for a long time. And until now, I’ve felt as though I’m alive, but dead at the same time. …The electricity cuts out for 19 hours a day. I go to sleep and wake up, and the electricity still hasn’t come. And the water comes on when the electricity cuts off. …All this doesn’t make Van Damme any better than me, but unfortunately, there’s no gas in this place.” And the camera zooms out to reveal that the cars he’s standing on are being pushed by several men.

Frequent fuel and electricity shortages have long plagued Gaza. Israel tightened border restrictions after Hamas came to power and Egypt recently shut down the tunnels through which supplies were often smuggled, making a bad economic situation in the territory much worse.

Other notable parodies of the Van Damme video include one that’s gotten more than 2 million views and is decidedly less political even though it features a politician. The star: Rob Ford, the crack-smoking Toronto Mayor.