Give Me Your Balding, Your Budget-Minded
By Emily Feldman

Give Me Your Balding, Your Budget-Minded 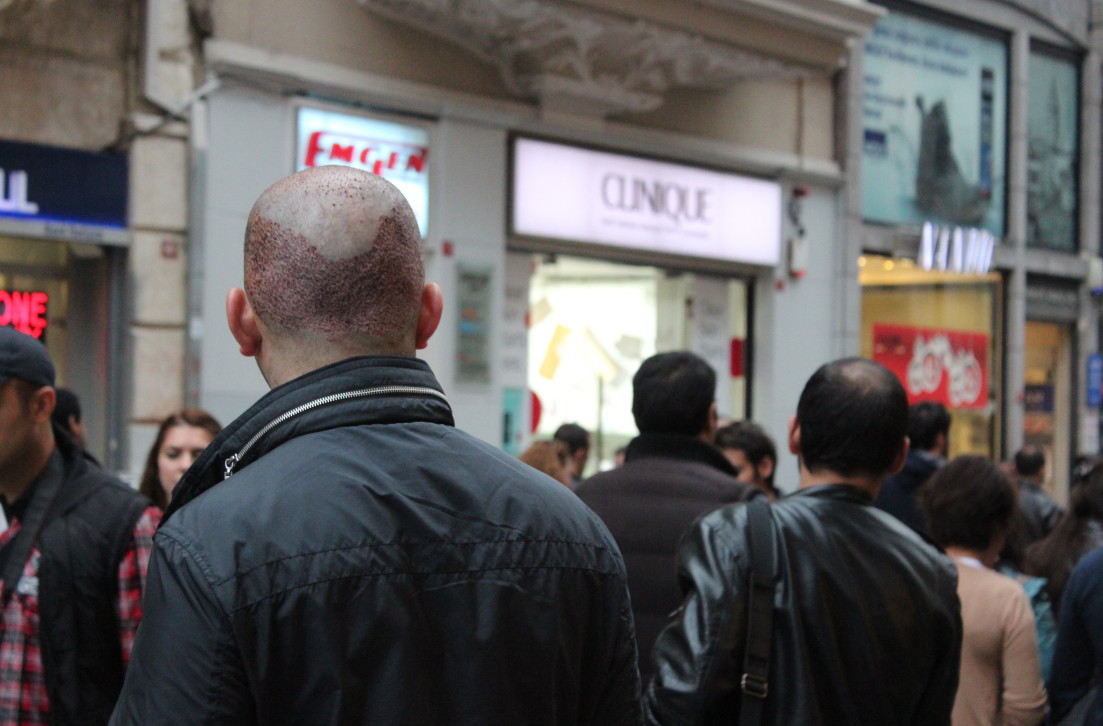 Matthew Wood, a 39-year-old from England, had been going bald for nearly half his life. His hairline began its relentless retreat when he was only 20, and eventually he started trolling the web for solutions. As his 40th birthday approached this year, his search intensified. It led the construction project manager to an upscale hair clinic in Istanbul.

He had never been to Turkey before, but Wood says he knew the country is “a world leader for hair restoration” and an affordable place for surgery. So he shopped online for a doctor, and last month he landed in a consultation room at the NewAge Clinic, a boutique plastic surgery center 1,600 miles from home.

Three Tweets Say It All

Some clinics and medical tourism agencies use social media to attract balding men to Istanbul with promises of fuller hair:

If you have already started showing some bald spots, don't fret. #Affordable_Fue_Hair_Transplant Package in Istanbul https://t.co/DBfvPI7Pwg

For hair transplantation in istanbul NOW at cleveland care Only 1899 Euro including 2 nights accomodation at hotel 5 star and transport.

International hair transplant patients like Wood are remarkably unremarkable in Turkey. The country eagerly promotes itself as a low-cost fountain of youth for the balding men of the world, drawing in foreign customers with an abundance of English-language ads and medical travel websites that make the booking process easy. With a simple click, you can send receding-hairline selfies to a representative in exchange for a quote. And if you like the price, you can speak to someone like Susie Ergun, an American living in Istanbul who works for ISOM, an orthopedic and aesthetic surgery center.

Ergun says some requests come from men in town on business who just want to stop by for a quick hair job. Other customers call asking for a full family vacation, complete with a helicopter ride, a visit to the Grand Bazaar and a day in the operating chair under local anesthesia.

At first the influx of requests shocked Ergun, who previously worked as a physician’s assistant in Southern California. “Even in Orange County, hair transplantation was not really anything that I saw as common,” she says. “And traveling outside the country for that or any medical procedure was not something I had heard about or considered until I came here.”

The number of tourists visiting Turkey to go under the knife in general has increased steadily in the last five years, as the country has ramped up efforts to attract foreign customers. More than 260,000 came for medical treatments last year, generating $1 billion in revenue, according to the Turkish Health Ministry. The government aims to boost that sum to $20 billion by 2023.

The Finance Ministry has even introduced a 50 percent tax exemption for health tourism revenue within the private sector. Perhaps to take advantage of that incentive, one major hospital group recently announced a plan to provide free travel and treatment to an American patient “in exchange for allowing us to document their full experience in a television program.”

Other clinics are taking a more traditional approach to foreign outreach. ISOM, for example, hired Ergun to be the center’s English-speaking tourism guru. She also networks with international healthcare companies and spreads the word about her clinic’s popular procedures, including hair transplants. ISOM’s plastic surgeon performs them on about 25 scalps a month—40 percent of them foreign.

For balding American and European patients, the price is the main selling point. Follicular Unit Extraction (FUE)—a popular hair-restoration technique in which follicles from the back of the head are implanted into balding spots—can cost $10,000 in the United States. In Turkey, Western-trained surgeons can perform the same procedure for $4,000 and have the patient back home in three days.

Josef Woodman, CEO of the medical tourism consumer resource Patients Beyond Borders, says if hospitals really want to attract English speakers in droves, however, they should be more language-friendly. “They’ve got all these JCI sites,” he says, referring to the dozens of hospitals accredited by the prestigious Joint Commission International. “But half aren’t in English.”

Still, many English speakers are willing to overlook this obstacle. In Istanbul’s Taksim Square and popular Cevahir Mall, it’s not unusual to see foreign men with post-op bandages on the back of their head.

The signs of hair-restoration surgery—bandages, black headbands and raw scalps—can be spotted in Taksim Square and the surrounding area. Doctors say the full results can take up to a year to see. (Vocativ/Emily Feldman)

Recently, a Canadian stopped me in the lobby of a sleek building with several medical clinics to ask for directions to the mall and advise me that, if I was heading to the 12th floor for Botox, the doctor would negotiate the price.

Upstairs, Taner Haskan, CEO of the NewAge Clinic, was finalizing appointments for a 36-year-old aircraft engineer from Ireland and a member of Turkey’s Premier Basketball League. Both men were coming in for FUE. His iPhone buzzed at one point when a prospective patient texted photos of his hairline.

Periodically, he checked on Wood, the 39-year-old from England, who eventually emerged from the operating room after an eight-hour hair surgery.

Wood inspected the $5,663 results in a hand mirror. The follicles looked bloody and tender, but he was happy to see little sprouts in place of bald skin. “I think it’s worth it,” he said. “For the confidence.”