Baring your criminal soul, one keystroke at a time: The rise of the internet confession
By Emily Levy

Baring your criminal soul, one keystroke at a time: The rise of the internet confession

Matthew Cordle, 22, took to YouTube last week and uttered four chilling words into the camera: “I killed a man.” The short, slick clip was scripted into a mini documentary about Cordle’s decision to plead guilty to killing 61-year-old Vincent Canzani in a car crash this June while driving under the influence in Columbus, Ohio. He was indicted for his crime on Monday morning, and he turned himself into authorities hours later.

Cordle isn’t the first to use social media as a platform for confession, just the latest and most shocking case. Confessions, once confined to small wooden boxes in churches, are all over YouTube and other social networking sites this summer. And the digital penance-seekers have policy experts and law enforcement agents wondering what to do about their admissions of guilt.

Vocativ monitored Twitter for similar sorts of statements. That’s when we stumbled on James the poet, whose username is @DougsaChongin. He outlines the entire story of a rape he says he committed in a succession of tweets. He has since removed his tweets and taken down his Twitter handle, though his pseudonymous YouTube page appears to still exist. We cannot confirm whether any parts of his story are true, but the details he reveals are at once disturbing and absurd: 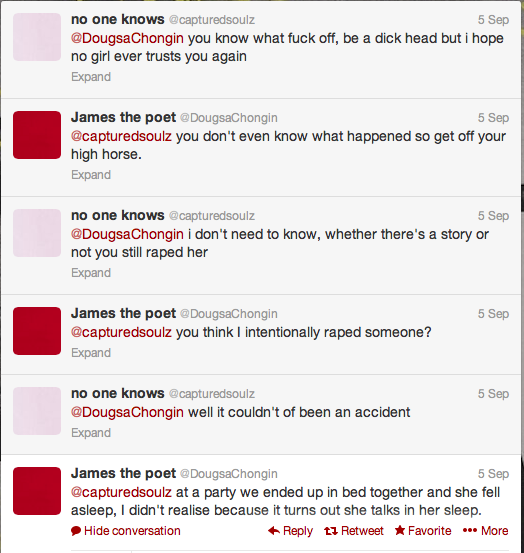 The spate of digital confessions has many analysts wondering whether social media sites that provide blogging (or microblogging) platform should step in. They probably should, especially since there are threads filled with detailed confessions, like this redacted one on Reddit, in which those who previously sexually assaulted or raped others once shared “the other side of the story” (now available here). “People are expecting Facebook and Twitter to control all of this,” says Pamela Rutledge, PhD, director at the Media Psychology Research Center. “At a certain point, we need to start putting the responsibility on the users.”

It’s difficult to determine whether confessions on social media are legitimate, since jokes and casual uses of the words kill and rape (for example, tweets here and here) are all over Twitter and its ilk.

Cordle commissioned his video, which has more than 1 million views, on Aug. 9 through “Because I Said I Would,” a website of that brings promises, revelations and confessions to life on video. The video looks expensive and professional: “Is this even real?” asks Rutledge. “The cinematography is too good.” Cordle’s lawyers say the video is real and that they will use it to help Cordle in his upcoming trial.

Facebook and Reddit have recently cracked down on posts related to sexual violence. In May, Facebook shut down a number of pages, including “Fly Kicking Sluts in the Uterus,” “Kicking Your Girlfriend in the Fanny Because She Won’t Make You a Sandwich” and “Violently Raping Your Friend Just for Laughs,” after being prompted by an open letter from WAM! (Women, Action & the Media), an organization based in Cambridge, Massachusetts, that fights for gender equality in the media. And in June, Reddit outlined how people should post their confessions safely on the site. “Be careful about posting personal information,” the Reddit team wrote in a letter to the Reddit community. The team warned those using their site for confessions against using their regular Reddit usernames and posting proof related to their confessions.

But there are sites designed specifically for deep, dark secrets. PostSecret and Reddit’s confession channels, r/confession and r/offmychest, allow users to post secrets anonymously, and serve as havens for all sorts of twisted secrets. Facebook and Twitter do the trick too—without the same sort of anonymity.

Americans are taking advantage of these features. In August, a 31-year-old man from Florida confessed to killing his wife via a Facebook post that included pictures of her bloody body and the following comment: “I’m going to prison or death sentence for killing my wife love you guys miss you guys take care Facebook people you will see me in the news.” And on PostSecret, one user posted a screenshot of a map with a handmade sign that reads, “She dumped me, but I dumped her [body],” with an arrow pointing to a spot on the map. Reddit users soon pinpointed the spot as Jackson Park in Chicago. Police officers subsequently searched the park but did not find a body, leading them to believe that the confession was a fake.

Back in July, a Reddit user named Pilot94 and his friends were caught by the police after having sex with three underage girls in Tennessee. Pilot94 describes his take on the incident, which he claims was not a case of statutory rape, in a post on Reddit’s r/offmychest channel. “Shit hit the fan,” he writes in the post. “The girls accused us of raping them, getting them drunk and supplying drugs.” The user explains that detectives and policemen were meant to investigate the case, but were fired shortly after the charge, and the case “just disappeared.” Reddit users subsequently alerted the man’s university to what he had done, sparking even more controversy on Reddit.

It actually makes sense that people in their 20s and 30s use social media as an avenue for confession, since they already share everything else about their lives online. “For many people, writing a note would be strange,” Rutledge explains.

As for what happens after a post is online, some police stations monitor Facebook and Twitter closely as a means of finding the perpetrators behind a given crime. “The police like social media,” Rutledge says. And while she explains that networking and blogging sites are very helpful resources for law enforcement agents, how and how often they choose to use the various sites is different from outpost to outpost. “It depends on resources and skill set,” she says.

According to a poll by LexisNexis from July 2012, nearly 70 percent of law enforcement agents think that social media is a helpful tool in aiding investigations. More than 80 percent of federal law enforcement agencies use social media as a resource. A public information representative in New York’s police system said she could not comment on “investigative techniques, procedures or enforcement” for security reasons.

When asked how Reddit responds to confessions that might have legal repercussions, Reddit Director of Communications Victoria Taylor pointed us to the site’s privacy policy, which indicates that the site won’t hand over personal information unless required to do so. “We may disclose—or preserve for future disclosure—your information if we believe, after due consideration, that doing so is reasonably necessary to comply with a law, regulation, or valid legal process,” the policy reads. Twitter has a special set of instructions for law enforcement agents so agents know how and when they can request personal information from Twitter.

Of course, finding the posts on social media is only one piece of the puzzle. “Taking responsibility for your actions—it’s not often that you see that in a video,” says one policeman in Columbus, Ohio, who works in the same office involved in the Cordle case. But the content of the post is just as important as the discovery, and enforcement experts say all posts require independently verifiable sources for context.

Soon police officers across the country will have a social networking site of their own to share finds and collectively keep tabs on trends. The site, which launches this fall, will be called BlueLine.