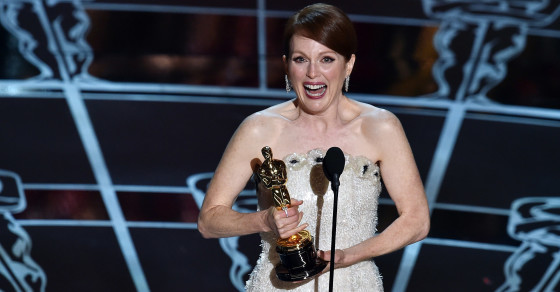 And The Most Thanked Person In Oscar History Is…

In advance of the 87th Academy Awards on Sunday, Vocativ mined all 1,396 acceptance speeches archived on the Academy’s website to find out which members of Hollywood’s power elite can lay claim to the ultimate in Oscar bragging rights: most likely to be name-dropped.

“The Academy” gets respect in 43 percent of all speeches, and Mom and Dad are recognized 28 percent of the time. But which individuals have received the most golden shout-outs?

High up at the top of the list is director-cum-mogul Steven Spielberg, who has been thanked an outrageous 42 times from the Oscar podium, not only by people who starred in his movies, like Daniel Day-Lewis (Lincoln), but also by those who were simply inspired by him, such as Sam Mendes (American Beauty).

Ranked second, with 25 percent fewer nods than Spielberg, is former Miramax and current Weinstein Company head Harvey Weinstein. He produced a best picture winner with Shakespeare in Love and several films that featured Oscar-winning performances, including Inglourious Basterds, The King’s Speech and Chicago. When you thank Harvey, everyone knows who you’re talking about.

Occupying the next three spots are men known primarily as directors who have cumulatively produced more than 120 films. James Cameron comes in third with 28 thank-yous, mostly from those who worked behind the scenes on Titanic, The Terminator and Avatar. George Lucas follows with 23, and Peter Jackson clocks in with a respectable 22 from the many people who won Oscars for their work on the Lord of the Rings trilogy.

Sixth on the list is God, who’s never produced, directed or acted in a film, unless you think he was working through Morgan Freeman in Evan Almighty.

Right behind him at seven is Fran Walsh, the first woman to crack our top 10. Walsh wrote the screenplays for all the LOTR and Hobbit movies and is a three-time Oscar winner herself. She’s also married to Jackson, the man two spots ahead of her on our list. Sheila Nevins, president of HBO Documentary Films and the only other woman to make the list, is right behind Walsh with 16 thank-yous, though she’s worked on films that have won 21 Oscars, which makes one wonder who the five a-holes are.

The final four slots on the list include two legendary directors, Francis Ford Coppola (tied for ninth with 16) and Martin Scorsese (tied for 10th with 15), who have 12 best director Oscar nominations between them. Tied for ninth with Coppola is producer Barrie Osborne, thanked largely for his work on the LOTR trilogy and The Matrix. The last man on our list is Saul Zaentz, who’s tied with Scorsese. Zaentz produced only nine films in his 31-year Hollywood career, but three of them (One Flew Over the Cuckoo’s Nest, Amadeus and The English Patient) won best picture. He died in January 2014 and is the only non-living member of the honor roll.

UPDATE: Both God and HBO’s Sheila Nevins received thanks from the podium last night, bringing God’s  total to 20, which is still not enough catch up to almighty Peter Jackson’s 22 in fifth place. With 18 thanks, Nevins now ties with Fran Walsh for 7th place in the all-time rankings, just under God.