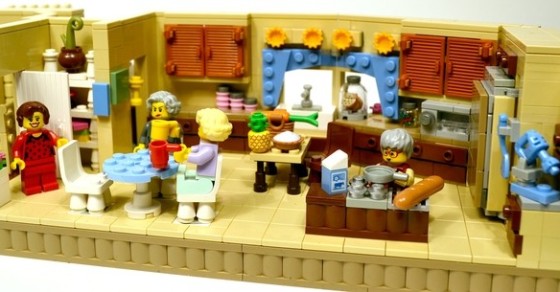 Meet The Guy Behind The Golden Girls Lego Set

When we first reported it on Tuesday, Samuel Hatmaker’s The Golden Girls Lego set had a few hundred supporters on Lego’s Ideas website. Just 28 hours later, the 40-year-old toy developer had received the 10,000 votes he needed for Lego to consider his submission for production into official merchandise.

“I am totally in awe,” he tells Vocativ of his project’s popularity. “I can’t believe how fast and furious the fans are.”

A longtime Golden Girls fan, Hatmaker’s set began as a winter project to keep him busy while his native New York got pummeled with snow. He started working on the living room, then the kitchen — which took him 20 attempts to get right — and it took off from there. He had to order around $200 of extra pieces to recreate specific set items from the 1980’s hit show, but he already had most of the Lego needed to get going.

More The Golden Girls Lego Set Might Soon Be Reality

Hatmaker has made two Avatar sets—including one he submitted to Lego Ideas—as well as some The Walking Dead and Game of Thrones figures he’s gifted to friends. Though nothing has been as popular as his set of sassy seniors.

“It’s a timeless show,” he adds. “I watched it [The Golden Girls] as a child and thought it was funny. Many of the jokes went over my head. I watch it now, and it is still brilliant.”

Now that the project’s reached the number required to bring it one step closer to reality—we reached out to Lego and are awaiting official comment, but it’s been nominated as a Staff Pick—Hatmaker has even bigger ideas for the future.

“I will give them my resume and try to work there—it would be a dream job,” he says. “They need someone like me in charge of their adult collector line. I have a lot of ideas.”

Samuel Hatmaker, the creator of The Golden Girls Lego set.