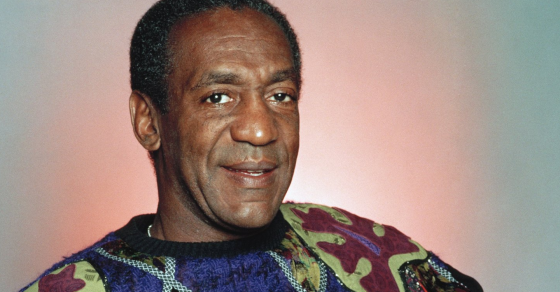 Watch this video (below) of Bill Cosby interviewing Sofia Vergara and try not to feel at least mildly creeped out, knowing what you now know. Next imagine how you might have felt viewing it in 2003 and you’ll likely still feel a bit repulsed, but probably more at yourself than anything.

At one point, Bill Cosby was TV’s favorite fuddy-duddy, enjoying the protection of a clean-as-a-whistle reputation and the insulation of his age. He could, arguably, flirt amicably with younger women and it would be seen as that’ll-never-happen cheeky old man jocularity, rendered harmless by a sexlessness afforded to him by his seniority and role as America’s Dad.

Not today. Rape allegations against Cosby, which first surfaced almost a decade ago (not long after this clip aired, in fact), have reappeared and been amplified in recent weeks, to the point that Cosby is being tried afresh in the court of public opinion. Whether they are proven or not, the growing batch of accusations now cast much of what he’s done since in a darker light.

Take this interview with Sofia Vergara, shot in 2003 on David Letterman’s Late Show set, for example. (Cosby, ironically, recently pulled a planned Letterman appearance because of the allegations.) Sofia was appearing on the show in her pre-Modern Family days, before she became a household name, no matter what language you spoke. (Modern Family premiered in 2009.) Cosby, for reasons not disclosed, is sitting in a guest’s chair. Vergara emerges and Cosby conducts a slapdash interview.

More or less immediately, Vergara and Cosby begin to talk about her dress, and Vergara explains how she intended to wear a different, less revealing dress, but that she got lipstick on it in the dressing room. This opens the door for Cosby to discuss the process of Vergara putting on the figure-hugging number she is wearing.

Bear in mind that Vergara, a relative unknown, admits that this appearance is a really big deal for her, and could make or break her career. Cosby, at this point in time, is vastly more famous than she is—he doesn’t even know what TV channel she appears on. Although Vergara seems clearly uncomfortable at times during the conversation, she knows that she pretty much has to laugh it off, as she’s sitting next to a national treasure. To insult him, or chastise him, would likely be career suicide.

3.02 “That’s what happens when you pull [the dress] over your head and it’s too tight, and then you pull it down here, and it’s still too tight—men look at you and they think only of sin.”

Vergara then jokingly begs Cosby not to die from all the excitement, but recants, saying that maybe if he died on television, it would make her more famous.

Cosby: “Not for the interview [interruption]—he died because of what he was thinking.”

The audience laughs and forgives Cosby for each of his transgressions, he duly runs out of steam, and the interview largely becomes a banal piece of chit-chat. It’s not the first Cosby nugget to be dredged up from the YouTube archives, squinted at and recontextualized—and you can be sure it won’t be the last.

h/t to Mike Spies for finding the video.