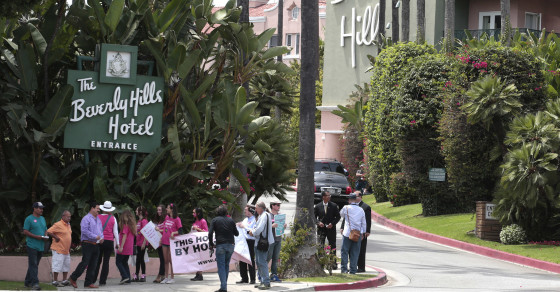 It’s Celebrity Against Celebrity at the Beverly Hills Hotel 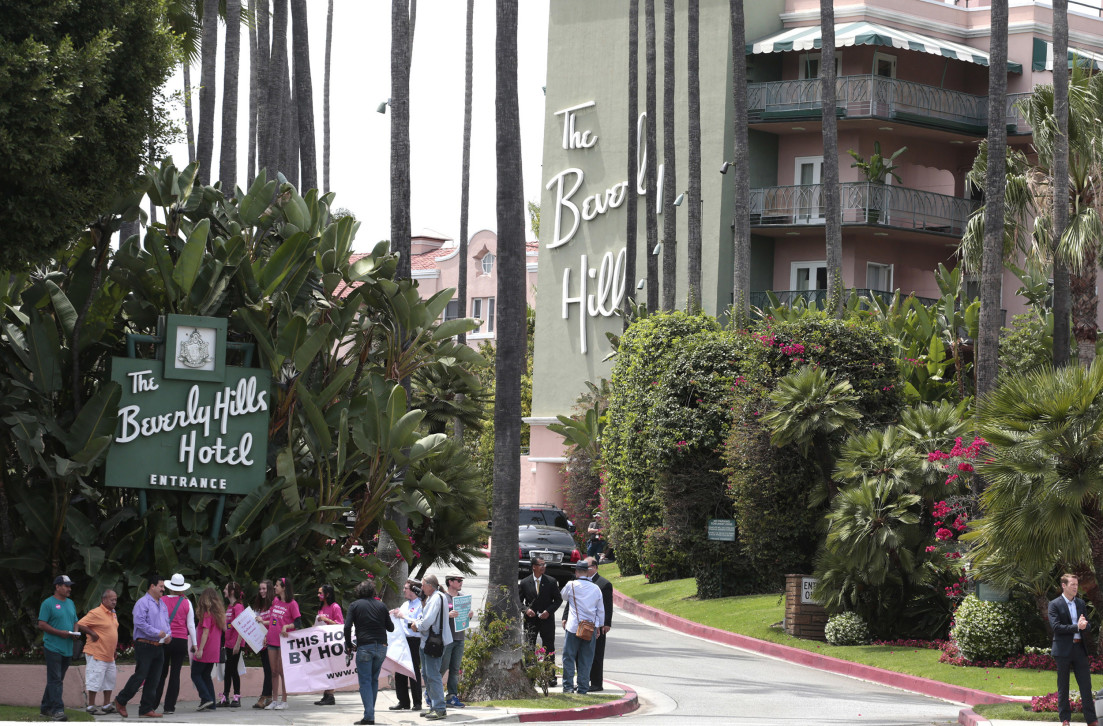 The Gladiator is coming out swinging.

Russell Crowe popped out a string of tweets yesterday offering his support for workers at the Dorchester luxury hotel chain. Normally that wouldn’t be a big deal—it might even be applauded. But this time, he’s getting some blowback. A number of A-list actors have been calling for a boycott of the chain, the Dorchester Collection, because its owner, the Sultan of Brunei, recently announced harsh penalties for gays and adulterers, including death by stoning.

So it’s Crowe vs, Jay Leno, Kim Kardashian, Ellen Degeneres and other celebs in the battle over how best to shame the Sultan, who owns 10 swish hotels in the U.S., U.K., France, Italy and Switzerland.

#2 however, throwing the staff of Dorchester Collection Hotels under the bus to make a political point is not acceptable to me.

In his burst of tweets, Crowe made the point that the concierges, bellhops and cleaning staff at the storied hotels—Queen Elizabeth attended a dinner party at Dorchester in London the day before her engagement in 1947—shouldn’t have to suffer just because the owner is a bigot. “These are hard-working people with families and I guarantee you they come from all walks of life. …To me, it is not acceptable collateral damage to ignore them,” he wrote. Apparently, Crowe is a regular at the Dorchester hotels, and he is friendly with the staff there.

Meanwhile, Degeneres, Leno, Richard Branson and members of a slew of U.S.-based gay rights groups canceled reservations for events they were planning to hold at the hotels, and some of them even grabbed a bullhorn and marched outside of the venues. GLAAD and Human Rights Campaign have both called for action on their websites. Others on their Facebook pages suggested a boycott of Brunei’s flagship airlines and even the entire country. (Separately, an Islamist-oriented Facebook page has called for a boycott of Richard Branson because of his boycott of Brunei.)

Jay Leno at a gathering of Women's Rights and LGBT groups protesting across from the Beverly Hills Hotel, which is owned by the Sultan of Brunei.

What sparked the controversy is the Sultan of Brunei’s decision to make Sharia law, which includes chopping off people’s limbs or flogging them for some crimes, the country’s primary legal system in April. Gay rights activists have since seized on provisions within Brunei’s penal code calling for the stoning of homosexuals and demanded a boycott of the Sultan’s Dorchester Collection.

As BuzzFeed reported last week, there is more to this situation there is more nuanced that people think, and aggressive protesting may not be the best way to help LGBT people in Brunei. Julie Dorf of the Council for Global Equality noted when speaking to BuzzFeed: “What I know from working in that region and knowing activists for many years is that going public with demonstrations and big, loud activism without any connection to people on the ground who are fighting this fight is dangerous…first and foremost dangerous to the people there who may be subject to a very dangerous backlash and dangerous for your credibility as an activist.” Dorf also said the country’s new sodomy laws might be more lenient than before, given the fact that you now need four male witnesses to make a conviction.