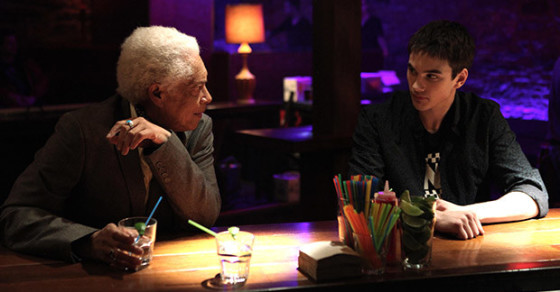 A New Film Wants You to Respect Your Elders, Sexually
By Luke Malone

A New Film Wants You to Respect Your Elders, Sexually 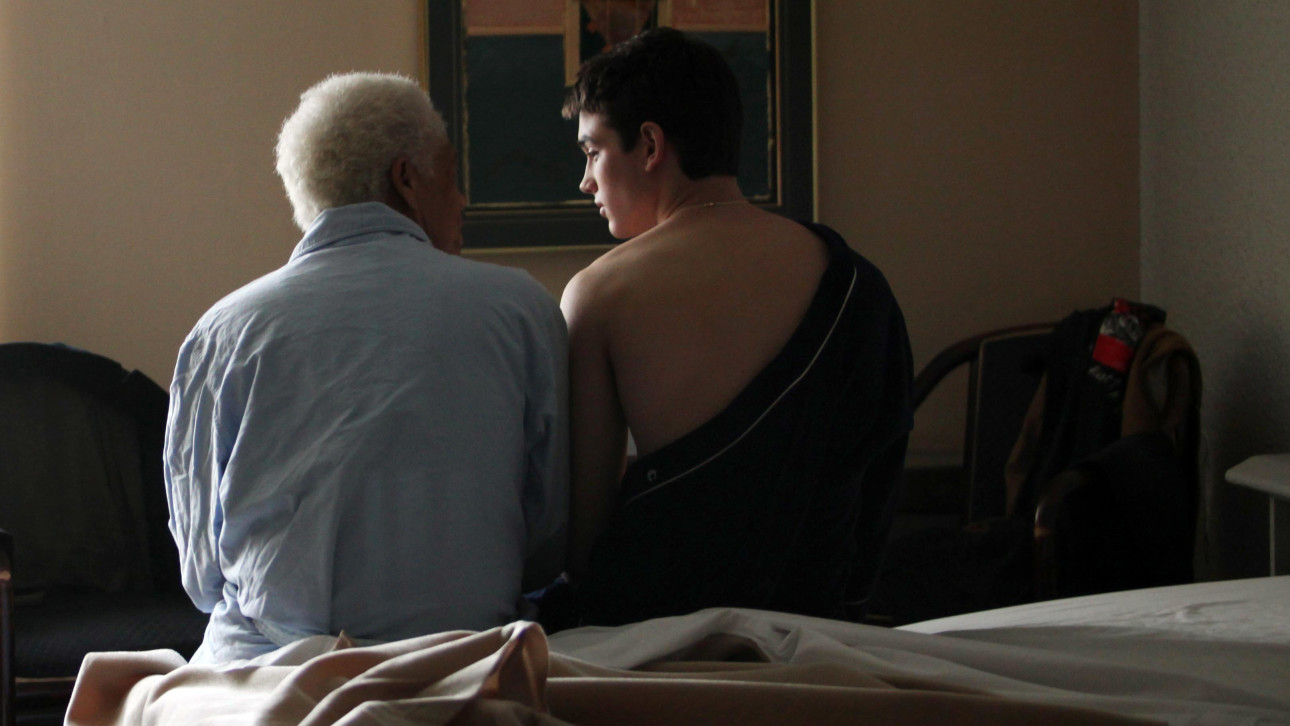 Known for his earlier underground efforts, including the politically charged No Skin Off My Ass and dark sex comedy Hustler White, director Bruce LaBruce is testing tamer waters. His new film, Gerontophilia—a decidedly offbeat romantic comedy—follows 18-year-old Lake, who takes a job at a nursing home shortly after discovering his attraction to older men. Once there, Lake falls for 81-year-old resident Mr. Peabody and busts him out upon learning the facility is deliberately overmedicating its occupants. Together they embark on a road trip across Canada.

Lacking the explicitness found in his other films, Gerontophilia marks LaBruce’s first effort to bring his work to a broader audience. It’s also why he received a budget of $2 million—his largest to date.

LaBruce, who was recently announced jury president for the Queer Palm Award at the upcoming Cannes Film Festival, says he was inspired in part by his friend Marcus Ewert, the teenage lover of Allen Ginsberg and William Burroughs. He discusses this, his own boyhood crushes and the agelessness of sexuality in an exclusive interview with Vocativ.

Tell me a little bit about gerontophilia.

The older and more wrinkled and closer to death the object of desire is, the more sexually stimulated the gerontophile. It also has to do with empathy for the aged, and an appreciation for their wisdom and experience. It’s a love of the elderly, as well as a sexual attraction. Most fetishes entail a love and respect for the object of desire, not merely a sexual attraction to it. But most people choose not to understand or believe that a fetish also has a romantic impulse.

What is it about it that interests you?

I am now middle-aged, and I hope I will run into gerontophiles in the near or distant future who will appreciate me as a sexy, stimulating and fascinating sexual object. It’s also a good metaphor for any sort of taboo or transgressive sexual peccadillo, a celebration of anyone who goes against the grain of society or nature. Young is fun, but old is bold.

So it’s something you’re thinking of more now that you’re 50?

Well, duh, yeah. I mean your sexual drive doesn’t really diminish that much, although the dominant culture would prefer if the sexuality of people of a certain age would disappear. Everything is geared toward the cult of youth in the new Western capitalist paradigm, and old people are only supposed to be pathetic geezers who have some kind of grotesque desire for young people. But what would happen if, in a topsy-turvy world, old people actually were afforded some sexual commerce? It may go against the culture and nature, but in a more interesting world, that might be considered revolutionary and cool.

Pier-Gabriel Lajoie and Walter Borden
(Bruce LaBruce)
Is this why sex with older people is considered a fetish, as opposed to just, you know, sex?

How did you go about researching the topic?

My research was mostly based on personal experience and people I have met who have had gerontophile experiences or tendencies. After I hit puberty, I had very strong sexual fantasies about older men, ranging from male teachers in their 30s or 40s to even older men in my life. Our contemporary Western culture doesn’t even want to acknowledge that postpubescent children can have these kinds of sexual impulses. Age of consent laws vary worldwide, but it is obviously often a gray area in terms of morality and ethical behavior. With my movie, I chose to represent an inter-generational love and sex relationship that is as extreme as possible and still within legal boundaries. But it still disturbs people in its extremity, if in a deceptively gentle and subtle way.

You were the one who told me me about Marcus Ewert. How was he an influence?

I knew Mark from his fanzines and then I met him and became friends with him in San Francisco. I was always fascinated by his romantic and sexual relationships with Allen Ginsberg and William Burroughs when he was 17 and they were senior citizens. I liked the notion that, in a way, he had sacrificed himself on the altar of these great artists by offering his body and soul to them. But beyond that, I was sure he also found them sexually stimulating because of their wisdom and stature, and also because he felt an empathy for someone in that stage of their life who might not have easy access to the sexual vigor of the youthful and the beautiful.

Lajoie and Walter Borden in a scene from the film.
(Bruce LaBruce)
Tell me about the casting process. How did you go about finding your two protagonists?

In my script for Gerontophilia, the characters, as written, were 18 and 81, so I really wanted to cast actors pretty much the same age as the characters in order to give the movie a super-gerontophile effect. I cast both actors, 18-year-old Pier-Gabriel Lajoie, who is straight, and 81-year-old Walter Borden, who is gay, through casting agents. PG had a very innocent and sweet and tender quality, which was consistent with his character of Lake. He is also very beautiful, which adds a nice irony to his gerontophilia—he is the ultimate object of desire in a society which overvalues youth and beauty, and yet his sexual choice is for the elderly, who are not considered sexually attractive. Walter is also a very handsome, charismatic man, and I think he’s sexy. He proves that elders can be sexy.

What was the chemistry like between them on set?

The whole believability of the movie depended on the chemistry between the two actors, and it was a real risk to think that this could be accomplished. But after a few days of shooting, I realized that my instincts were correct, even though they were exact opposites in almost all respects: PG is straight, white, French-Canadian and young; Walter is gay, black, English-Canadian and old.

How did the rest of the shoot go?

Gerontophilia was my biggest budget film to date, my first union picture, and a film shot in a very controlled, very prepared, industry style, which was part of the reason I wanted to make it—to try something completely different from my usual style of underground, guerrilla filmmaking. But there were still a few great accidental miracles, like the day we shot the old man’s funeral happened to be a day with uninterrupted snowfall. We weren’t supposed to shoot it that day—it was switched at the last moment—and it added a real pathos to the scenes.

Borden and Lajoie on the lamb.
(Sébastien Raymond)
People are remarking on how tame this seems in comparison to some of your more explicit films, and it is positioned as an offbeat rom-com. Was this deliberate?

Absolutely. I wanted to try something totally unexpected for me. People often want to put you in a box and expect you to give them the same thing every time. I wanted to make a film that was shocking by not being shocking. It’s also very trendy now to make sexually explicit films, but I’ve been doing it since the late 80s. For me, making a film that isn’t pornographic is going against the grain.

Do you see this film as your bridge between the underground and the mainstream?

Not really. I already have another new film, Pierrot Lunaire—an experimental film based on a stage adaption of Arnold Schoenberg’s Pierrot Lunaire that I directed in Berlin several years ago. It is anti-narrative, low-budget and sexually explicit. Ideally, I would like to continue to make both more mainstream films and more crazy underground films.

You’re considered a bit of a provocateur. Is that your intention?

As a former punk, in some ways I don’t see the point of making art that doesn’t provoke. But as I said, sometimes you can provoke people in unexpected ways. In a way, the fact that I made Gerontophilia, a more mainstream and somewhat conventionally romantic film, was for me another kind of provocation.

It’s been getting a lot of good press in Europe, but how do you think the film will be received in the U.S., a country with a comparatively fraught relationship with sex?

I have already, of course, been slaughtered by Variety, which complained after Gerontophilia debuted at the Venice Film Festival to a standing ovation and much buzz that I had gone “soft” and “limp” by trying to go mainstream. This is rich, considering that Variety has never given me a good review because they always complain that my films are too pornographic and underground. But in my circles, a bad review in Variety is a badge of honor. Gerontophilia has just opened in France to almost uniformly rave reviews, and it has also done very well at the box office. I don’t necessarily expect the same from U.S. critics.