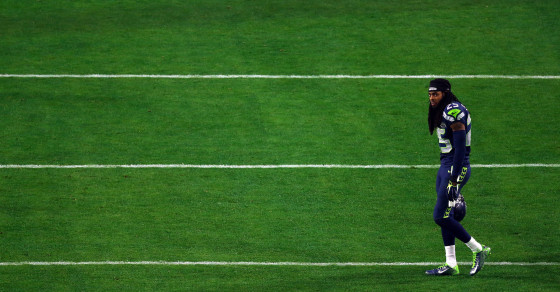 Patriots Vs. Seahawks: Which Super Bowl Team Has The Most Arrests?
By Sarah Kaufman

Patriots Vs. Seahawks: Which Super Bowl Team Has The Most Arrests?

The Seahawks didn’t just lose during last night’s Super Bowl, they lost in the courts as well. We used data from USA Today to find out that the Seahawks have been in more trouble with the law than their victorious counterparts, the Patriots, over the years.

Doesn’t look good, Hawks fans. Six Seattle players were arrested during the last two seasons, while only two Pats found the back of the cop car in the 2012–2013 season, and none during this past NFL campaign. However, the Patriots’ arrests have been on the serious side. For example, former tight end Aaron Hernandez was charged in 2013 with first-degree murder in the death of his friend, along with five gun charges.

The Seahawks players were also arrested during that period, and they’ve been hauled in for minor misdeeds as well. In 2012, offensive guard John Moffitt was arrested for disorderly conduct. USA Today notes: “Banned from a mall in Bellevue, Wash., in January 2012, he later was accused of trespassing there, obstructing police and public urination.”

Compared to the rest of the league, Seattle and New England aren’t exactly outliers, but they fall on two ends of the spectrum:

Of the 253 total arrests in the NFL this season, Seahawks players accounted for 11 of them, falling short of the Minnesota Vikings’ league-leading 18. While the four Pats arrested is low for an NFL team, they can’t touch the Houston Texans, who’ve managed not to score a single arrest in five seasons. If there was a Super Bowl for a team’s players keeping their noses clean, the Texans would take it.

With Ray Rice and other players’ extracurricular activities dominating the news recently, it might seem that arrests are skyrocketing. In actuality, it’s been a fairly typical year for America’s biggest sport.

NFL Player Arrests In The Past Five Years | Create infographics

Although arrests during the 2013–2014 season did spike, the current season seems to have returned to the previous standard. History shows that in any given NFL season you can expect about 50 players to be arrested for anything from running out on a $27 restaurant tab (Seattle’s Raheem Brock) to trying to enter a nightclub that was already at capacity (New England’s Bret Lockett). Fifty arrests may seem like a lot, but that’s because you haven’t been paying attention to the NBA.