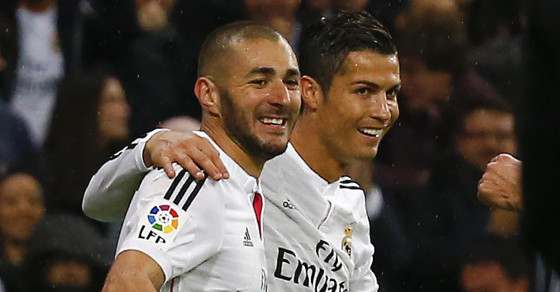 The Shape of a Soccer Player’s Face Can Predict Performance

Soccer recruiters, take note. According to a new study, if you want to find guys who’ll score early and often, just take a look at the shape of their face.

After examining the stats for 1,000 different players from 32 countries who competed in the 2010 World Cup, researchers at the University of Colorado Boulder found that those with higher facial width-to-height ratios were more likely to score goals and make assists, as well as commit fouls.

Other studies have associated higher ratios with increased aggression, both in the positive and negative sense. For instance, a rounder face has been linked to antisocial behavior, such as a propensity to cheat, as well as success among CEOs and drive for achievement among U.S. presidents. So in this case, higher aggression would ostensibly lead to better on-field performances.

Facial width-to-height ratios are determined by dividing the distance between the cheekbones by the distance between mid-brow and upper lip. People with a narrower face will have a ratio of about 1.6, while people with a wider face would be expected to have a ratio of 2 or higher. (In case you’re curious, in the 2012 study of 29 past commanders-in-chief, Herbert Hoover came out on top with a ratio of 2.3, while Woodrow Wilson landed at the bottom of the pack with a ratio of 1.78.)

Past studies had looked mainly at hockey players, so Keith Welker, a postdoctoral researcher in CU-Boulder Department of Psychology and Neuroscience, was curious if the effect carried over into other sports. Welker decided to look at World Cup players because they offer a good cross section of facial shapes and athletic abilities from men around the globe.

“Previous research into facial structure of athletes has been primarily in the United States and Canada,” says Welker, the lead author of the paper. “No one had really looked at how facial width-to-height ratio is associated with athletic performance by comparing people from across the world.”

So far the link between face shape and aggression has been found only in men, and scientists believe that this can be explained by testosterone exposure early in adolescent development. Apart from increasing aggression, the hormone has also been shown to affect a variety of traits during male puberty, including everything from bone density to cranial shape.

In other words, it looks like some men are born with a game face, while other athletes may just have to work a little harder to score.