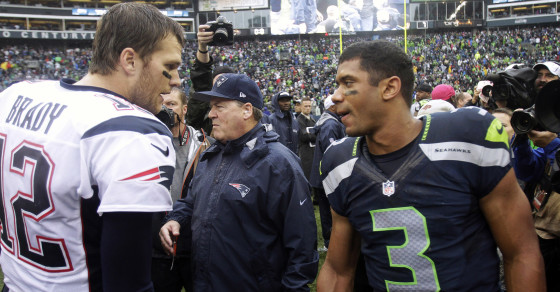 Tom Brady Doesn’t Like As Many People As Russell Wilson

There’s an almost endless set of stats you can use to compare the two quarterbacks squaring off against each other in Sunday’s Super Bowl XLIX, Tom Brady of the New England Patriots and Russell Wilson of the Seattle Seahawks. Who’s got the better QB rating? Who’s got the bigger contract? Who wears more designer clothing? Take your pick. Here’s just one more to consider.

Currently, Wilson has 1,592,593 followers on his official Facebook page and has liked 142 people, places or things, including Rihanna and Donald Trump.

Brady, on the other hand, has 2,959,820 followers, but has liked only seven pages, including his wife, supermodel Gisele Bündchen, and New York Times columnist Thomas Friedman. Unlike Wilson, Brady isn’t following any of the products he endorses, his team, the university he graduated from or any of his teammates.

The quarterbacks do have two likes in common—Jay-Z and the NFL.