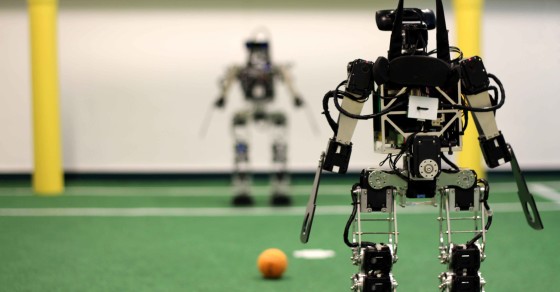 Could Robots Someday Win the World Cup?
By Joel Stonington 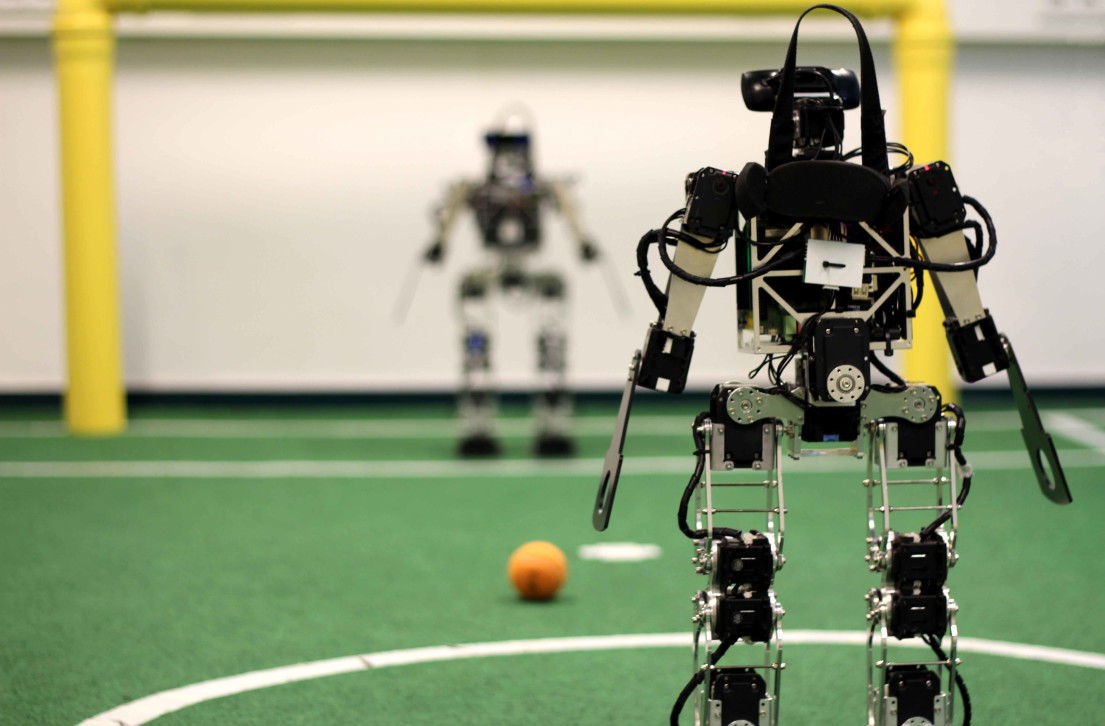 For Steffen Puhlmann, the question isn’t if a team of robots will come to dominate the soccer world, but when. But as this summer’s World Cup approaches, the 25-year-old master’s student in Berlin is focused on a different sort of game—one played entirely between machines.

Puhlmann works on one of his creations.

More than 15 years ago, a group of Japanese scientists created what’s known as the RoboCup, a soccer world championship for robots. Since then, the robot designers involved have made it their goal to beat the best human team in the world by 2050.

Last week, I met with Puhlmann and other researchers at Freie Universität in Berlin to get a better sense of how these soccer-playing robots work. While robotics experts from all over the world are involved in the RoboCup, this large research university in Berlin has emerged as a, well, leader on the field. Puhlmann and his colleagues won’t be attending this year’s event, which like the World Cup, is being held in Brazil. But they are hard at work, trying to perfect the way robots play soccer.

The lab where Puhlmann works is a cross between a coach’s office and a messy garage. Half the room is filled with desks covered with shiny robot parts, computers and empty bottles of energy drinks. The other side looks like a mini indoor soccer field, complete with turf, goals, small orange soccer balls and shelves of trophies.

The robot team at rest.

There are many divisions in the RoboCup, which are based on the size of the machines. (Puhlmann’s robots, for instance, are about as big as a toddler.) The rules, however, are uniform. To qualify for competition, these ball-dribbling Johnny Five’s need to have human-like characteristics such as arms and legs. Researchers make them from scratch and can only communicate with them through speech—like in a real soccer game. The robots also can’t have any special advantages like radar or lasers. “So no integrated weapons,” jokes Lutz Freitag, a 26-year-old master’s student who also works in the lab.

Since the first RoboCup in 1997, the robots have improved, and the competition has led to technological breakthroughs that transcend the sport. For example, researchers at Virginia Tech and the University of Pennsylvania are developing a firefighting robot based on one originally intended to play soccer.

Yet the research still has a long way to go. The robots function on sensors that react to light, temperature and pressure. The computer inside the robot then must decide how to act. From what I saw, these robots aren’t exactly Terminators; they struggle to walk, fall over at the slightest touch, kick worse than most middle schoolers and seem to lose track of where they are on the field. They’re not exactly a threat to the Lionel Messi’s of the world.

But that’s what’s fascinating about the challenge: The easiest things for humans are often the most difficult for robots. “Most of what we’re doing here is math,” says Freitag. “From the perspective of a computer, an image is just a table of numbers. The computer doesn’t know how the ball will move by intuition.”

During downtime, the researchers sometimes play around with the robots, just to see what they can do. During the few hours I spent at the lab, the students showed me how to control one of the bots with Xbox controller. When I pressed the Y button, the robot did the chicken dance.

Up next? Perhaps some of these elaborate goal celebrations.