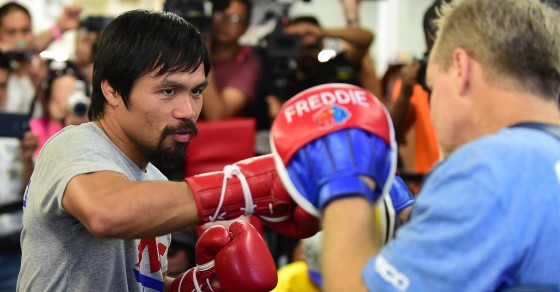 Pacquiao Gets $2.25 Million Just For Putting On His Trunks Next Week
By Abigail Tracy

Pacquiao Gets $2.25 Million Just For Putting On His Trunks Next Week

It would be pretty nice to get paid millions of dollars just for throwing on a pair of shorts. That’s Manny Pacquiao life. The boxer stands to get $2.25 million for wearing boxing trunks with company logos on them. He does have to fight Floyd Mayweather Jr. to get that cash, but those extra millions are on top of the staggering, guaranteed $80 million he will get for fighting the five-time division world champion (paltry compared to the $120 million payout for Mayweather) in Vegas.

So far, six companies have already booked spots on Pacquiao’s shorts for the much-anticipated May 2 fight. His adviser said that Nike, Cafe Puro and Air Asia will be among those featured, reported ESPN. Mayweather’s shorts are also apparently up for grabs, and FanDuel, a fantasy sports company, already landed rights to have its name on the belt of the undefeated boxer’s shorts.