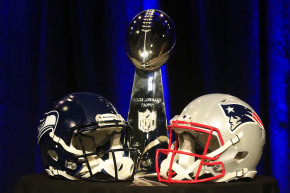 When TMZ Sports released footage last week showing Baltimore Ravens running back Ray Rice hitting and knocking unconscious his now wife, Janay Palmer, in an Atlantic City casino elevator, it not only started a shitstorm of controversy for the NFL, but it also raised a lot of questions.

Hundreds of women took to social media to share stories and shed light on domestic abuse with the hashtags #WhyIStayed and #WhyILeft. Media and insiders questioned whether the NFL and Commissioner Roger Goodell had seen the video, given Rice’s laughable two-day suspension for the incident in question. The commission revisited Rice’s punishment and made the decision to suspend the running back indefinitely, but it made us wonder how often Goodell and Co. are being forced to mete out punishment for players who violate the league’s conduct rules.

Read: Just how often are NFL players getting arrested?

Of course, it’s important to note that domestic abuse cases and player misconduct are not limited to the NFL. Every professional sport has its villains. (Somewhere Javaris Crittenton is praying he missed the footage-as-evidence trend.) We were curious as to how the NFL stacks up against other professional sports in terms of arrest rates.

The numbers are enlightening.

To start, we took the number of reported arrests for players in each of the four biggest professional leagues (NFL, NBA, MLB and NHL) from January 2010 until the beginning of September 2014. To get yearly rates for each league, we then divided each year’s arrests by the number of players and multiplied by 100,000 to account for variance (a standard in crime stats). The average per league is across all five years.

What we found—and if you’re following headlines (say it ain’t so, AP), it’s not going to come as a surprise—is that the NBA and NFL lead arrest rates compared with the MLB and NHL. From 2010 to present, the NFL had an average arrest rate (for a population of 100,000) of approximately 2,466, followed by the NBA’s 2,157. Comparatively, professional baseball and hockey players clocked average arrest rates of 553 and 175, respectively, over the same period.

The number and nature of arrests are based on data from the sports arrest databases Arrest Nation, the NFL Arrests Database and the NBA Crime Library.

The number of domestic abuse incidents on a yearly basis were comparable between the NBA and the NFL. But when we adjusted the numbers to take into account the size differential of the two leagues, professional basketball players have a higher arrest rate for domestic abuse/assault-related arrests (this includes any assaults that took place within the home and assaults of girlfriends/wives) since 2010.

Sadly, every league had at least one domestic abuse incident since 2010, though both the MLB and NHL had years without any such arrests.

It’s also important to note that the NFL and NBA had a wide range of alleged crimes associated with their arrests, compared with the MLB, where arrests for driving under the influence were dominant. And the NHL? Well, Patrick Kane hasn’t punched any cab drivers this year.