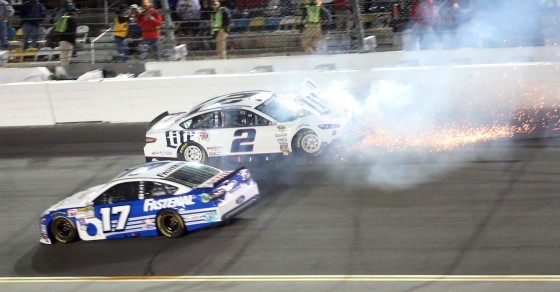 Joey Logano won NASCAR’s 57th Daytona 500 Sunday, despite having a higher crash rate than more than half of his competing drivers. Logano, 24, was shocked when he got out of his car post-race. “This is absolutely amazing,” he said. “Daytona 500, oh my God. Are you kidding me?”

The pressure is so high at the Daytona 500 that the crash rate is almost three times higher than any other track, CNBC found. But Logano kept calm under pressure. The driver in the lead, Justin Allgaier, wrecked with only three laps to go (predictable, maybe, considering Allgaier has an 80 percent crash rate), and Logano took over.

Part of the reason the crash rate is so high at Daytona and Talladega, both 2.5-mile-plus super speedways and the series’ only restrictor-plate tracks, is that they allow cars to go much faster than on intermediate and short tracks. The restrictor plates that NASCAR requires are supposed to make it safer for the drivers by limiting cars’ top speeds to approximately 200 mph; without them, the cars could race at speeds of nearly 230 mph. (Jeff Gordon won the pole with a top speed of almost 202 mph.)

Engineers at PitRho.com analyzed race data from 2001–2014 for CNBC and found that all Daytona drivers had a crash rate of between 40 and 60 percent—close to the Cup series average—and drivers closer to the 40-percent crash rate were more likely to have won the Daytona 500 than those with a 60 percent crash rate.

With this in mind, they said, the drivers to bet on—all with a crash rate of under 40 percent—were Dale Earnhardt Jr., Jeff Gordon, Clint Bowyer, Kevin Harvick, Carl Edwards and Matt Kenseth. The drivers to stay away from, all with a crash rate of higher than 60 percent, were Denny Hamlin, Kasey Kahne, Joey Logano and Brad Keselowski. This is Logano’s first Daytona 500 win.