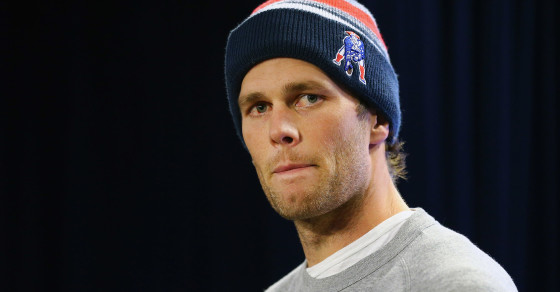 Sports Fans Give A Pass To Off-The-Field Cheaters

Brady talks to the media during a press conference to address the underinflation of footballs used in the AFC Championship game.

Patriots quarterback Tom Brady and coach Bill Belichick may have unilaterally denied intentionally deflating balls in their AFC Championship victory over the Colts last Sunday, but sports fans and pundits are far from dropping the issue. While nonfans may take Deflategate as a joke, sports junkies do not take cheating lightly. In fact, they’d care far less if all of the Patriots had cheated on their wives (supermodels included).

That’s the conclusion of a new study by the University at Michigan, which may also explain why fans and sponsors were so quick to shun Lance Armstrong but remained relatively loyal* to Tiger Woods.

After years of denying allegations of doping throughout his cycling career, Armstrong suffered tremendously in the court of public opinion, eventually losing his seven Tour de France titles and all of his sponsors, eight in one day, including Nike. Woods, on the other hand, was found out for his multiple extramarital affairs, but fans and Nike stuck with him, the latter even trying to revamp his image with a series of new advertisements. (*Yes, we know he lost nearly $22 million in endorsements, but Armstrong’s career completely detonated. After all, Woods is still playing golf—for money.)

The explanation behind this, according to the researchers, is due to a factor called moral-coupling, whereby consumers and fans choose to associate or disassociate an athlete’s poor behavior with his or her athletic performance. People are far more likely to forgive bad behavior if they are able to separate it from an athlete’s on-field performance—a conclusion that puts NFL golden boy Tom Brady in a tough spot, should Deflategate go south.