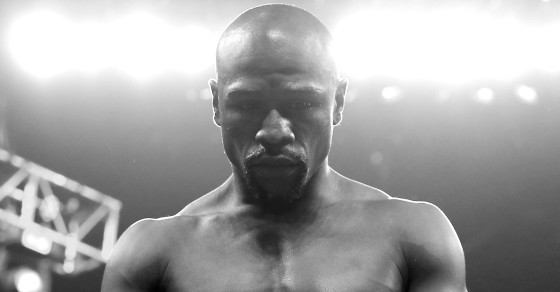 There was no small controversy over the fact that Floyd Mayweather Jr. walked away with $180 million for 36 minutes of boxing in spite of the long string of domestic violence allegations to his name. But Mayweather’s fight actually seems to have done some real good in one sense: Thanks in part to the attention the publicity about him brought to the issue, donations to one national anti-domestic violence organization shot up over the weekend, and calls to a domestic violence hotline surged as well.

Leading up to the fight, thousands spoke out in protest at the fact that Mayweather was even allowed to enter the ring after a long history of domestic abuse allegations. The remorseless and misogynistic Mayweather has been involved in seven domestic abuse cases that have resulted in either arrests or citations over the past 12 years, not including a handful of other incidents in which police were called but that did not result in charges. The boxer served two months of a three-month sentence after pleading guilty to domestic abuse in 2011.

Leading up to the fight, a number of anti-Mayweather campaigns cropped up. Many people shared on social media an image of a statement Mayweather’s son Koraun gave police in 2010 after he witnessed his father beating his mother Josie Harris. Allegations that Mayweather’s camp had moved to have journalists who’ve reportedly critically on Mayweather and domestic violence banned from the fight only added fuel to the fire when two of the reporters in question raised those allegations Saturday.

But the uproar over the Mayweather fight went beyond social media mentions. Some groups encouraged people to act on their frustrations.

Anti-domestic violence advocacy group Breakthrough launched one social media campaign that urged people to boycott the fight and to donate the $99.99 that would cover the pay-per-view fight fee towards one of the many organizations working against domestic violence and supporting victims.

“It was pretty clear that the sports, entertainment and other institutions involved in the fight were not about to send any sort of message that domestic violence was unacceptable. So we did,” said Lynn Harris, vice president of communications at Breakthrough.

The U.S. spends a whopping $5.3 billion a year on the impact of domestic violence, which breaks down to about $99 every .6 seconds, according to Harris. Breakthrough claims that nearly 45 million people saw its campaign and the hashtag it used, #noMayPac.

At least one anti-domestic violence group saw a significant uptick in donations around the fight. Ruth Glenn, the executive director of the National Coalition Against Domestic Violence, said her group saw the bulk of the donations start coming in Saturday afternoon, hours before the fight started. The wave continued through Sunday and into Monday morning, Glenn said. Based on preliminary numbers, Glenn said donations went from a $300 average over the three preceding weekends to $4,000 the weekend of the fight. (In 2013, according to the form 990 the NCADV filed with the IRS, the group’s total revenue was $411,785.)

“When our donors feel as though society, law enforcement or sports organizations aren’t holding someone accountable they feel like the only thing that they can do is provide funding and donations. Basically, someone has to fill the gap,” Glenn said.

“People are frustrated that someone of Mayweather’s stature gets a pass,” Glenn said. “Mayweather is making millions off a fight when we are struggling to provide assistance to victims and survivors of domestic violence.”

A number of people also appear to have donated to local anti-domestic violence organizations, prompted by members of the media like ESPN’s Sarah Spain.

Similarly, the National Domestic Violence Hotline said it experienced an 80 percent increase in the number of donations it received the week leading up to the fight compared to the previous week. Of the donations received on Saturday, roughly 90 percent came in after the fights leading up to Mayweather’s began.

The hotline also saw a 15 percent increase in the volume of people contacting it seeking assistance.

“What will happen is that someone may not even realize that they are experiencing violence in a relationship, but then they see thing play out in the media and hear these conversations and reach out because they realize something isn’t right,” said Cameka Crawford, chief communications officer for the hotline. “What we think is important is the awareness that is created because you give people a vocabulary to talk about domestic violence.”

Crawford cited the Ray Rice incident in the fall of last year as an example of the impact a national conversation can have on domestic violence. She said that prior to the Sept. 8 release of a video showing Rice knocking his then-fiancée unconscious, the hotline received between 700 and 800 phone calls, online chats and text messages per day. After the video’s release, the number of those such contacts increased by 84 percent. (The hotline also saw an increase in donations at the time.) The number of contacts the hotline receives has still not dropped below pre-Rice levels. The average now, in weeks without the Mawyeather fight, is 1,155 calls, chats and text messages per day.

“I think what we are seeing is people getting angry. People are frustrated that someone of Mayweather’s stature gets a pass,” said Glenn. “No one pushed the issue enough that this man would even speak out and say that he made a mistake. He was able to avoid the questions. He was shielded. He has been shielded from it over the course of time. Everyone is not being held accountable.”