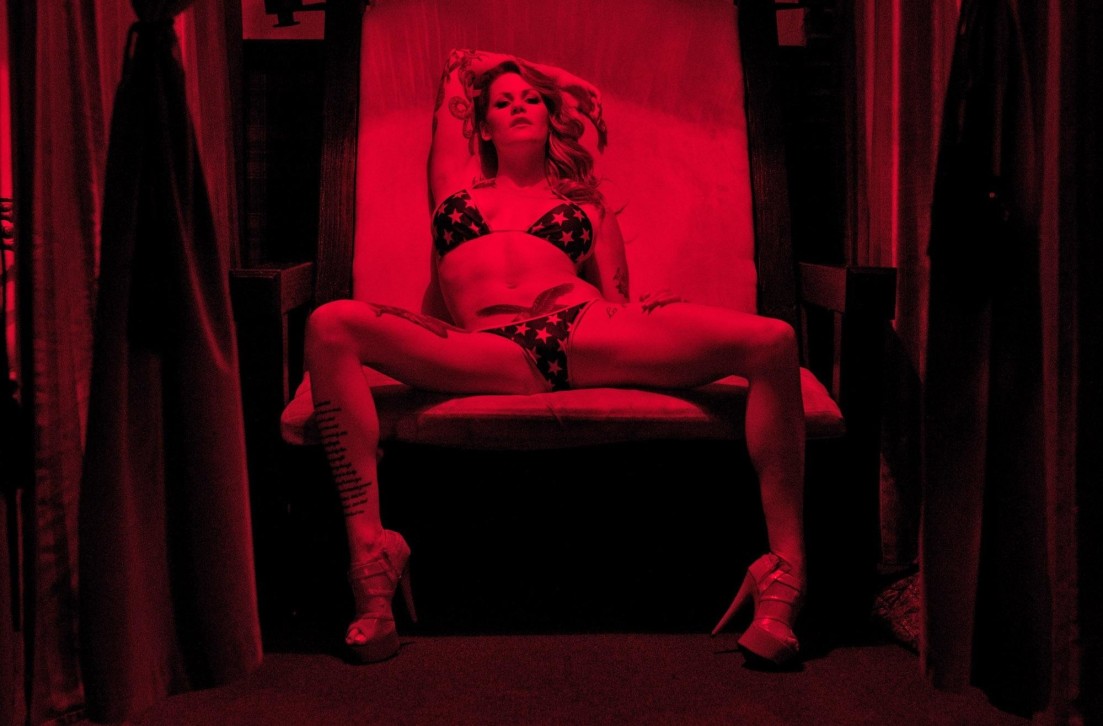 PORTLAND, OREGON—Lynsie Lee pulls on a pair of leopard leggings and a black hoodie, reaches into a box full of wrinkled $2 bills and stuffs a hundred of them into her purse. She cracks a hard cider and stalks out the door, stopping to admire her 5-year-old daughter’s artwork taped to the front window of her East Portland apartment. It’s a self-portrait, commissioned in honor of Thanksgiving, with the girl in the background and a dead turkey in the fore. The bird’s eyes are x-ed out. Lee finds it hilarious.

On this particular Saturday night, the 26-year-old stripper decides to ride with me. When you live 15 miles from work, at the world’s first vegan strip club, Casa Diablo, carpooling just makes sense.

“I’ll find a way home lol,” she texted me earlier.

At the club, Lee walks past the stage, straight to the bar in the back and orders a Don Julio with a pineapple back.

“Someone called here for you, from New York,” the topless bartender reports, with a bewildered look. “He goes, ‘Can I see Lynsie Lee tonight?’”

Calls like this have slowed down in the past couple of months, as Lee’s association with New Jersey’s Mayor-cum-Senator Cory Booker fades from the headlines. The 26-year-old stripper’s 15 minutes of fame expired not long after it was “discovered” by Buzzfeed that she’d exchanged a few innocuous and—gasp—slightly flirtatious tweets with the unmarried rising-star Democrat after meeting him on the set of a documentary about Twitter in 2012.

But Lee has put that 15 minutes to work, thanks to her mastery of social media. She landed a four-page spread in Hustler, firmly established herself as a mistress of naughty social networking, and is now the darling of the Portland stripper set, a notoriously competitive and catty cabal.

This month, she attended the annual PDX Strippies industry awards ceremony, where she was nominated for Miss Congeniality—and won.

Lee was already smart, already funny and already good at Twitter before her brief run as the most famous stripper in America. She’s one of those people blessed with frequent bursts of 140-character inspiration. Consider some recent, unedited gems:

“My vagina wasn’t made in china, no discounts on lap dances.”

“I just realized Disney has more than one movie about Bestiality…”

“People who don’t like Christmas music: who hurt you?”

She might not be Tina Fey in real life, but she could give Margaret Cho a run for her money. What makes Lee remarkable is how she turned a brief moment in the national spotlight into a substantial following. Other dancers have taken note: Lee’s “Wits and Tits” (her Twitter subhead) now reaches more than 18,000 followers, clout she uses not just to boost her own business at Casa Diablo but to help out her co-workers.

Lee is known to refer her Twitter followers to other dancers at the club. She also interacts with just about everyone who tweets at her. On Tuesday, for example, she spent the day arguing with various Christians after she pissed several of them off by calling the cross a “torture device.” This tweet—“Fave if you love me. RT if you want to tongue punch my fart box”—resulted in 46 faves and 22 retweets. So those votes are in.

The story quickly disappeared into the Internet ether, largely because there was no actual story. But Lee seized upon the opportunity and grabbed some serious stripper cred, not for her butt clap but for demonstrating that exotic dancers aren’t necessarily dumb sluts (not that you thought that).

“It’s good to have women like her representing us,” says Dahlia, another dancer at Diablo.

“It’s free networking,” says Luv. “And it’s an easy way to keep in touch with your customers without giving them personal info.”

Lee was born and raised here in Portland, and Lynsie Lee is her actual first and middle name. While she never thought she’d wind up naked for a living, it didn’t take much to get her there. Three months after giving birth to her daughter, she learned from a friend about how easy it was to make money “webcamming”—stripping on the Internet at a site called God’s Girls—in the privacy and comfort of her home, and on a mom-friendly schedule.

Lee wanted to be a stripper for years before she actually became one, but didn’t think she was a good enough dancer.

“I thought you had to booty clap to be a stripper,” she says.

Turns out, you don’t. But exhibitionism helps. The first time she wound up on stage was at Casa Diablo in 2010.

The venue had a reputation for being “trashy,” Lee says (though she’s since learned it’s not true). It also had a gimmick—the world’s only vegan strip club—which means simply that girls can’t wear real leather and customers can’t eat animals. It’s located in an industrial area just outside the reaches of Portland’s yuppie Pearl district, and it draws clientele from all over. The slogan: “We put the meat on the pole; not on the plate.”

On Lee’s very first night there, her friend Dahlia, a dancer, pulled her up on stage and ripped off all her clothes. “We ended up 69-ing in front of everyone at the club,” says Lee. “It felt completely natural.” She was hired on the spot.

“I was always the girl at parties telling all the girls to take their tops off,” Lee says. “I’m sexual. I embrace my daddy issues. I’m proud of my body.”

On this Saturday night at Casa Diablo, Lee has just changed into a red thong, matching red heels and a white tank top that leaves her midriff bare. After another Don Julio and a back massage at the bar from Buster, the club’s de facto masseuse, she hits the floor.

Her job is pretty simple: flirt with customers, hope they ask for a lap dance, collect $40 a pop. Very occasionally, Lee’s brush with fame translates into business. But Booker and his stripper pen pal made more waves on the East Coast, she says, and the Portland customer base isn’t exactly the kind that pays attention to national politics.

But Lee does get business from Twitter. Followers will often ask when she’s working via tweet; and when she’s not dancing, she’s known to recommend specific co-workers—gotta protect that Miss Congeniality crown.

Lee is consistently one of the club’s top dancers, which she insists is due in part to her gift of gab. “I can talk to everybody about anything. A lot of people come here to talk,” she says. Tonight, she’s employing her ample charm and, of course, her tits, which she had reenforced with silicone after breast-feeding “left them droopy.” She’s proud of how real they seem.

“Wanna feel them?” she asks.