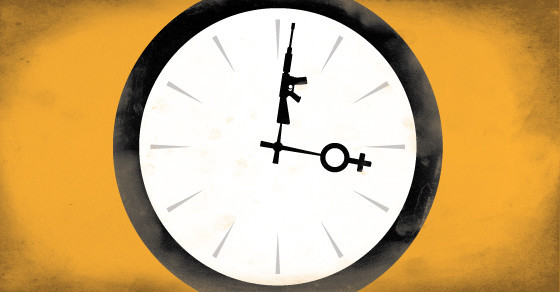 Twice As Many States Have Abortion Wait Times Than For Guns

Guns and abortion should be odd bedfellows. After all, those who campaign pro on both issues typically occupy opposite ends of the political spectrum. But these hot button issues do share one thing in common—state-mandated wait times regulate how long it takes to obtain a gun or an abortion.

After North Carolina’s approval last week of a 72-hour wait period for abortion, Vocativ compared restrictions on terminating a pregnancy and buying a firearm. We found that more than twice as many states require wait times for abortion than guns. There are only 10 states, plus the District of Columbia, that require gun wait times, which range between 24 hours and 14 days. Those are California, Hawaii, Illinois, Rhode Island, Minnesota, Florida, Iowa, Maryland, New Jersey and Wisconsin.

The rest of ‘em? They let you purchase a gun as fast as the seller can run a background check. When it comes to abortion, there are 26 states that make you wait anywhere from 18 to 72 hours. In short, you have to wait longer to buy a gun than get an abortion, but you’re much more likely to have to wait for the latter. This all leads to the larger question: What impact do these waiting laws—generally introduced to help prevent impulsive or regrettable acts—have on people? 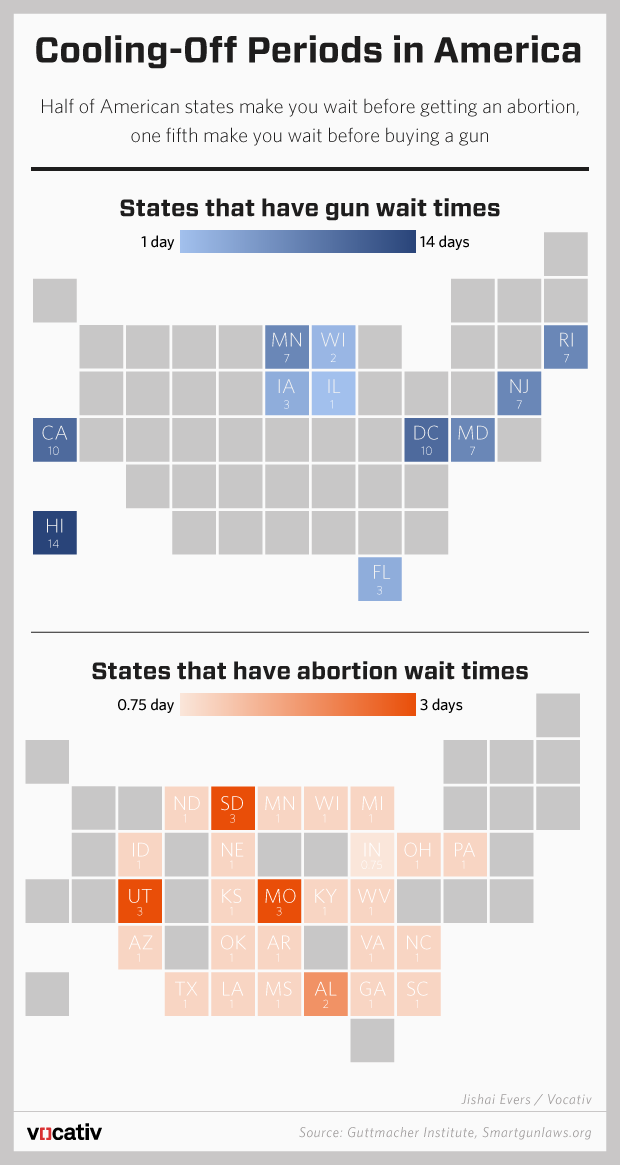 Waiting periods as a whole have not shown to impact the abortion rate. Laws requiring two in-person clinic visits are believed to have a far greater impact on decreasing abortions. “Having to make two visits results in additional costs and difficulties scheduling,” says Sarah Roberts, assistant professor of Obstetrics, Gynecology and Reproductive Sciences at University of California, San Francisco. “This could affect state abortion rates in a number of ways.” For example, research shows that two-visit laws are associated with higher rates of going out of state for abortions and Roberts speculates that this could be a result of women trying to avoid the requirement.

In general, though, women tend to be confident in their decision to have an abortion by the time they first show up at the clinic. As the Guttmacher Institute concluded in a review of relevant research, “In nearly nine out of 10 cases, women expressed high confidence in their abortion decision before they received any counseling; these women would likely not benefit from additional mandated counseling or delay.”

Even in states where two visits are required, the majority of women who begin the process ultimately go through with the procedure. Preliminary results from an unpublished study of women seeking abortion in Utah, where there is a 72-hour wait and two required visits, showed that 85 percent ended up having the abortion, said Roberts. “The vast majority of women were very confident in their decision when they presented for their abortion information visit and then went on to have an abortion,” she says.

That brings us to guns. Unfortunately, the research in this arena isn’t strong. “There aren’t studies that have said the waiting period definitely helps or doesn’t help,” says Mike McLively, a staff attorney at the Law Center to Prevent Gun Violence. “Anyone who has studied it has said it’s too hard to conclude.” A 2003 CDC survey of the research states: “Studies of the effects of waiting periods on violent outcomes yielded inconsistent results: some indicated a decrease in violent outcome associated with the delay and others indicated an increase.”

Yet, after a five-day waiting law was imposed across the country for four years in the 90s, there was a decline in the number of men killing their significant others or ex-girlfriends with a gun. States with waiting periods also generally have lower levels of gun violence. “Ten states have waiting period laws and of those ten, seven are in the top ten states in the country in terms of lowest levels of gun violence,” says McLively.

Research has also shown a decrease in suicides associated with waiting periods. That’s where McLively says the scientific evidence is strongest. “Here we actually have rigorous scientific data,” he said. That includes a study of survivors of self-inflicted gunshots; more than half reported having suicidal thoughts for less than 24 hours prior to shooting themselves. That’s pretty striking when you consider that 90 percent of people who attempt suicide and fail do not go on to later kill themselves. As McLively puts it, “Suicide is an impulsive act.” Consider, too, that 90 percent of suicide attempts with a gun are fatal.

Some research has shown abortion waiting periods to have an impact on suicide rates as well, but the Guttmacher Institute has reviewed the evidence and deems it “implausible.”

When it comes to abortion, we know a bit more about the emotional impact of wait periods. Daniel Grossman, vice president of research at the non-profit Ibis Reproductive Health, says, “In general, what we know about wait times is that they’re burdensome for some women,” he said. “There can be negative emotional reactions to having to wait.” He contributed to a survey of more than 300 women seeking an abortion in Texas, which has a 24-hour wait period, and found that a third said that being forced to wait negatively impacted their emotional well-being. That said, 18 percent felt it had a positive impact.

“There were some women who said they did like having the additional time to think and get prepared, and some woman said they needed the extra time to get the money together,” he said. But as he pointed out, those women would have the option to wait without a law.

An older survey in 1979 of more than 300 abortion-seekers in Tennessee, which at the time had a 48-hour wait period, found that 29 percent experienced “mental anguish” and 77 percent saw no benefit to the waiting period. On top of that, the required second visit raised costs for low-income women by 48 percent. A majority said that the second visit cost them additional money in the form of child care, lost wages and transportation.

Indeed, money is one area where there is a clear impact from abortion wait periods. Roberts’ research has shown that a second required visit to a clinic increases women abortion-related costs by 10 percent. It also requires them to tell more people about the abortion in order to coordinate both visits. “There was a whole set of logistical challenges that they had in terms of getting time off of work, in terms of making arrangements for transportation. All of those they had to do more than once,” she said. “For some of them, [the wait period] extended their days of pregnancy symptoms, making them feel nauseous longer.”

While the women she surveyed were technically subject to a 72-hour wait, it often actually delayed women’s abortions by more than a week, revealing a fundamental difference between the implications for waiting times for abortions versus firearms. It isn’t possible to get “too far along” in the quest for a gun. “We had one woman in our sample who was unable to have the abortion because of the delay,” Roberts says. “If she had been able to have the abortion on the day she presented for her abortion information visit or 24 hours later, she would have been under the gestational limit at the facility where she presented for care.”