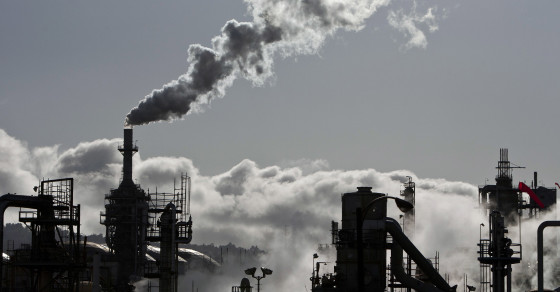 The U.S., which pledged on Tuesday to make a sizeable cut in its greenhouse gas emissions, spews more of those pollutants than just about any other country in the world. America is the globe’s number-two carbon polluter, behind China. Rounding out the gang of six are the European Union, India, Russia and Japan. As a group, they account for a whopping 70 percent of global CO2 emissions.

Worldwide, greenhouse gas emissions hit 38.9 billion tons in 2013 (most recent data available), about two percent more than the year before. And the number is rising: Emissions were expected to hit 40 billions tons in 2014. To put those numbers into perspective, one ton of pure carbon dioxide would fill a balloon with a diameter of roughly 10 yards, according to the Environmental Defense Fund. Picture that and then multiply that image by 40 billion. The biggest contributors to greenhouse gases are the burning of fossil fuels like coal and natural gas, and the usage of oil and gas in cars and other vehicles.

The European Union has agreed to cut emissions by 40 percent over the next 15 years, while China said that its emissions will peak by 2030, reported the Guardian. The U.S. promised Tuesday to cut emissions as much as 28 percent by 2025.