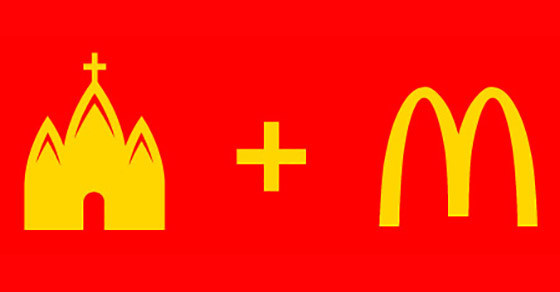 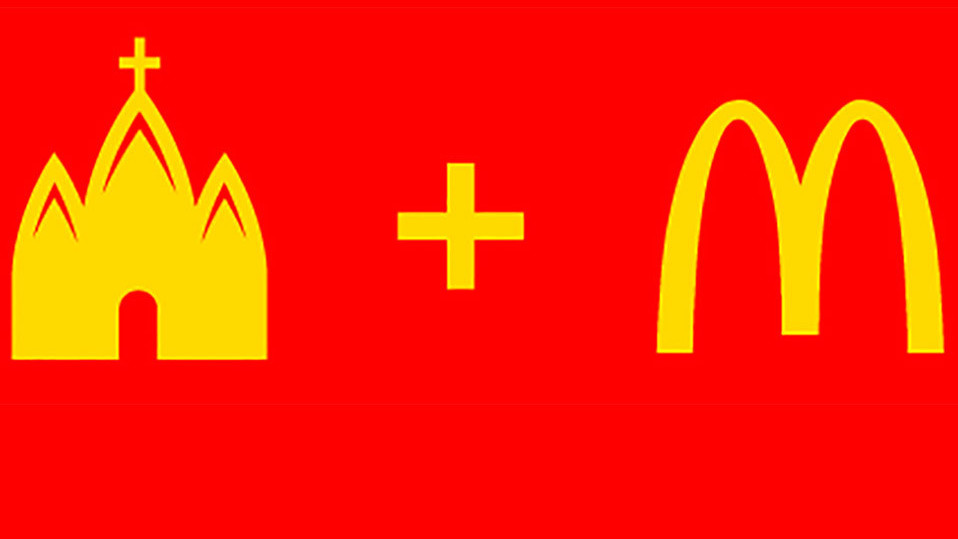 A budding young entrepreneur believes he can stop the rising tide of Christians abandoning the church by offering fries with that.

Paul Di Lucca has turned to Indiegogo to help fund the purchase of a McDonald’s franchise that he one day hopes to open inside a house of worship. Christened the McMass Project, the proposition will cost around $1 million by Di Lucca’s estimates. But what the 28-year-old visionary lacks in capital, he is already making up for in marketing know-how.

The fledgling campaign has a catchy slogan, “It’s time to pray different,” a slick promotional video and a hashtag for social media, #Feast4Jesus. Di Lucca’s also cooked up a clothing line of branded baseball hats and t-shirts featuring the McMass logo, a crucifix dangling above golden arches reimagined as flying buttresses in a cathedral.

In fact, we thought the concept was so ridiculous, yet so superbly polished and packaged, that it had to be some elaborate hoax. So we contacted Di Lucca directly to call bullshit. But the New Jersey resident insisted that the First Church of McDonald’s is neither parody nor stunt.

“Will McDonald’s save Christianity in America? Maybe not—and in fact, probably not,” he said. “But the McMass Project has the power to get this conversation started.”

Here’s where Di Lucca would like to start. Citing oft-reported statistics—three million people left their church in the U.S. in 2012, and 10,000 American churches shuttered their doors last year alone—Di Lucca argues that the only way to reverse the troubling trend is for those churches to partner with one of the world’s most recognizable brands.

De Lucca hopes everyone will be lovin' his merchandise.

And like the 70 million customers who dine at McDonald’s each day, Di Lucca isn’t picky. The McMass Project will partner with any Christian denomination, as long as it can help spread the word of God in between servings of Filet-O-Fish. McDonald’s has yet to respond to our request for comment.

Unfortunately, not everyone is lovin’ the idea at this time. As of Tuesday night, Di Lucca had raised a mere $77 from a total five supporters. And a much larger chorus of detractors appear to be skeptical.

“This is the fucking dumbest idea in the history of dumb ideas.” wrote Russell Odal on the McMass Project Facebook page.

Jay Bartgis chimed in with: “This is the most retarded idea I have ever heard in my entire life.”

Petey Corvus was no less forgiving. “You people are just gross,” he wrote.

Di Lucca admits that the idea is a tough sell. “We realize that The McMass Project, in choosing McDonald’s, must appear controversial, or even absurd, to any Christian,” he said.