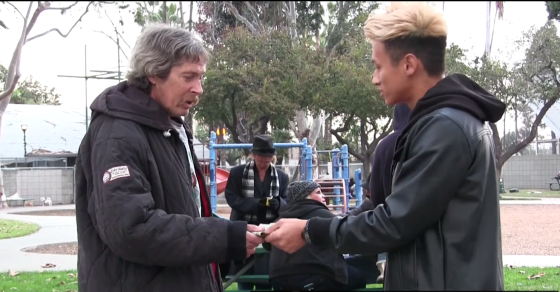 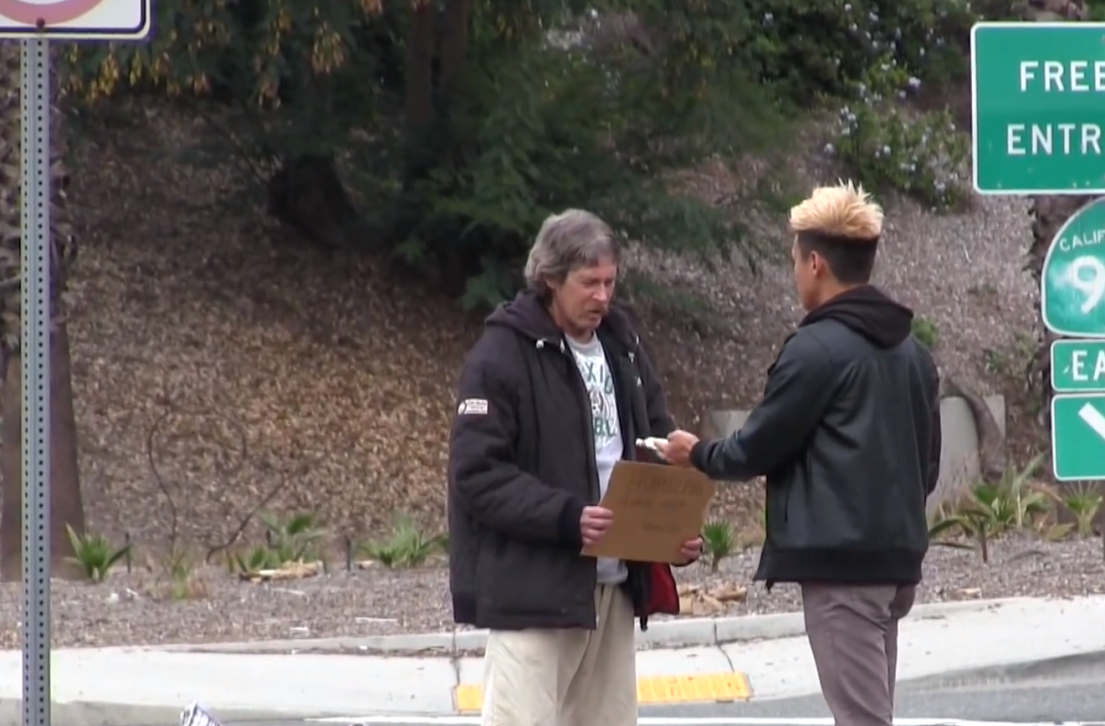 As a feel-good video of a generous homeless man continues to touch and move millions around the world, a California man has come forward to claim that the Internet prankster behind it faked a significant portion of the film, confirming our earlier suspicions.

In the video released last week, YouTube star Josh Paler Lin purports to give a homeless man named Thomas $100 and then secretly follow him around to see how he spends it. Thomas walks right into a liquor store. But instead of alcohol, the homeless man defies expectations and walks out with a couple of bags of food, then heads to a nearby park and starts giving it away to other people down on their luck. Apparently moved by the selfless act, Lin confronts Thomas and tells him that he’s being filmed.

As of Tuesday morning, the video had racked up more than 27 million views on YouTube and inspired more than 150 glowing news articles from around the world. Following its success, Lin launched an Indiegogo fundraising campaign to “help Thomas get a fresh start,” which has netted more than $127,000 in well-meaning donations from the public.

But now a nursing student from Anaheim has come forward to say there’s no way Thomas could have been secretly filmed—because he and Lin arrived at the liquor store in the same car. “The whole thing is bullshit,” says Taugan Tan Kadalim, who claims that on Dec. 20 he was outside the Euclid Liquor & Market, where the video’s pivotal scene is set. “Thomas knew he was being followed.”

The 26-year-old says he stopped at the store to buy a lottery ticket before picking up his girlfriend, who lives in an apartment complex directly across the street. As he was walking out of the liquor store, Kadalim says he spotted Lin sitting in the driver’s seat of a nearby vehicle and recognized him immediately from his previous prank videos. “I was like, ‘Oh my God, it’s him,” says Kadalim, adding that he subscribed to Lin’s YouTube channel. “I couldn’t believe it.”

A cameraman sat in the passenger seat of Lin’s car, and behind him was the man who Kadalim would later recognize as Thomas, the homeless Samaritan Lin claims was secretly followed with a hidden camera. Thinking the three men were about shoot a prank video, Kadalim decided to stick around and watch.

What Kadalim says happened next is sure to disappoint many of the millions of viewers who have been touched by the video.

According to Kadalim, Lin hopped out of the car, went inside the liquor store and spoke with the cashier. While the two men chatted inside, Thomas waited with his bag by Lin’s car. Eventually, the prankster returned to his car, and a few minutes later, Thomas wandered into the liquor store. Several calls to Euclid Liquor & Market to confirm Kadalim’s account went unanswered.

“That was the last thing I remember seeing,” Kadalim says.

In the actual video, Thomas appears to be followed from a distance for several blocks, and as he enters the store, Lin says to his cameraman, “Keep filming. Make sure he doesn’t see you.”

Kadalim says he immediately fired off a text message about the sighting to his brother, a fellow YouTube prank enthusiast. He shared the text with Vocativ, and the date and time stamps appear to match up. Kadalim’s girlfriend, who spoke on the condition that we not use her name, also corroborates the account.

“He told me that he had just run into some famous YouTube star while buying a lotto ticket,” she tells Vocativ. “Don couldn’t wait to watch the video.”

But when Kadalim did see the video, released on Dec. 22, he was floored.

“Bro, he drove Thomas to the liquor store,” he says. “While I think the guy is homeless, it is clear that from what I saw every part of that scene was staged.”

Upset, Kadalim called his girlfriend and his brother to tell them what happened. As the video started to go viral just before Christmas, he posted a comment to Lin’s YouTube channel explaining what he witnessed. His words, however, were quickly buried beneath an outpouring of praise as thousands left comments in support of the video.

Prior to Kadalim’s revelation, Lin told Vocativ that not a single scene had been staged or scripted. “There is no way we’re making any of this up,” he said. “This is real.”

Subsequent attempts to reach Lin for further comment on Kadalim’s accusations were unsuccessful.

After the video went viral, Lin told us previously that he plucked Thomas from the homeless shelter where he’d been staying and put him up in a hotel, the name of which Lin would not disclose. Lin has also refused all media requests to speak with Thomas, and he denied repeated requests from Vocativ to make Thomas available for an interview. At the same time, he’s been busy producing more videos starring the homeless man, including this “Xmas Surprise Makeover,” released Sunday.

Lin also informed us that he has at least one more major media event in the works, in which he plans to surprise Thomas with all of the money that’s been raised for him on Indiegogo. Asked how the public could be certain those funds would actually go to Thomas, Lin told us that his lawyers, agent and manager have everything “covered.” When asked for the names of his lawyers, agent and manager, Lin refused to provide them, claiming they are “confidential.” He also declined to let any of them speak with Vocativ.