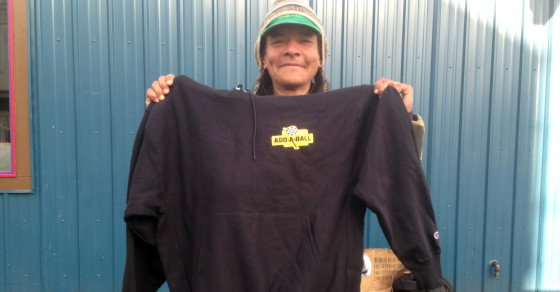 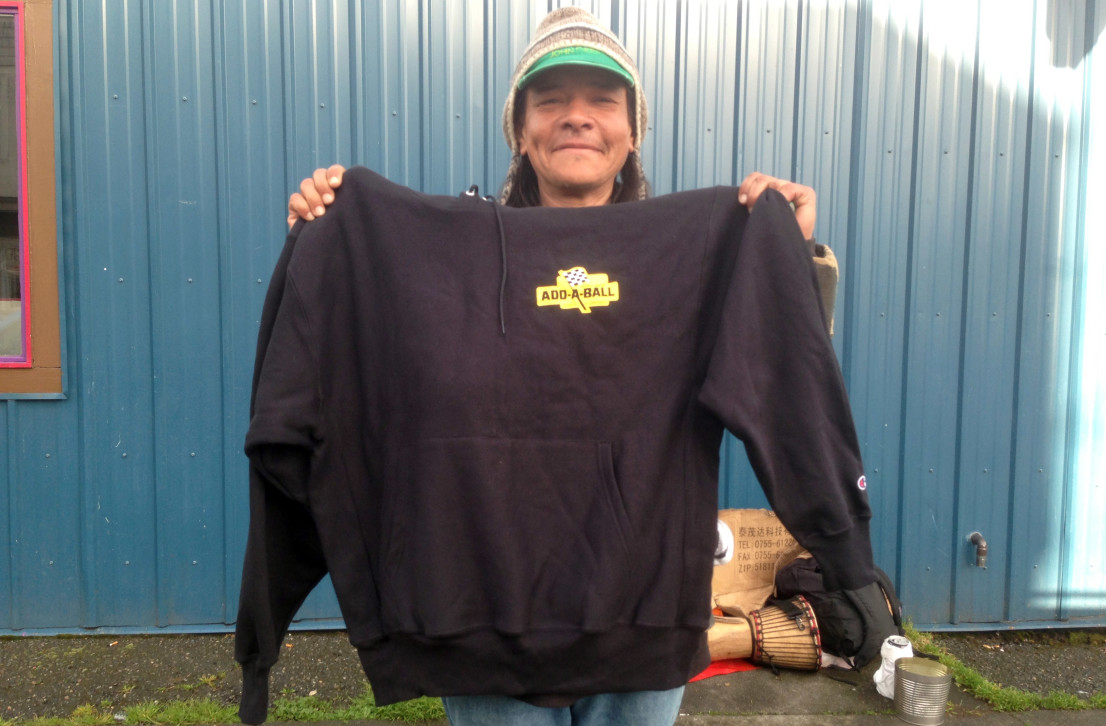 .
The owner of Add-a-Ball Amusements, a Seattle bar and arcade, has come up with what he’s pretty sure is a foolproof plan: Turn homeless people into walking advertisements by offering them free sweatshirts.

The entertainment venue launched its “Hoodies for Hobos” campaign at the end of March, promising to use the profits from all in-store T-shirt and apparel sales to outfit the city’s street people “with some fresh gear.”

Add-a-Ball Amusement's newest brand ambassador
(Facebook/Add-a-Ball Amusements)
“I will post a pic of every new bum we spruce up,” writes Add-a-Ball owner Brad Johnsen, with what appears to be characteristic sensitivity. The company’s Facebook page is a mosaic of snapshots of homeless men and women sporting the arcade’s signature swag.

Reached by phone, the mastermind behind Hoodies for Hobos was happy to elaborate on what he sees as a win-win campaign.

“I’ve done well. I got a Rolex and a Miata,” says Johnsen. “Doing this makes me feel better. If it also encourages people to go play pinball and get drunk—all the better.”

The Fremont business owner says he was “a little bit buzzed” and chatting up a man on the street when he thought of the idea to start handing out black sweatshirts emblazoned with Add-a-Ball’s yellow logo and checkered flag. He says he’s already equipped more than 30 of Seattle’s down-and-out.

Add-a-Ball owner Brad Johnsen (not a homeless person) agreed to let us post this picture on the condition that we mention he is single.

“I kick it with bums all the time,” says Johnsen, who may or may not be the real-life embodiment of Charlie from It’s Always Sunny in Philadelphia. “My whole thing is that they just want to get drunk and high like the rest of us. But sometimes they smell funky and downright nasty.”

Predictably, the city’s politically correct are none too pleased with Johnsen’s big idea. “They lost any support from me when they got to the derogatory terms,” Elaine Simons, an advocate for the homeless, told KOMO-TV. “I feel it leans toward exploitation.”

Johnsen brushed aside the criticism from “that hippie lady” and others. “There’s some wet blankets saying I didn’t use the proper verbiage,” he says. “I mean, I call my cat the N-word when nobody is around. I welcome the criticism. I’ll just be down at my bar kickin’ it if they want to talk.”

Whether it was originally intended as a goodwill gesture, a cynical marketing scheme or something in between, history tells us it’s only a matter of time before “Hoodies for Hobos” backfires in spectacular fashion. The only real question is how bad it will get.

New York ad agency BBH Labs faced a ferocious backlash in 2012 when it tried to transform homeless men and women in Austin, Texas, into wireless hot spots at the city’s South by Southwest conference. And in 2005, a Seattle web entrepreneur’s scheme to pay homeless people to hold up signs with his URL on street corners, which he called “Bumvertising,” was so ridiculous The Daily Show parodied it.  In both cases, however, the homeless people in question were actually paid.

Bad taste and exploitation aside, as far as we can tell, the biggest flaw in this particular marketing campaign has to be when your billboard takes a shit in the park or goes on a bath-salts rampage.

Johnsen says he’s willing to let the chips fall where they may. “I’m a little bit of a goofball, sure. Admittedly manic,” he says. “But I get the job done and pay the bills.”