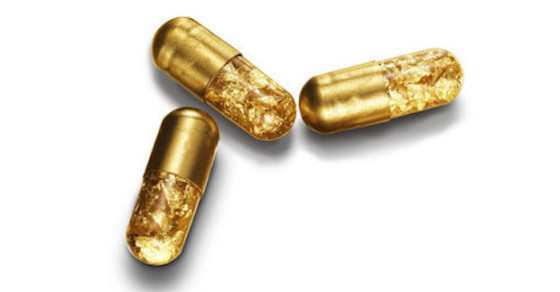 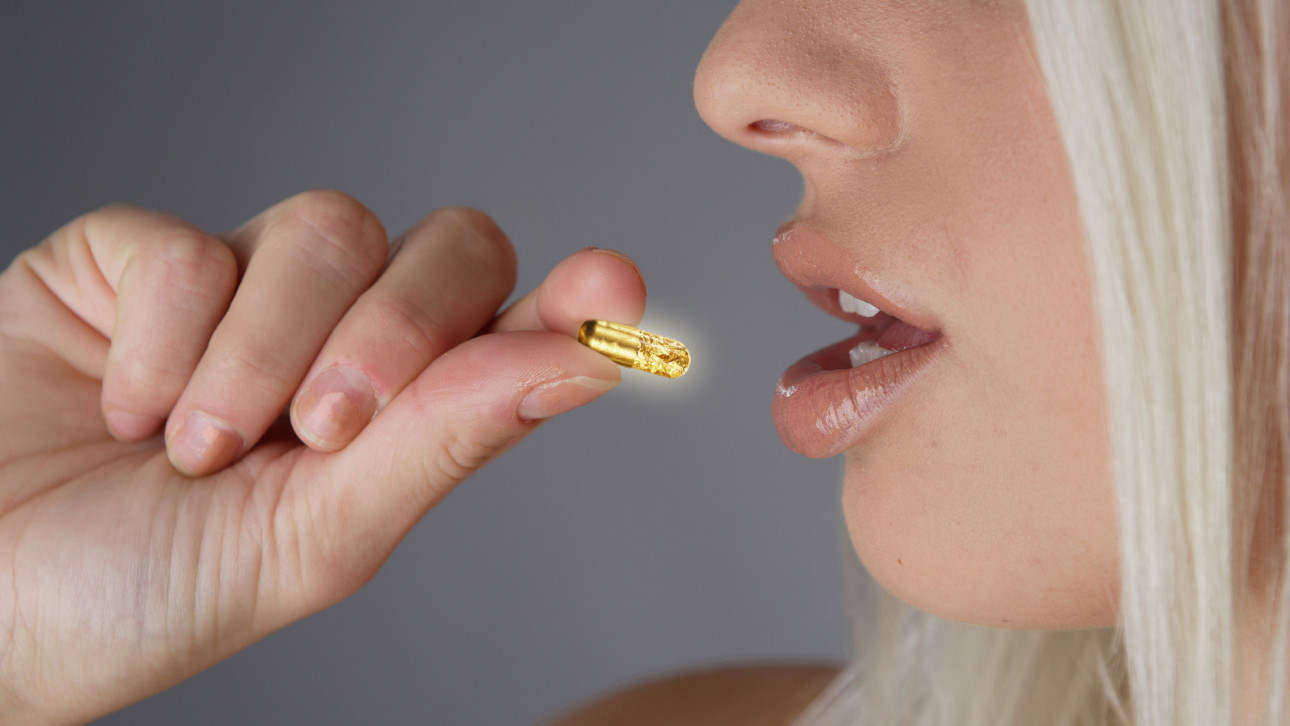 What’s a glitter pill? In one sense, it’s exactly what it sounds like: a transparent gelatin capsule filled with glitter. What’s the point of a glitter pill? We have no idea. As far as most of the Internet is concerned, glitter pills are nothing more than a crappy punchline—and we do mean “crappy” both figuratively and literally. If you take one, rumor holds, you’ll poop glitter.

But here’s the problem: They aren’t technically edible. As redditor ultradip asks, “What else are they for, if they’re not meant to be eaten?”

The mere existence of glitter pills has recently captured the imagination of Reddit, Twitter, Tumblr, Instagram and Pinterest, thanks to either the shimmery stool factor (ahem, Reddit) or the pills’ inherent aesthetic value (ahem, Pinterest). But fancy pills—and the theoretical fancy feces that follow them—aren’t exactly a new idea. In 2005, artist Tobias Wong designed 24-karat gold-leaf capsules as a critique of meaningless luxury goods. If you happen to be in the market for meaningless luxury goods, Wong’s capsules go for $425 each.

Though glitter pills are a relatively straightforward—and apparently quite popular—DIY project, you’ll find plenty of places to buy them online. On Etsy, the preeminent seller of glitter pills is the aptly named GlitterPills, a shop run by a man named Kyle and his wife, Shavonna. Since they got started in February of last year, they’ve fulfilled more than 100 orders for thousands of glitter pills.

“As you can imagine, we get a lot of people every week who ask if GlitterPills are supposed to be consumed,” Kyle tells us. “The answer is a resounding no.”

Kyle and Shavonna’s product descriptions explicitly indicate that the pills are purely decorative, and a note included with every purchase reminds customers to keep them out of the reach of children (although the pills are made with “nontoxic, extra-fine glitter,” just in case). Besides eating the pills—which, again, you really, really aren’t supposed to do—what are people doing with them? Even Kyle isn’t “totally sure” what becomes of what he sells.

Occasionally, buyers have written that they’ve purchased the pills as gifts. “We have [also] had a customer say they’re using them in a sculpture,” he says. “We would love to know what the majority of them are being used for, though!”

Well, from what we can tell, it varies. The directions printed on one novelty prescription bottle of “emergency glitter pills” seen on Twitter instruct the user to open a capsule, “throw glitter in the air” and “smile.” On Instagram, Her2 Cosmetics hawks glitter pills for 35 cents each, to be “used on eyes and lips.”

But for most casual observers (ourselves included), it’s hard to conceive of a purpose for glitter pills beyond—to paraphrase Dave Chappelle—making one’s dookie twinkle.

Over on FB someone shared a posting from Etsy...they're glitter pills for your poop! Just what you need, bedazzled bowels! #smh

They make glitter pills to make your poop have glitter in it...

Let me get this right.. You can buy 'glitter pills' to make your poop sparkly? Am I on crack this is a thing?

For every 100 people on the Internet jokingly claiming they’ll try something, there is inevitably one guy who really means it. When this person does swallow a handful of capsules filled with glitter, what can he or she expect?

We haven’t seen any visual evidence of glittery human feces, which is probably for the best. A compelling photo of questionable provenance posted on Reddit in 2012 depicts an undeniably sparkly pile of poop that purportedly came about after someone’s dog ate glitter. (In general, the canine consumption and subsequent defecation of glitter appears to be a fairly common topic of discussion among dog owners online.)

Emily of Eat Glitter first designed her line of glitter pills as an art project in 2011, and believes she was the first to sell them online. She says shoppers routinely inquire as to whether her wares will make them “shit sparkles.” In her experience, they probably won’t.

“I have had customers ask for a refund because this did not happen,” she tells us. “I can’t honor these requests because I make no claims they will, and I explicitly advise against consuming them.”

Your mileage may vary. “Supposedly, if you eat enough of them, it should work,” she says.

Eat Glitter offers glitter pills in a variety of colors, including "slime" and "unicorn food." A pack of two sells for $7.

The scientific literature has yet to address the phenomenon of glitter poop. We’ve discovered firsthand that it’s a subject on which the medical community at large is understandably reluctant to comment.

“I don’t think [eating glitter] is medically advisable,” says David Cromwell, an assistant professor of medicine at Johns Hopkins, in an email. “Nor do I think there’s any evidence that it’s ill-advised.”

All the pills we’ve encountered online are reportedly manufactured with nontoxic glitter, but it’s important to note that “edible” and “nontoxic” aren’t the same thing. Technically, “edible” means your body will digest the substance normally, whereas “nontoxic” means it isn’t poisonous. (Confusion about this distinction caused a minor scandal, Glittergate, on The Great British Bakeoff in 2012.) For example, Disco Dust—a finely ground plastic intended for crafting and “display cakes”—is nontoxic, but inedible. “These dusts are not FDA approved,” reads boldface text on the manufacturer’s site. “They are not a food product and should not be considered as such.” There’s been minimal research as to the health effects of eating “glitter-sized fragments” of nontoxic products like cake decorations.

Simply put, having a taste of the stuff won’t kill you, but no one’s suggesting you casually snack on it, either. It’s also unclear exactly how much glitter you’d need to eat to produce a turd worthy of Tinkerbell—just as it’s equally unclear how much you’d need to eat to disrupt the comfortable, optimal functioning of your bowels.

If you’re dead set on swallowing some shimmery pills, there are edible, starch-based glitter products on the market, like Wilton Cake Sparkles. That said, it seems far less likely that they’d produce a noticeable glimmer in your bowel movements. Your body will digest edible glitter as it would normal food, whereas inedible glitter by definition passes through your system in something close to its original form. Tough shit, huh?