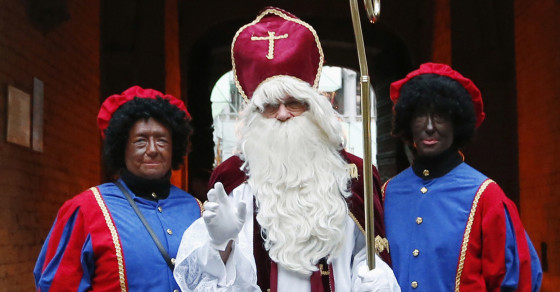 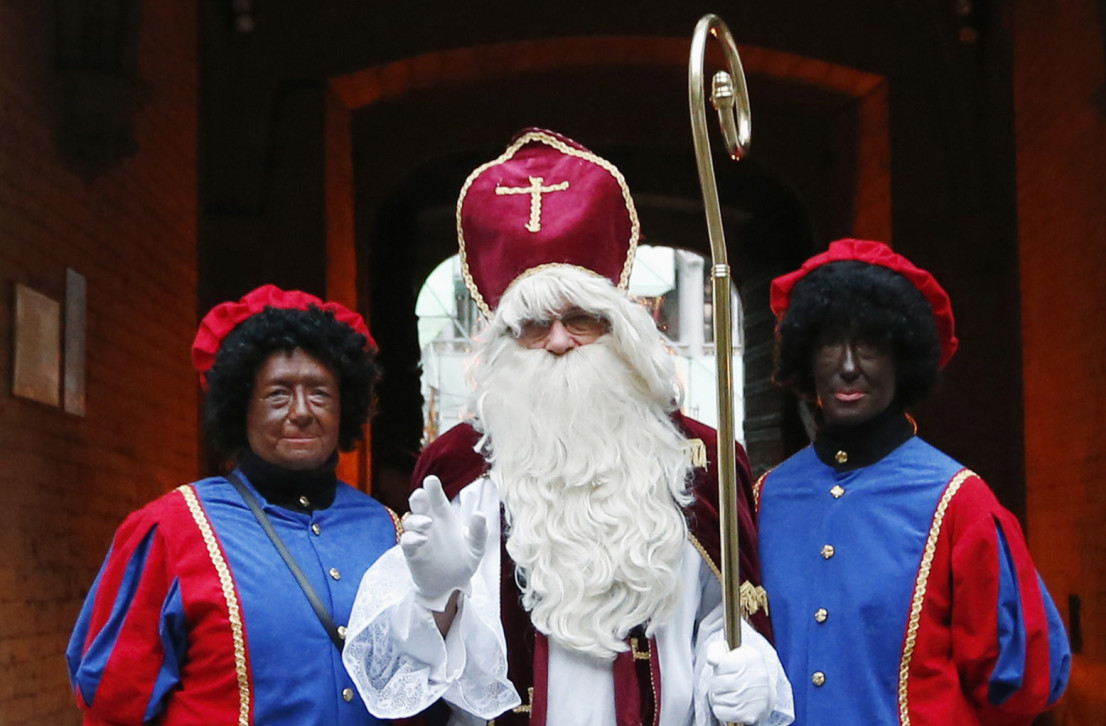 Will straight hair and a lighter complexion help take the sting out of a racist Dutch holiday character?

That’s the dilemma surrounding Zwarte Piet, or Black Pete, a character who white people regularly portray in blackface and bright red lipstick to commemorate the Dutch holiday of St. Nicholas.

The new Black Pete, right, has straight hair and no earrings.

Black Pete remains a popular and integral figure in Sinterklaas, the feast of St. Nicholas. But Black Pete’s outdated representations—similar to the blackface minstrel shows from American history—have led to calls to have the character removed from the feast’s public ceremonies.

The Dutch Center for Folk Culture and Immaterial Heritage unveiled an image makeover last week for Black Pete. Gone were the golden earrings and black, curly wig, replaced by long, straight hair and lips in a subtle shade of red.

The redesign of Black Pete’s appearance comes at a time when the debate surrounding his traditional costume had become “unavoidable,” according to Albert van der Zeiljden of the Dutch Center for Folk Culture and Intangible Heritage.

“It’s completely ridiculous,” says Quinsy Gario, a poet and radio host who has spearheaded protests against classical depictions of Black Pete. His public demonstrations have been met with aggressive tweets from Black Pete supporters and even got Gario manhandled by police.

“Black Pete is a racist imposition on people,” Gario tells Vocativ by telephone from Amsterdam. “If somebody wants to celebrate Black Pete in their own home, then go right ahead. But at the moment he is celebrated during public festivities, and when he is used for advertisements, then it becomes a public issue.”

Some Black Pete opponents have gone as far as deeming it a human rights issue.

Verene Shepherd, a consultant with the United Nation’s human rights commission, sent a letter last year to the Dutch government saying that the depiction of Black Pete is “a throwback to slavery.”

Following the UN letter, two million Dutch fans of Black Pete joined a Facebook page backing the character. Prime Minister of the Netherlands Mark Rutte also weighed in, dismissing the claim that his country was racist for its portrayal of Black Pete.

“I do not recognize ourselves in that portrayal,” he told reporters last year.

While the feast of St. Nicholas goes back to the 15th century, the character of Black Pete is a relatively recent phenomenon. Jan Schenkman, a teacher from Amsterdam, helped create much of the current mythology of Sinterklaas in his 1850 story Saint Nicholas and His Servant. According to Schenkman, Sinterklaas lived in Spain and would travel to the Netherlands by steamboat every November to deliver presents to the country’s children in time for the feast on Dec. 5.

Accompanying him was Zwarte Piet, his dutiful servant who at the time was unnamed.

“In the 1900s, [Black Pete] was always considered to be the nice and friendly helper of St. Nicholas. St. Nick was stiff and old, but [Black Pete] was a much warmer figure,” explains van der Zeiljden. “Why he is black, that is very difficult to explain because the resources aren’t very clear on this subject.”

By the 1920s, popular depictions of Black Peter made him seem “dull-witted, clumsy and speaking broken-Dutch,” according to the St. Nicholas Center’s website. In an apparent attempt to soften the racial connotations, Pete’s dark skin would later be attributed to chimney soot, a result of having delivered presents to scores of children.

He was also given a promotion of sorts when his role was “changed from a servant to a modern manager,” according to the Dutch Center for Folk Culture and Intangible Heritage.

Over time Black Peter became a symbol of Dutch tradition, although he was criticized as “a racist holdover from the Netherlands’s colonial past,” in a New York Times editorial.

The cover of an old St. Nicholas tale.

Indeed, in the Dutch Center for Folk Culture and Intangible Heritage’s English language pamphlet about Sinterklaas, the group said that immigrants from Curacao, an island in the Dutch Caribbean, and Suriname, a former Dutch republic in northeastern South America, would “feel offended by the fact that [Black Pete] is the servant of Sinterklaas.”

Gario, who moved to Amsterdam from St. Marteen in 2002, said over time he came to realize Pete’s “racist assumptions” and began donning a T-shirt that read “Zwarte Piet is racisme.” He says that the controversy surrounding Black Pete generally picks up a month or two before the St. Nicholas feast, but the character has lately become such an issue that Gario now begins his protests in the summer. “I wore [that] shirt in June, and people were like ‘Dude, are you OK?'”

Last year, Gario tried to sue the city of Amsterdam for allowing people to dress up as Black Pete in its St. Nicholas parade. That suit, which was initially turned down, is currently under appeal.

In addition to the proposed “straight hair” look, there have been suggestions to change the color of Pete’s face from black to purple or red, although those, too, have been criticized.

Even if the suggestions were widely accepted, it’s unclear how they would be enforced during the feasts and parades of St. Nicholas. There are over 400 St. Nicholas committees in the Netherlands that organize the festivities on a local level.

Saint Nicholas  is escorted by his three Black Pete assistants during a traditional parade.

“You can’t make it a decree and tell all the Dutch, ‘This is the way Black Pete should be and this is how you celebrate these feasts,'” says the Dutch Center’s Albert van der Zeiljden. “It takes time to change.”