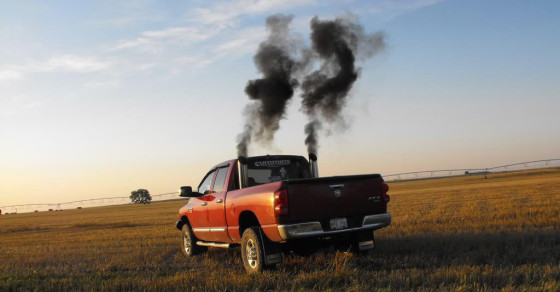 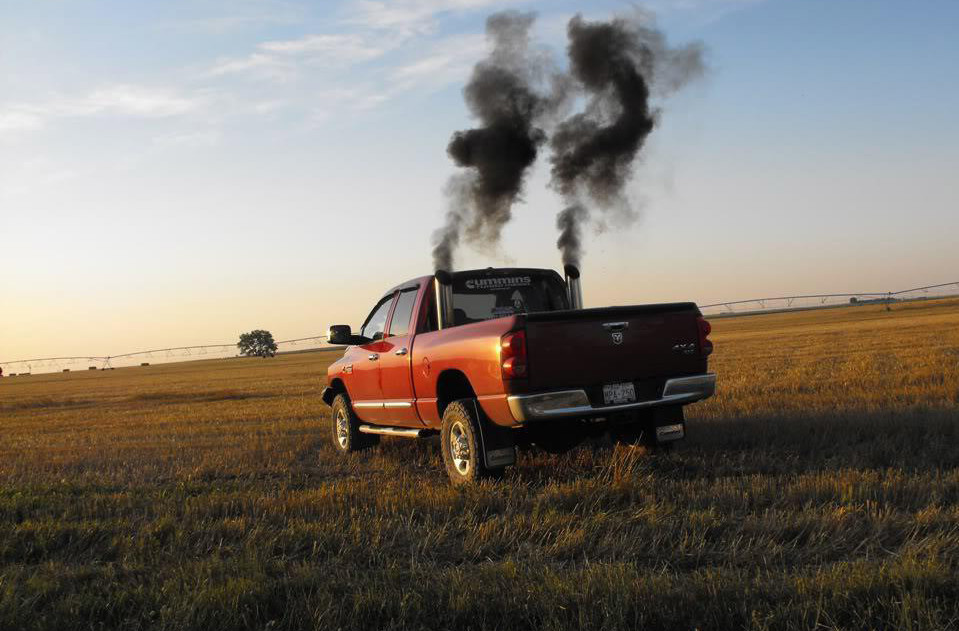 In small towns across America, manly men are customizing their jacked-up diesel trucks to intentionally emit giant plumes of toxic smoke every time they rev their engines. They call it “rollin’ coal,” and it’s something they do for fun.

An entire subculture has emerged on the Internet surrounding this soot-spewing pastime—where self-declared rednecks gather on Facebook pages (16,000 collective followers) Tumblers and Instagram (156,714 posts) to share photos and videos of their Dodge Rams and GM Silverados purposefully poisoning the sky. As one of their memes reads: “Roll, roll, rollin’ coal, let the hybrid see. A big black cloud. Exhaust that’s loud. Watch the city boy flee.”

Of course, there are things about diesel lovers and their trucks that the rest of us weren’t meant to understand. Like how the guttural noise of a grumbling engine sounds like music when the muffler is removed. Or how the higher the lift and the bigger the tires—the better the man. As Robbie, a 25-year-old mechanic at a diesel garage in South Carolina, puts it, “Your truck is not just something to get you from point A to point B. It’s who you are.” In other words, mushrooming clouds of diesel exhaust are just another way to show off your manhood.

Robbie has been rollin’ coal since he got his first truck 12 years ago, but he admits the allure is “kind of hard to put words on.” “It’s just fun,” he says. “Just driving and blowing smoke and having a good time.”

The pollution pageantry has its origins in Truck Pulls, a rural motorsport where diesel pickups challenge one another to see who can pull a weighted sled the farthest. In order to have an edge, drivers started modifying their trucks to dump excessive fuel into the motor, which gave them more horsepower, torque, speed and a better chance of winning. It also made their trucks emit black smoke, an affectation that apparently won the hearts of country boys everywhere. Today kids will spend anywhere from $1,000 to $5,000 modifying their pickups for this sole purpose; adding smoke stacks and smoke switches (which trick the engine into thinking it needs more gas), or even revamping the entire fuel system.

A Dodge doing its part.

Aside from being macho, the rollin’ coal culture is also a renegade one. Kids make a point of blowing smoke back at pedestrians, in addition to cop cars and rice burners (Japanese-made sedans), which can make it dangerously difficult to see out of the windshield. Diesel soot can also be a great road rage weapon should some wimpy looking Honda Civic ever piss you off. “If someone makes you mad, you can just roll coal, and it makes you feel better sometimes,” says Ryan, a high school senior who works at the diesel garage with Robbie. “The other day I did it to this kid who was driving a Mustang with his windows down, and it was awesome.”

The ultimate highway enemy, however, are “nature nuffies,” or people who drive hybrid cars, because apparently, pro-earth sentiment is an offense to the diesel-trucking lifestyle. “The feeling around here is that everyone who drives a small car is a liberal,” says Ryan. “I rolled coal on a Prius once just because they were tailing me.”

According to the Clean Air Taskforce, diesel exhaust is one of the country’s greatest sources of toxic pollutants and leads to 21,000 premature deaths each year, but even that won’t deter the coal rollers. “I’m not a scientist, but it couldn’t be too horrible,” Robbie says. “There are a lot of factories that are doing way worse than my truck.”

It should be said that not all diesel drivers roll coal. Older enthusiasts call it a waste of fuel and think it gives their kind a bad name, but like a tobacco habit, the younger set are willing to overlook the risks. “It’s bad for the environment. That’s definitely true,” says Ryan. “And some of the kids that have diesel trucks can look like tools. And you can cause a wreck, but everything else about it is pretty good.”