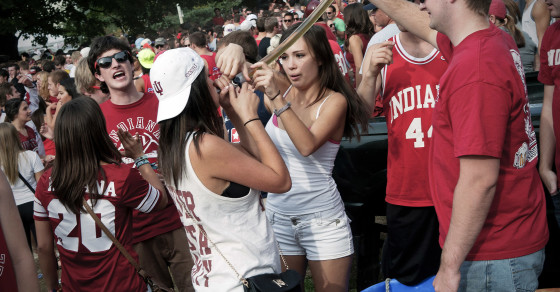 Colleges Profit by Getting Students Drunk off Jell-O Shots 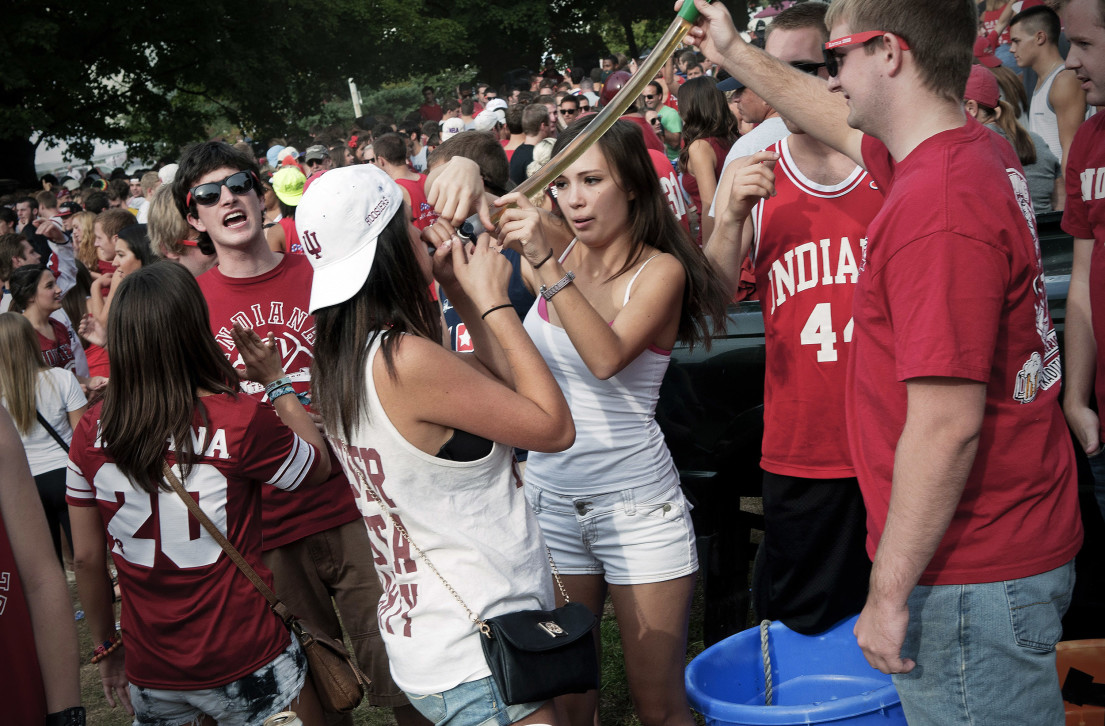 This weekend, the asphalt oceans outside America’s college football stadiums swelled once again with eager drunks chugging one last Solo cup before stumbling through the turnstiles. With NCAA football’s return, students can resume the time-honored tradition of tailgating so hard they puke on their shoes. And, thanks to Kraft Foods, that puke will have more Jell-O in it than ever this year.

After launching four university-themed Jell-O molds last year to great success, Kraft announced it would be adding 16 more universities to its data-tested “optimal portfolio” of officially branded shot kits this month. An otherwise innocuous snacking accessory, Jell-O molds lose their innocence the second the target customer goes from toddler to tailgater. There are few harder partying crowds than collegiate pre-gamers. For them, these university-sanctioned molds serve a single, fruit-flavored purpose—as a conduit for alcohol. Even Kraft acknowledges it.

Jell-O, which is owned by Kraft, now has marketing deals with 20 major universities to produce school-themed molds and flavors. A quick survey of our office confirms that no one anywhere has ever done a Jell-O shot without alcohol in it. "That would be weird," says a colleague.

“While we understand [Jell-O shots] may be popular among adults, the Jell-O brand does not advocate such behavior,” company spokesman Lynne Galia said in an e-mail. Of course, Kraft’s wink-wink stance on spiking Jell-O with vodka will have zero effect on fans, who’ve already added plenty of school spirit to their spirits this season. Students admit it, the media confirms it, Amazon reviewers gush about it and at least one preacher in Alabama fears it. No one has ever measured how much of Jell-O’s sales result in mini vodka bombs, but at least one study shows that Jell-O shots are “prevalent among youth, representing a substantial proportion of their alcohol intake.”

Buying Gators Jell-O molds for Jell-O shots when I visit bae at the frat house.

Dad just bought OU jello molds for him and I to do jello shots on game days... HYFR!! #BOOMERSOONER

The only participants unwilling to admit that college-branded Jell-O molds lead to college-branded binge drinking are the universities making money off of them. That’s no surprise. In an era when colleges are under significant pressure to clamp down on dangerous drinking on campus, even a tacit admission would expose these lucrative marketing deals for the cynical, duplicitous transactions they are. Colleges can’t admit to endorsing Jell-O shots because they’re in blatant violation of their own strict alcohol policies and public efforts to keep students safe.

So why slap their logos on a product that students only ever use to get fucked up? Vocativ asked representatives at all 20 universities. Four replied with emails that didn’t answer the question, and just one person, Alan Thomas from the University of Georgia, was willing to talk.

In deciding whether to license the molds, Thomas said, the possibility that they would be used to make Jell-O shots came up, but it didn’t prevent approval. “It was discussed, but it goes back to how this product is marketed” he said. “Our look at it was plain and simple. Jell-O is a reputable product that has been on retail shelves for years. What we don’t control is the individual end user and what they use the product for. What the product was designed for is gelatin.”

As much as Thomas would like to believe that beer-swilling, brat-pounding revelers are innocently downing virgin Jell-O jigglers for their great taste, the scenario triggers bullshit alarms for just about everyone else who’s seen the booze-soaked tailgating scene at any major university.

“It would be nice if the Jell-O molds were simply used so everybody ate ample fruit at their tailgate,” said Dr. George Koob, the director of the National Institute on Alcohol Abuse and Alcoholism (NIAAA), “but these are going to be used for ingesting alcohol.”

Koob firmly believes it’s “not a good idea” for universities to officially recognize a product that makes binge drinking easier. College is an environment where drinking leads to nearly 2,000 deaths, 700,000 assaults and 100,000 cases of sexual assault per year. Given the dire state of substance abuse on campus, using university logos to shill a product that at least 20 percent of all college students regularly use to facilitate inebriation makes Koob “queasy.”

The problem with Jell-O shots specifically, Koob said, is that “they mask the flavor of alcohol so people don’t notice that they’re drinking.” When people load up on booze hidden inside Jell-O they don’t feel the cues that they’re reaching their limit. “The consequence of that can be overdose,” Koob said.

That’s not a controversial opinion. Few would argue that Jell-O shots aren’t dangerous, and some universities, including Albany and Notre Dame, ban them entirely on campus. Ohio State University, which has licensed its iconic “O” logo to Kraft, doesn’t mention Jell-O shots in its alcohol policy, but the school’s Greek council specifically prohibits them at fraternity and sorority functions.

For all the potential harm that comes from masking hard alcohol in candy-flavored, bite-sized team mascots, it’s pretty easy to see why colleges prefer to play dumb. The retail marketplace for officially-licensed collegiate products in 2013 was $4.59 billion. Even the colleges partnering with Kraft acknowledge that Jell-O shots are dangerous—they just won’t acknowledge that that’s what these particular Jell-O shot trays are being used for. As UGA’s Thomas told me, “It’s not something that we would approve of.” These molds, he insisted, are for regular old Jell-O.

The University of North Carolina’s spokesperson spun a similar tale over email, suggesting the molds are as harmless as Pop Tarts. “The product proposal went through our regular trademark licensing program review process. The conclusion was that the Jell-O mold was a family- and fan-friendly product that shows school pride,” wrote UNC’s Karen Moon. “It was consistent with other recently approved products, including a school-branded line of Pop Tarts.”

Of course, Pop Tarts have never been touted as the ideal way to bring “out the flashin boobies at the tailgater.”

The new Jell-O molds are perhaps the most glaring example, but they aren’t the only university-licensed products that contribute to binge drinking. The University of Alabama has a rather restrictive alcohol policy that bans drinking games and possession of shot glasses by students under 21, yet the school’s gift shop will sell a shot glass to anyone of any age. Alabama has also licensed table tennis balls and a “tailgate table” that just so happens to be the exact dimensions of an official beer pong table.

Georgia licenses the balls, too, while at the same time telling students to “avoid drinking games,” along with dozens of other schools. Merchants selling the balls on Amazon and eBay market them for what they really are—beer pong balls. But plausible deniability exists, which is why the University of Florida can ban drinking games but license table tennis balls and a tailgate table, which is sold here, here and here as a “beer pong table.” A University of Florida spokesperson did not reply when asked to explain how licensing these products aligns with the school’s stated goal of reducing high risk drinking.