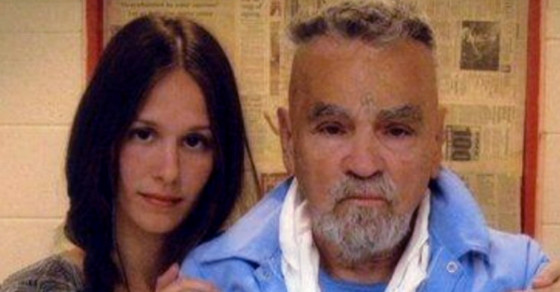 No, That’s Not Charles Manson’s Real Wedding Registry—We Asked Him
By Molly Fitzpatrick

No, That’s Not Charles Manson’s Real Wedding Registry—We Asked Him

Charles Manson and his fiancée, Star.

Lest the swastika carved into his forehead gives you the wrong idea, Charles Manson is a notorious cult leader responsible for orchestrating the murders of at least seven victims in the 1960s. Now 80, he recently obtained a marriage license to wed a 26-year-old disciple named Star. Yesterday, the Internet stumbled on a surprisingly normal (tasteful, even!) wedding registry in the couple’s names at Bed Bath & Beyond. It includes a $234.99 Waterford crystal cake plate and a $99.99 decorative cowboy boot pitcher. Horrifying mass murderers: They’re just like us.

Bizarre? Definitely. Plausible? Not so much. Charles Manson, who’s been in prison since 1971, can’t expect parole until hell freezes over, pigs fly and the pope shits in the woods—not necessarily in that order—so it’s hard to imagine he’d be getting much use out of this charming butterfly teapot. We reached out to the webmaster of Manson Direct, an official support site for the convict, who confirmed in an email that this is “ABSOLUTELY” [sic] not the work of Manson or his spooky child bride (our words, not theirs), who haven’t registered anywhere.

Guess you can hold on to that cake plate until Son of Sam ties the knot.