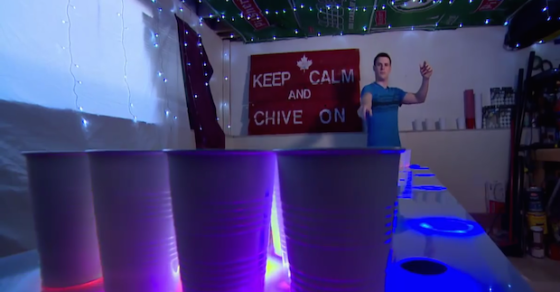 And all it took was a “sophisticated” beer pong table equipped with LED lights, a pair of ball washers and a touch-sensitive table top that can keep score. “It’s overkill…for sure,” Nybo told the Canadian Broadcast Corporation. “I just had to do it, I guess.”

His fellow countrymen couldn’t be prouder. The CBC heralded Nybo’s beer pong table as “a great Canadian invention” on Tuesday and published a video to Facebook. The piece has since generated record traffic numbers online, with nearly 22 million views and over 390,000 shares.

Nybo’s brother, Curtis, offered the CBC some insight into what’s driving the buzz behind the next-level drinking game accessory. “Everybody likes shiny lights,” he said. “So it makes everything a little bit more interesting.”

There’s just one small hiccup with the CBC story. A group of U.S. college students from West Virginia already created a near-identical beer pong table. Back in 2008.

“This town built a memorial the wrong guy” (Vocativ)

“The capital of good news” (Vocativ)