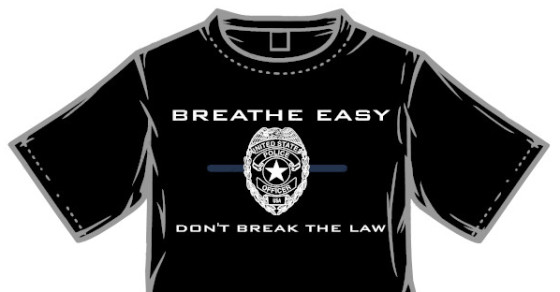 UPDATE: Three South Bend council members have asked Jason Barthel to stop selling his “divisive” T-shirts. “The sale of T-shirts bearing this message damages the goal of unity and further divides our community,” reads a statement.

In honor of Eric Garner, the father of six who lost his life after a police officer in New York’s Staten Island put him in an illegal chokehold, “I can’t breathe” has become the rally cry for hundreds of thousands of people across the U.S. to protest police brutality. In recent weeks, even members of several high-profile basketball teams, including The Phoenix Suns, Charlotte Hornets, Brooklyn Nets—a move facilitated by Jay-Z—and most recently Notre Dame Women’s Basketball, have been seen wearing T-shirts emblazoned with the phrase.

Now Jason Barthel, a police corporal and owner of South Bend Uniform in Mishawaka, Indiana, has responded by releasing a line of T-shirts, yours for only $7.99, with the words: “Breathe easy—don’t break the law.”

Barthel says the “I can’t breathe” T-shirts are “confrontational,” but insists his version is supposed to be “uniting and positive.” And though he claims that feedback on his T-shirts has been 85 percent positive, Barthel felt compelled to post the following message on his company’s Facebook page:

However, not everyone finds the message so encouraging. The most liked response to a post about the release of the T-shirts comes from Rj Flatlinemedia, who writes: “I almost forgot how ‘racially insensitive’ the people in our community are. Thanks for showing the community that it’s okay for the police to kill a man for selling single cigarettes. You guys are true assholes!”