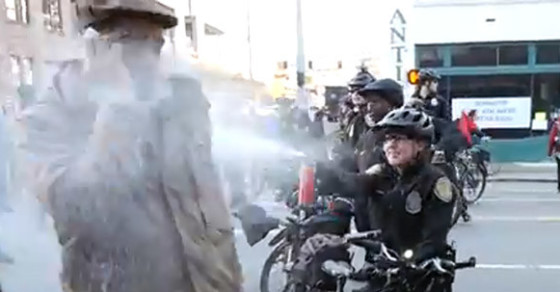 A Seattle high school teacher and activist filed a $500,000 claim against the city on Wednesday, alleging that police unlawfully pepper-sprayed him earlier this month at a Martin Luther King Jr. Day rally. A video of the incident was uploaded to YouTube on the same day that the teacher, Jesse Hagopian, filed his claim.

The footage shows Hagopian casually talking on his cellphone in the South Lake Union area on Jan. 19 when an officer with the Seattle Police Department appears to indiscriminately shoot pepper spray at a group of people who had attended a peaceful demonstration. Hagopian’s lawyer, former Seattle NAACP President James Bible, said his client had just delivered a #BlackLivesMatter speech at the rally.

The claim against the department landed on the same day that Seattle police issued an apology for arresting a black man last year for carrying a golf club.

Hagopian teaches history at Garfield High School and serves as an adviser at the school’s Black Student Union. A self-described social justice activist, he has also edited a book that is critical of standardized testing and blogs about Haitian human rights.