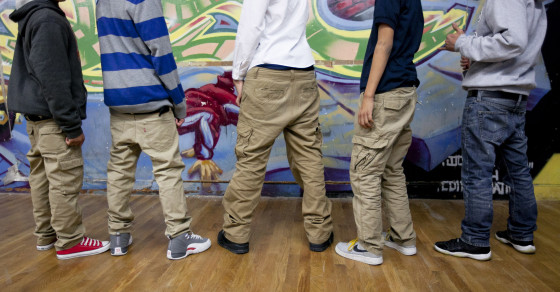 Another Mayor Is Set to Ban Saggy Pants
By Emily Levy

Another Mayor Is Set to Ban Saggy Pants 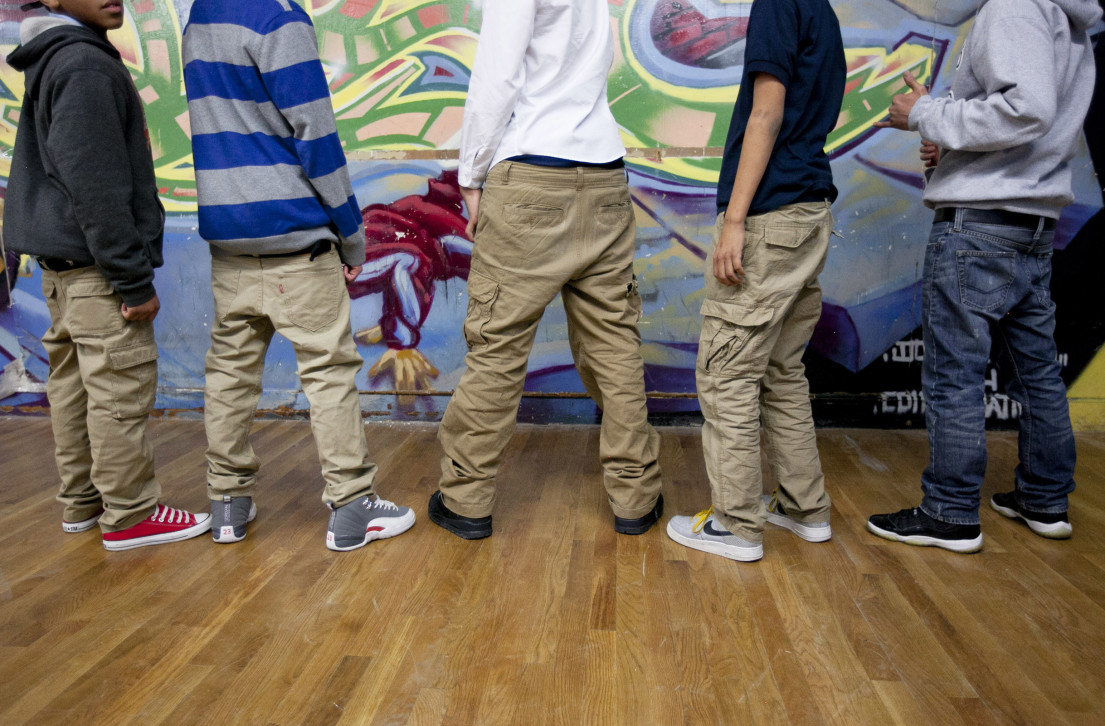 Sagging pants, the kind that hang low and allow for a peek of bunched-up boxers, first made a name for themselves—at least according to Internet legend—in prisons. They soon made their way into hip-hop culture, and ultimately into mainstream fashion, drooping lower and lower until attached belts reached, in some cases at least, knee-level. But in a growing number of towns and cities across the country, said bottoms are punishable by fine, and this is probably a very bad thing for freedom of dress (and freedom of everything, for that matter).

The latest town to initiate a ban on sag: Pikeville, Tennessee. Last week, Mayor Phil Cagle approved the first ordinance to eradicate drooping pants—any bottoms that sink “more than 3 inches below the top of the hips (crest of the ilium)”—by way of $25, then $50, fines. Cagle’s reasoning: evidence that saggy pants are “injurious to the health of the wearer” and induce “improper gait.”

But banning bottoms for tenuous reasons like these is a potentially scary trend, particularly in the South, mostly because the bans aren’t always as arbitrary as they initially appear. Eliminating a town’s overall level of sag is often a vehicle for targeting minority groups, especially in places where said pants are a means of racial profiling. Whether the laws are even constitutional, given First Amendment rights, is cause for debate.

While the Pikeville ban on “sagging britches” likely won’t go into effect for another month, Vocativ reached out to Mayor Cagle with questions on why towns care so much about their residents’ pants.

Tell us about your decision to ban saggy pants.

The ordinance reads as an indecent exposure act. We have seven listings of different indecency acts that we’re going to be citing people on. It’s not an attack on saggy pants, unless they’re indecent. If you walk up and down the streets showing your underwear or skin, that’s indecent. If you can wear your saggy pants but you’ve got a shirt pulled down over your behind, then there’s no violation. This isn’t a serious problem in our town. Our young people, they don’t dress that way, but we have some maybe moving in, and we’re not gonna let that happen. We live in a God-loving town, and I’m not gonna be a preacher, but I’m not gonna let people run around looking indecent.

Was there a particular reason why you wanted to ban the pants?

We have had a few young people breeze through our town or move in who are pretty exposed. In the last three weeks or so, I had my police chief tell a guy—he was a white guy—that his britches were pulled down too low. He was showing 2 or 3 inches of the top of his crack, plain as it is. I asked my police officer to tell him to put his shirt on, or get off the street. A couple days later, we had three more guys walk around, one with a belt around his knees. We told those guys: ‘You need to pull your pants up.’ When the police chief left, he pulled them back down. We didn’t have any types of ordinances or laws in our city to do anything more than ask them to pull their pants up. So we’re gonna put something in writing so that our police department knows what they’re expected to do.

There’s indecent exposure laws on the books all over the United States. Where does it start and where does it end? We have gotten so relaxed on how we let people dress and walk the streets. If we change as much over the next 20 years as we have in the last 20 years, I don’t doubt people will walk around the streets naked. It’s gotten out of hand, and we’ve tolerated it. We ask that when you walk our streets, you dress appropriately. If think you’re gonna walk our streets with your behind showing, no ma’am.

"If we change as much over the next 20 years as we have in the last 20 years, I don’t doubt people will walk around the streets naked."   —Pikeville, Tennessee, Mayor Philip Cagle

Often laws like these target certain racial groups. Is that your goal?

In our little town here, we have black people. Probably some of my best friends that I’ve ever had are black. Our black people don’t dress this way. I would never use this to discriminate or to single anybody out. I don’t believe in it. I respect any person who can respect [sic] themselves. If they dress and act appropriately, they’ll get total respect from me.

That came from an ordinance that was passed in Atlanta, Georgia. We used that as a guideline. I’ve had some feedback from different doctors saying it does cause different types of problems. I don’t see how it could be good for you. If you Google “saggy pants,” you’ll see some doctors who have commented. [Pulls up a study from BlackDoctor.org] It says right here that a two-year study led by Dr. Mark Oliver Mansbach “concluded that the continuous wearing of saggy pants severely impacts sexual performance.”

Do you believe the doctors?

When do you expect the law to pass?

We have to do two more readings in order for the law to be final. Next meeting, we’ll pass the second reading and then come back and do the third reading. We’ll put this into effect in one more month. I want to get it done and get it behind us. I can’t worry about what goes on in Atlanta, Georgia, and what goes on in New York. As long as our people are happy and content, I’m not gonna single anybody else out. But I’m not gonna let a few people run around indecent and upsetting my citizens.