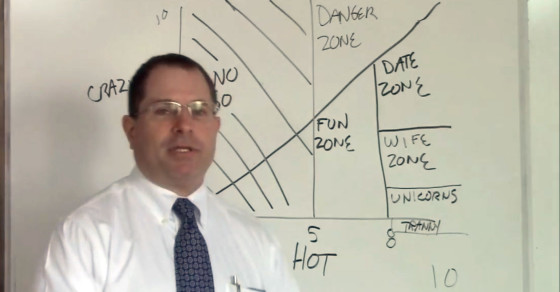 This Amateur Einstein Has the Ladies All Figured Out 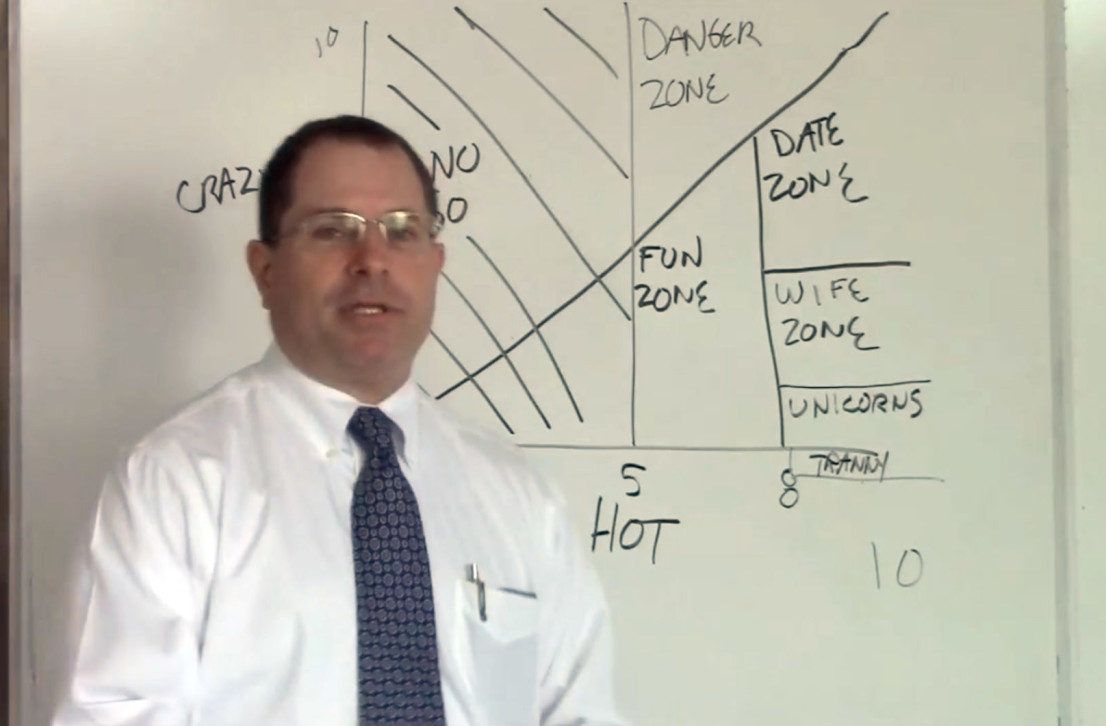 Leave it to a 46-year-old suburban dad to crack the complex code that is womankind. Dana McLendon, a pistol-packing lawyer from Tennessee who gives off more of an algebra teacher vibe, appears in a YouTube video posted last week by Tactical Response CEO James Yeager, the defense-training expert best known for threatening to “start killing people” if the government tightened gun control laws. Calling upon all the wisdom he’s gained about women, dating and finding the one in his half-century on earth, McLendon outlines what he calls his “Universal Hot Crazy Matrix,” which is “everything a young man needs to know about women” summarized in one convenient infographic.

As much as we really wanted to hate it, we have to hand it to McLendon—though his chart pushes all the uncomfortable buttons in the politically incorrect, misogynistic ways you’d expect, it kind of works. As a female viewer, it’s sort of like being a redneck who likes Jeff Foxworthy. And the man has a gift for deadpan delivery.

McLendon’s matrix begins with his “hot” and “crazy” axes, with hot measured on the usual scale of one to 10 and crazy starting at four, “because of course there’s no such thing as a woman who is not at least a four crazy.” The “hot-crazy line” is drawn diagonally, dividing the grid into various quadrants of desirability, which he unpacks for viewers with the cold, hard logic of a pragmatist. McLendon advises that any woman below a five in hotness be automatically relegated to the “No Go Zone” because “life is better this way.”

McLendon is a real straight shooter when it comes to romantic advice.

The No Go Zone abuts the “Fun Zone,” which is reserved for women who fall below the crazy line and between five and eight on the hot scale. “You can hang out here and meet these girls and spend time with them,” McLendon says. “But keep in mind…you want to move out of the Fun Zone to a more permanent location.”

Above the Fun Zone is the “Danger Zone,” which is where you find your classic stage-four clingers. “This includes your redheads, your strippers, anyone named Tiffany and hair dressers,” he says. “This is where your car gets keyed, you get a bunny in the pot, you’re tires get slashed and you end up in jail.”

McLendon and the lady he located in the Wife Zone.

The sweet spots in McLendon’s grid are the “Date Zone,” where the women are “good looking” (eight and above) and “reasonably not crazy most of the time” (below a seven), and the “Wife Zone,” where the candidates are still hot but just a little less crazy than the daters. “When you meet this girl,” McLendon says. “You should consider a long-term relationship.” As for the perfect 10s with crazy ratings below five—he calls them unicorns because “these things don’t exist.”

Be sure to stay tuned for the bonus section at the end, when McLendon provides his matrix for men, which is a much simpler graphic that takes into account only cuteness and money as factors women consider (I smell the patriarchy). The No Go Zone here is composed of broke guys who aren’t cute, while the Date Zone includes the cute but broke, and the “Husband Zone” is made up of anyone with money “because once you cross a certain line…it is no longer relevant how hot you are.” Did we mention he’s a lawyer?