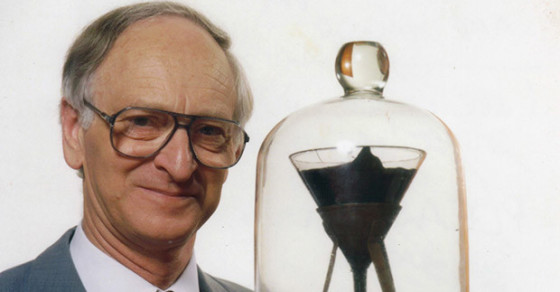 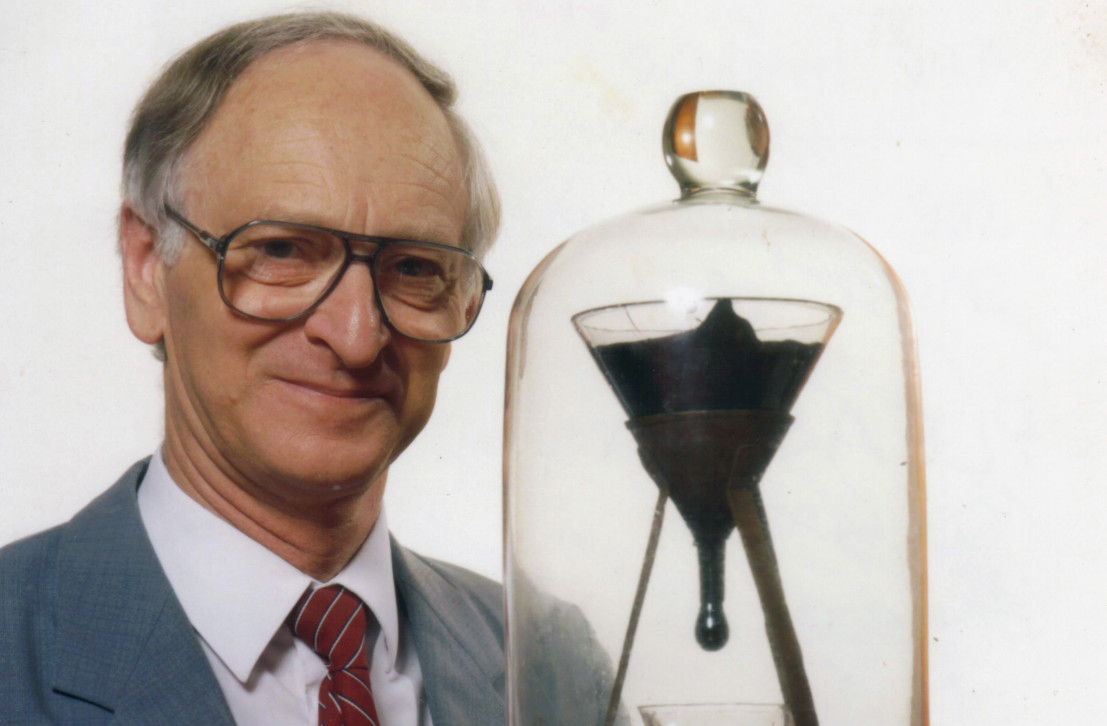 If professor John Mainstone were still alive today, he could tell you that there are far more excruciating things than watching paint dry. Like watching pitch drop. For 52 years, the Australian physics professor stood watch over what is known as the world’s longest-running experiment—to observe the moment when gravity works its magic on a stubbornly viscose solid—but in a cruel and cosmic joke, he died just eight months before the damn pitch dropped on camera.

Set up in 1927 by another scientist at Australia’s University of Queensland, the pitch drop experiment was designed to show students how some solids can flow as liquids by placing pitch—the tar-like material used to patch boats—in a funnel and waiting for the rock-hard hydrocarbon to turn into a globule. The catch is that pitch, which looks and feels like stone at room temperature, likes to take its sweet time. And we mean sweet. With a viscosity 230 billions times that of water, the substance drips at an average of once every decade. In other words, imagine turning over an open jar of the world’s thickest, densest molasses and waiting 10 years for it to hit the plate.

Though nine recorded drops have fallen in the last century, until last week, no one had actually seen it happen, which is what everyone at Queensland has been waiting for. This time, students were able to observe the miracle drip, both in real life and on a live feed put out by the university. After 13 years of foreplay, the grand event lasted only a tenth of a second, but devoted lovers of physics seemed to be satisfied. In what has to be the worst case of science blue balls in history, Mainstone, the pitch’s custodian since 1961, failed to catch the five drops that happened during his lifetime.

(The University of Queensland)

But it wasn’t for lack of trying. After missing the party in 1962 and 1970, Mainstone decided to dedicate an entire weekend to watching the pitch in 1979, when a drip appeared imminent—only to return home Saturday night because of exhaustion. He missed it by a day. In 1988, the fateful event happened in the five minutes Mainstone left to grab a cup of tea. The man simply lacked discipline. By 2000, he was no doubt aware of his personal shortcomings and set up a webcam to film the crucial moment, but a tropical storm caused a 20-minute power outrage, shutting off the camera just as the glorious globule fell (seriously). He just couldn’t catch a drip.

For his perseverance, Mainstone was awarded an Ig Noble Prize in 2005 for “research that makes you laugh and think” and a Guinness Book of World Records recognition for the longest-running experiment in history, beating out other oldie contenders like an electric bell that has been ringing since 1840 and a Massachusetts heart study that has been in the works for 66 years.

There also happens to be another historic pitch drop experiment at Trinity College in Dublin, which is 17 years younger. Last July, it gave way to the first drop caught on camera, which is fortunately viewable in time lapse. Even the final dribble of the droplet takes forever.

Australian news outlets were already reporting on last week’s drop two years ago, saying it could happen “anywhere between the next five seconds and the next 12 months.” According to Mainstone, the pitch’s slowed descent is a consequence of modern convenience—namely, the lab’s air-conditioning, which has made its composition thicker.

Sadly, the aging professor Mainstone just couldn’t keep pace with the leisurely experiment and died of a stroke in August of 2013—the ninth drop just a hair or two away from finally breaking free.

(The University of Queensland)

According to the pitch drop’s current custodian, the experiment looks to have about 80 years left in it, with the 10th drop likely occurring in the next 13 years. Let the fun begin.